You are here: Home / Home / Carousel / OPINION: How serving as a Boy Scout made me the man I am today
Share this... 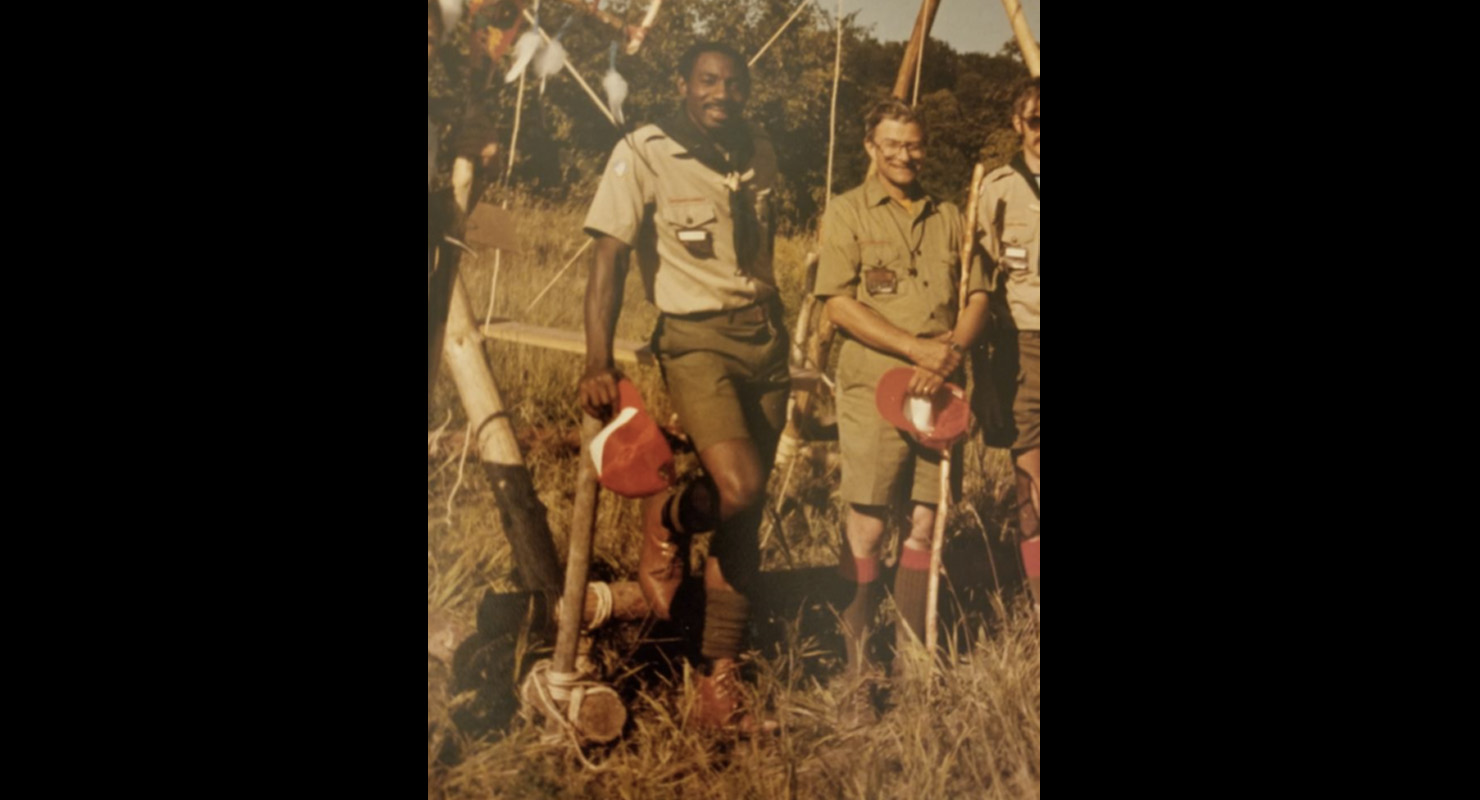 Charles Robinson Sr. participating in Wood Badge Patrol in 1984, which included two weeks in the wilderness with few provisions. According to him, this was “the best training I’ve had in life.” (Photo provided by Charles Robinson Sr.)

Charles Robinson Sr. is a lawyer, mediator and resident of the Borchert Field neighborhood. For Black History Month, he recalls the profound impact the Boy Scouts have had on his life, as a child growing up in Milwaukee and as an adult seeking to uplift his community.

The Boy Scouts of America gave me some of the best training I’ve had in life, as a boy and as an adult volunteer. However, if you were to picture the stereotype of “Boy Scout” — especially in Southeastern Wisconsin — I might not be the person who comes to mind.

Black boys and men in Milwaukee have a long, proud tradition with Boy Scouts, and I am honored to be part of that history.

As a child growing up during the ‘60s in Milwaukee, at the age of 8, I was running with a teenage gang. The leader lived in the downstairs apartment with his family. He and his brothers treated me like a little brother. We had a clubhouse in the attic where we played checkers, card games, and even had an electric train set. There were tests and rituals I had to pass that were designed to make me tough. I endured those challenges and rituals because I wanted to belong.

Eventually, I was “scared straight” and my family moved. Fortunately, I discovered another gang — Troop 75.

My church had no scouting program, so I joined the Boy Scout program at Mt. Zion Baptist Church, which was located on 9th and Brown Streets at the time. I had to walk a few miles for the weekly meetings. I passed my Tenderfoot merit badge requirements during my first night with Troop 75, but I wasn’t old enough to join just yet — I had to wait two weeks to meet the age requirement.

I’m so glad I went back to officially become a Boy Scout. My life was transformed.

Scoutmaster Lawrence Taylor was our legendary leader and he inspired me. Living around the corner, he shared his life and family time with us. He coached many boys in pursuit of the Eagle Award, the highest rank in scouting.

Although I grew up in a very tough area of town, I was inside the wonderful world of scouting. My grades changed from C’s to A’s and I was appointed captain of the crossing guard cadets at school.

The scouting experience helped to shape my character and it kept me out of trouble. I recall my first hiking trip. I was up before dawn and wide awake. My grandmother, Ethel, seemed just as excited as I was. Already waiting in the living room, she helped me pack my gear for the 25-mile hike to achieve the hiking merit badge. Arriving at our destination that evening, we had “Rock Soup” made from scratch. We put everything we packed to eat into the mix, including a rock for the brand name. That 25-mile hike, at age 12, was challenging, high adventure and ritualistic.

The following year, during winter camp, Silver Lake was frozen and we walked across for a shortcut back to camp. Suddenly, the ice began to crack and we ran for our lives. We made it across safely, including Theophilus, who was a huge, heavy kid. We blamed him for cracking the ice. We still laugh about that experience today. There are so many stories.

Approximately 30 years later, I was determined to have a Boy Scout program at my church. A recent graduate of the University of Wisconsin Law School, I wanted to give back to my community, which was the source of my success. So I became the Scoutmaster, as well as district commissioner. It was at that same campsite near Silver Lake that my relationship with my stepson had a breakthrough.

My first milestone was finding and training 16 commissioners to serve 102 scout programs in the inner city during the early 80s. These commissioners were extraordinary. The scouting partners in schools, churches and community-based organizations were able to get the training and other resources they needed to deliver a quality program.

My next milestone was reactivating Troop 445 at St. Mark’s A.M.E., a renowned black church. The troop is one of the oldest scouting programs in the state of Wisconsin, but was inactive. I found several adult Eagle Scouts in the church and recruited them to become commissioners and scout leaders.

St. Mark’s was filled with talented people who never declined my requests to support scouting. Led by Pastor Lovell Johnson, there were many middle class families and professional people who wanted their church to be viable in their community. It was a thrill to come before the congregation during a service when it was time for a charter presentation ceremony. Troop 445 went from inactive to one of the best programs right away. Napoleon White, who recently passed, was a legendary Scoutmaster there for approximately 30 years.

Today, I’m very proud that the legacy continues with my grandson, who is about to become an Eagle Scout in Minnesota.

Since my days involved in scouting, participation has drastically decreased in the inner city. Some of the reasons commonly offered for this are a breakdown in traditional family structure, scandals, gender discrimination allegations and socioeconomic conditions. Additionally, school desegregation via busing interrupted many school-based programs.

If it takes a village to raise a child, then, scouting was a part of that village for us.