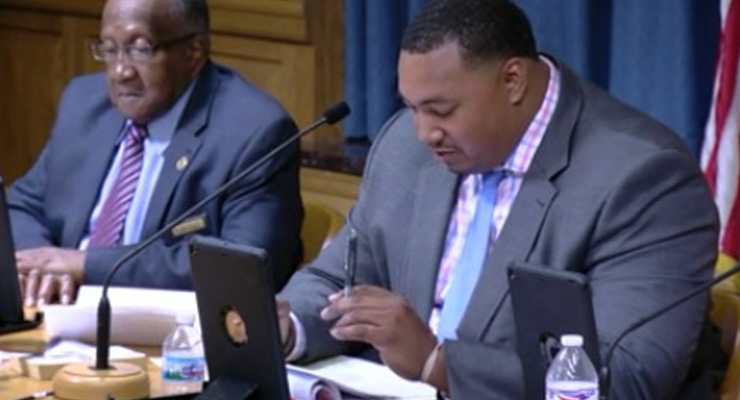 “I’ve already talked to the Ethics Board about all these issues. The stuff they’re alleging has already been dealt with, and we have an understanding,” Fire and Police Commission Chairman Steven DeVougas tells NNS. (Photo courtesy of TMJ4)

The president of the Milwaukee Police Association has filed a complaint with the City of Milwaukee Ethics Board that alleges several violations by Fire and Police Commission Chairman Steven DeVougas.

The allegations are related to DeVougas’ representation of prominent Milwaukee developer Kalan Haywood Sr., who has been accused of sexual assault and questioned by the Milwaukee Police Department but not charged.

In a leaked video, Haywood Sr. is shown being questioned by Milwaukee police at the Sojourner Family Peace Center without the knowledge of the center’s executive director.

He was accompanied by DeVougas. Haywood Sr., who has denied the sexual assault allegations, is the founder of the Haywood Group, a prominent real estate development, investment and consulting firm that has received millions of dollars in loans other support from the city.

“As DeVougas has authority over the entire MPD, his mere presence/involvement in an MPD criminal investigation presents a clear conflict of interest. DeVougas’ representation of Haywood appears to have been done to influence/intimidate MPD investigators and to provide his client with a benefit the average person could not get,” read part of the complaint filed Tuesday by Dale Boorman Jr., president of the Milwaukee Police Association. The Milwaukee Police Association has publicly called for the resignation or removal of DeVougas as commissioner.

The complaint comes less than three weeks after DeVougas and other members of the FPC approved an independent investigation to look into the leak of information related to the Haywood case.

On Wednesday, DeVougas told the Milwaukee Neighborhood News Service that he requested an advisory opinion from the Ethics Board regarding the allegations and met with board members Friday.

“I’ve already talked to the Ethics Board about all these issues. The stuff they’re alleging has already been dealt with, and we have an understanding,” he said. DeVougas also referred to a memo from the City Attorney’s Office regarding the issue.

“The FPC rules do not address commissioner conflicts of interest, nor do they contain standards of conduct for commissioners. In short, there is no FPC rule of which we are aware that Mr. DeVougas could have violated,” read part of the memo.

The City Attorney’s Office referred the issue to the state’s Office of Lawyer Regulation, which decided against opening a formal investigation.

In early February, the FPC approved a resolution to create ethical rules and a code of conduct, largely because of the Haywood controversy.

That leak of the video drew harsh criticism from Mayor Tom Barrett, Sen. Lena Taylor, members of the Common Council and others. They condemned the fact that the interview took place at a location that serves exploited women, and that sensitive information about an alleged sexual assault was released.

DeVougas, a lawyer, said he has contracts with the Haywood Group and many other clients through his real-estate firm.

“I don’t know what the Milwaukee Police Association’s problem with me is but I would love to have a conversation with them. [The MPA] is just looking for something for any reason to come at me when they have their own issues,” DeVougas said Wednesday.

The Fire and Police Commission is holding a special meeting on Thursday, Feb. 27 to select an independent investigator to review the case against the MPD. The meeting will take place at City Hall in Room 301-B at 5:30 p.m. DeVougas has recused himself from being involved in that meeting and the investigation into the MPD.