You are here: Home / Home / Carousel / Controversy erupts after accusations of coronavirus-related price gouging at El Rey
Share this... 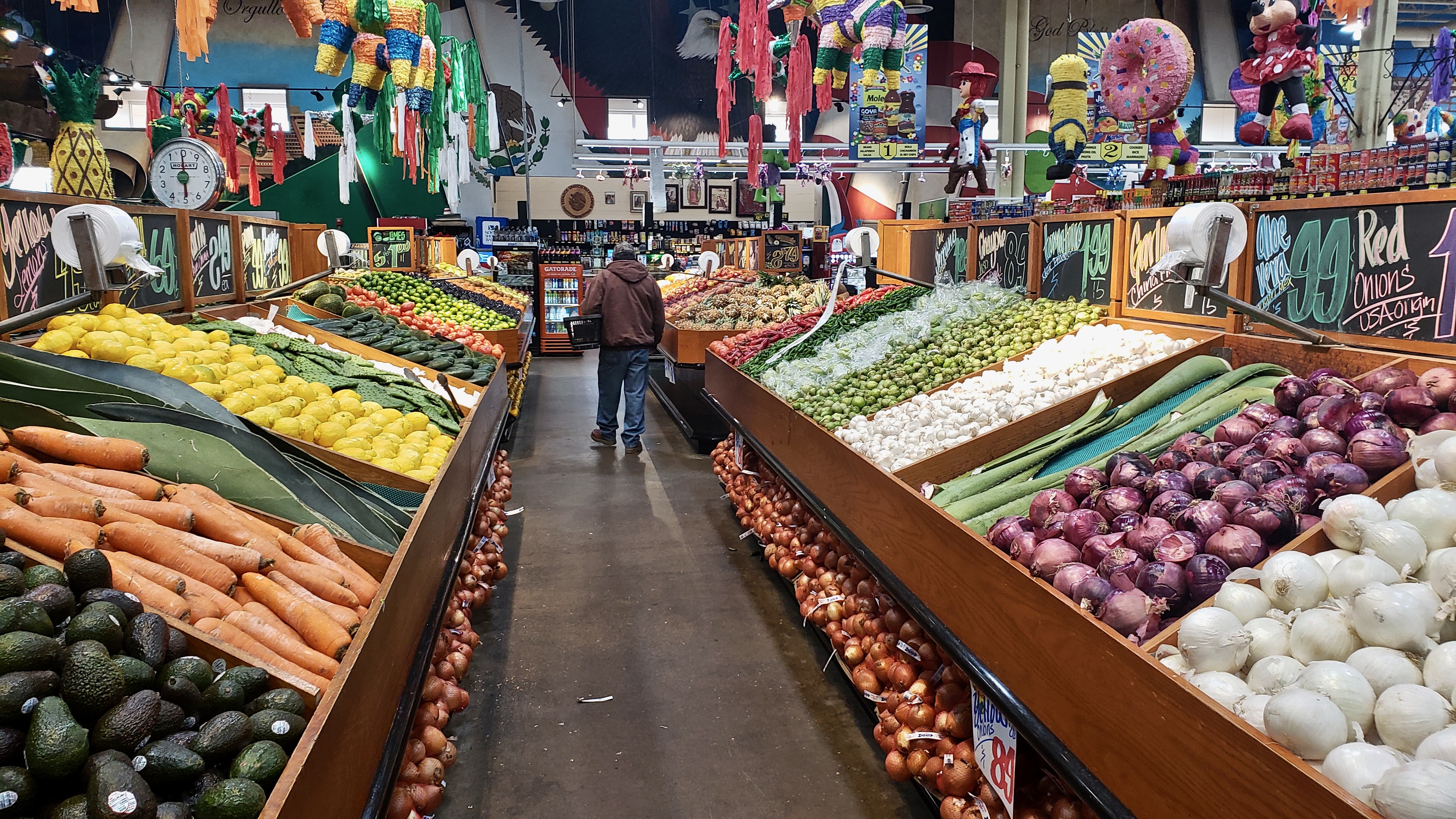 Allegations of price gouging at El Rey led to a sharp rebuttal from the store’s representatives. (Photo by Edgar Mendez)

Editor’s note: This story has been updated to clarify that William Horst is not the owner of the Golden Chicken restaurant located at 3032 S 13th St. despite a claim he made on Facebook. Barry Bloom says he’s owned the restaurant for nearly two years.

Ground beef, chicken fajita meat, tilapia fillets and avocados were on sale this week at El Rey, Milwaukee’s oldest and largest Hispanic grocery store chain. But it was a 24 pack of 23-ounce Nature’s Crystal bottled waters selling for $19.99 that had some patrons crying foul over the weekend.

In a Facebook post shared hundreds of times, but now removed, shoppers accused the iconic company of overpricing items in high demand because of  COVID-19, the new coronavirus disease.

“I thought price gouging was illegal in WI?” read one post. “They’re taking advantage of the community and the situation,” read another.

Others also accused the store of overpricing other sought after items such as bleach. 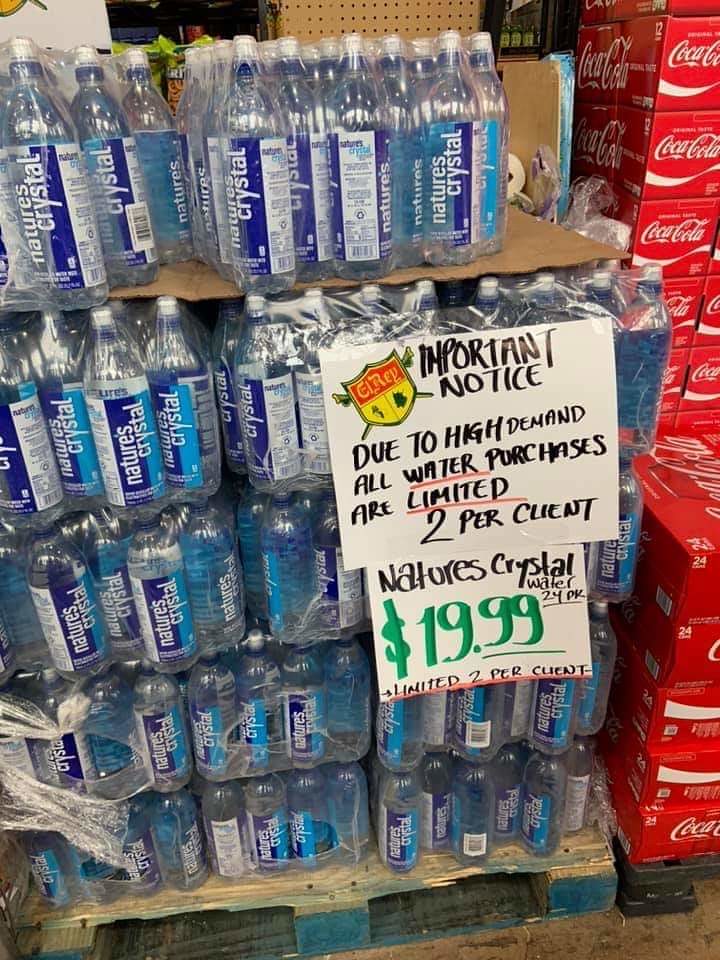 This photo taken at El Rey over the weekend sparked accusations of price gouging. (Screenshot from Facebook)

“We should boycott El Rey $10 for bleach $20 for case of water, burn that place down,” he wrote in a Facebook post. Horst could not immediately be reached for comment, but according to subsequent social media posts, he later apologized.

However, Barry Bloom says he’s owned the restaurant for nearly two years, adding: “As the current owner, I want to make it clear that the former owner’s comments do not reflect in any way the opinion or feelings of me or my co-workers,” Bloom told NNS. “Rather, we choose to remain positive and try to be good neighbors and members of the community, wishing and hoping the same for our city, state and country during this challenging time.”

“It has come to mine and Ernesto’s attention that our name, EL REY, is being dragged through the mud,” she wrote Saturday in a Facebook post shared more than 435 times.

She explained that the water bottles were meant to be sold individually for 89 cents, adding an employee took it upon himself to package it together for $19.99. Villareal also mentioned that El Rey had a 24 pack of water for $4.99 but that it had already sold out.

El Rey, which first opened 42 years ago on what is now S. Cesar E. Chavez Drive by Ernesto Villareal and his brother Heriberto,  issued a statement addressing the controversy Sunday.

“I can assure you that increasing margins in this time of need is not on El Rey’s agenda at any location . . .  We have desperately tried to keep our shelves stocked as much as possible this week for you and are actively searching for many everyday products that our normal suppliers are out of stock,” the store said in a statement. “It has become apparent that the costs on these items have and will be volatile. We will continue to search for the best deals we can and provide the cheapest prices we are capable of.”

The company has four stores and a tortilla factory in Milwaukee.

Many have jumped to the defense of El Rey, which has long been a major philanthropic supporter in the city.

“El Rey is the only grocery store who has provided free dinner for Hip Hop Chess Club of Wisconsin … This company has a place in our community, and it is not like them to take, they give,” read one post.

“We love El Rey’s and the family! Thank you for all you do for our community,” read another.

Others added that prices at El Rey on specific items, including cleaning supplies, are typically on the high side, and that they don’t think the store is gouging customers. At the El Rey store on Cesar E. Chavez Drive on Monday morning, the price on a 3.57-liter bottle of Clorox bleach was $6.99, while at Walmart the same bottle retails for $4.14.

Concerns over price gouging continue to grow across the country as shoppers report shelves empty of products such as toilet paper and hand sanitizer.

A Wisconsin law against price gouging went into effect for the first time in history when Gov. Tony Evers declared a public health emergency on March 12.

Ti Gauger, public information officer for the Wisconsin Department of Agriculture, Trade and Consumer Protection, said her department had received eight complaints about price gouging before last week’s emergency declaration and has gotten 11 more since.

Information on the number of complaints filed in Milwaukee or whether anyone had filed a complaint against El Rey are not yet available.

According to a statement on the Wisconsin Department of Agriculture, Trade, and Consumer Protection website, during a public health emergency, state law prohibits ”wholesale and retail sellers from increasing prices of consumer goods and services by more than 15%.”

That threshold is determined by the highest price within the market area during the 60-day period before the emergency was declared.

Consumers can report possible cases of price gouging or scams related to COVID-19 by contacting the department’s consumer protection hotline at DATCPHotline@wisconsin.gov, calling (800) 422-7128 or by filing an online complaint.

Peter Skopec, director of the Madison-based consumer advocacy group, WISPIRG, said despite the measures in place in Wisconsin , that doesn’t mean prices on certain items won’t be higher than normal.

“Not all price increases are price gouging,” he said. “Sometimes retailers have to increase prices in unusual situations like this, for example when they have to pay more for the goods themselves or shipping becomes more difficult.”

Still, he added, “This is a challenging time for many people, and unfortunately, there are some individuals and companies out there who want to take advantage of that fear and uncertainty.”

The Better Business Bureau offers these tips for consumers and businesses.