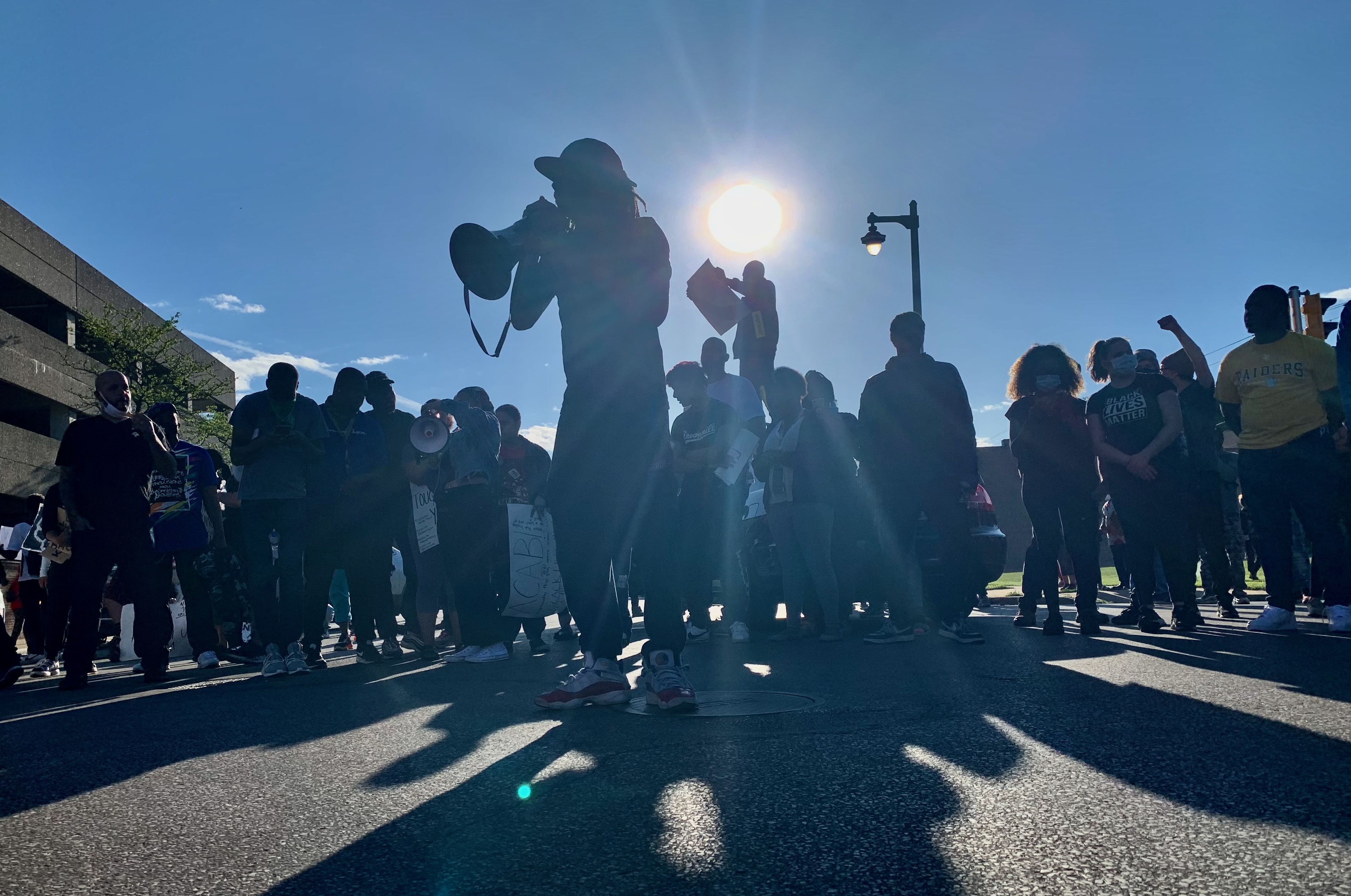 The protests that have taken place throughout the city have led to conversations about racial health inequities and what to do about them. (Photo by Wes Tank)

Some community organizers have expressed outrage that their names were included in a letter purportedly signed by 130 African American leaders about damage to Milwaukee businesses during protests.

“The unrelenting pressure from structural and systemic racism is more than any person can be expected to endure,” the first paragraph of the letter, which was published by media outlets such as the Milwaukee Business Journal and NNS, reads. “For a community, the consequences of oppression are corrosive, carcinogenic, and incendiary. The killing of George Floyd was the latest in a centuries long history of our precious lives cut short. Across the nation, people have been pushed over the edge. Protests, public anger, and grief are the smoke, not the spark that led to the recent events.”

Backlash against the letter quickly spread on social media Monday, with some leaders saying they never gave permission for their names to be included on the list.

“I wasn’t part of the process, and I’m not even sure there was a process,” said Markasa Tucker, the director of the African American Roundtable.

Tucker said she first heard about the letter when a staffer, Devin Anderson, alerted her to it. Tucker said she didn’t receive an email asking her to grant permission. She’s asked that her name be removed.

Instead, she said, her organization stands behind a statement issued by Leaders Igniting Transformation, or LIT, a statewide organization led by youths of color. That group has called for elected leaders to dismantle racist practices and to remove all police and policing resources, among other demands.

Elmer Moore Jr., a community leader, was part of the group that created the letter. He said the group initially started in response to COVID-19 and aimed to bring resources to the African American communities that have been disproportionally affected.

After the death of Floyd and the start of the protests, some group members decided to write the letter to present a collective response. The letter was emailed Sunday, and the individuals listed had until 5 p.m. to opt out before it was sent to local media.

“It was not meant to cause offense,” Moore said. “We’re working to secure the same results as the protest, that is, the dismantling of structural and institutional racism.”

A rift in leadership styles

Jeff Roman, a community organizer, said some of the individuals listed in the letter began working together in March as an informal group of “leaders in the air” and “leaders on the ground” to provide COVID-19 resources to black communities. (Roman is the project manager for News414, a service journalism collaboration between NNS and two other nonprofit newsrooms, Wisconsin Watch and Outlier Media, that connects residents to news and resources through text messaging.)

Roman said the leaders in the air have access to funding and resources, while those on the ground work directly with those impacted. He noted there is often a disconnect between the two groups.

“The issue is that those in the air don’t connect well with those on the ground and they overstep,” Roman said, adding that this is what happened with the letter.

Many objected to a portion of the last paragraph, which says: “We must strongly condemn the actions of those coopting the protests with destruction and violence. Their actions do not represent our demand for equity and opportunity. We are fighting for our lives, our health, and our prosperity because we matter. You matter. “

Shavonda Sisson, the director of programming at Public Allies, also asked that her name be removed because she said the letter undermined her work and does not align with her beliefs.

“I’m not going to condemn oppressed people and the way they resist oppression,” Sisson said. “People are fighting for their lives, and I’m not going to put buildings before that.”

When she heard about the letter, Sisson made a Facebook post explaining she didn’t agree with some of the content. She said it was important that the young people she works with know she’s an ally and a person they can turn to when in trouble.

Carl Wesley, the president and CEO of the Center for Self-Sufficiency, agreed to have his name remain on the letter. He said the backlash occurred because the letter was sent out on a Sunday afternoon and required people to opt out rather than opt in.

“I agree with the letter,” Wesley said. “It did a good job to capture the issues that were existing long before today.”

While the letter was criticized by some for not having a call to action, Wesley said he felt it was important to quickly put something out to show support and that a more detailed plan is coming.

“We believe in the cause, but we don’t want the focus to go on the looting and rioting,” he said.

Moore said the plan is to republish the letter, with an updated list of signatures. An apology has been issued, he said.

Tucker said moving forward, leaders who work with grassroot organizations need to be included in the process and conversation.

As one of the on-the-ground workers, Roman is helping the group create a strategy.

“Those plans of action come from” leaders “on the ground because they know what the issues are, and they’re better positioned to articulate what those demands are,” he said.

The unrelenting pressure from structural and systemic racism is more than any person can be expected to endure. For a community, the consequences of oppression are corrosive, carcinogenic, and incendiary. The killing of George Floyd was the latest in a centuries long history of our precious lives cut short. Across the nation, people have been pushed over the edge. Protests, public anger, and grief are the smoke, not the spark that led to the recent events.

Heinous and ongoing violence committed against our fathers and mothers, sons and daughters in the form of inadequate access to decent education, healthcare, work, and housing conflicts with our fundamental sense of humanity. This ethical contradiction cannot stand, and we will no longer endure it.

Just days ago, we launched “You Matter” as an affirmation to our community of their individual and collective value. You are important, you are loved, you matter. While this campaign was launched in response to the COVID-19 pandemic, it’s a message that transcends this virus.

As leaders of organizations that serve our communities, we are committed to attacking racism at the systems level. We’re prepared to do this both individually and collectively to ensure our loved ones the basic, inalienable rights, and protections they deserve. “You Matter” is just the start.

We must strongly condemn the actions of those coopting the protests with destruction and violence. Their actions do not represent our demand for equity and opportunity. We are fighting for our lives, our health, and our prosperity because we matter. You matter.