You are here: Home / Community Voices / OPINION: Milwaukee has a long, powerful history of black and brown protest
Share this... 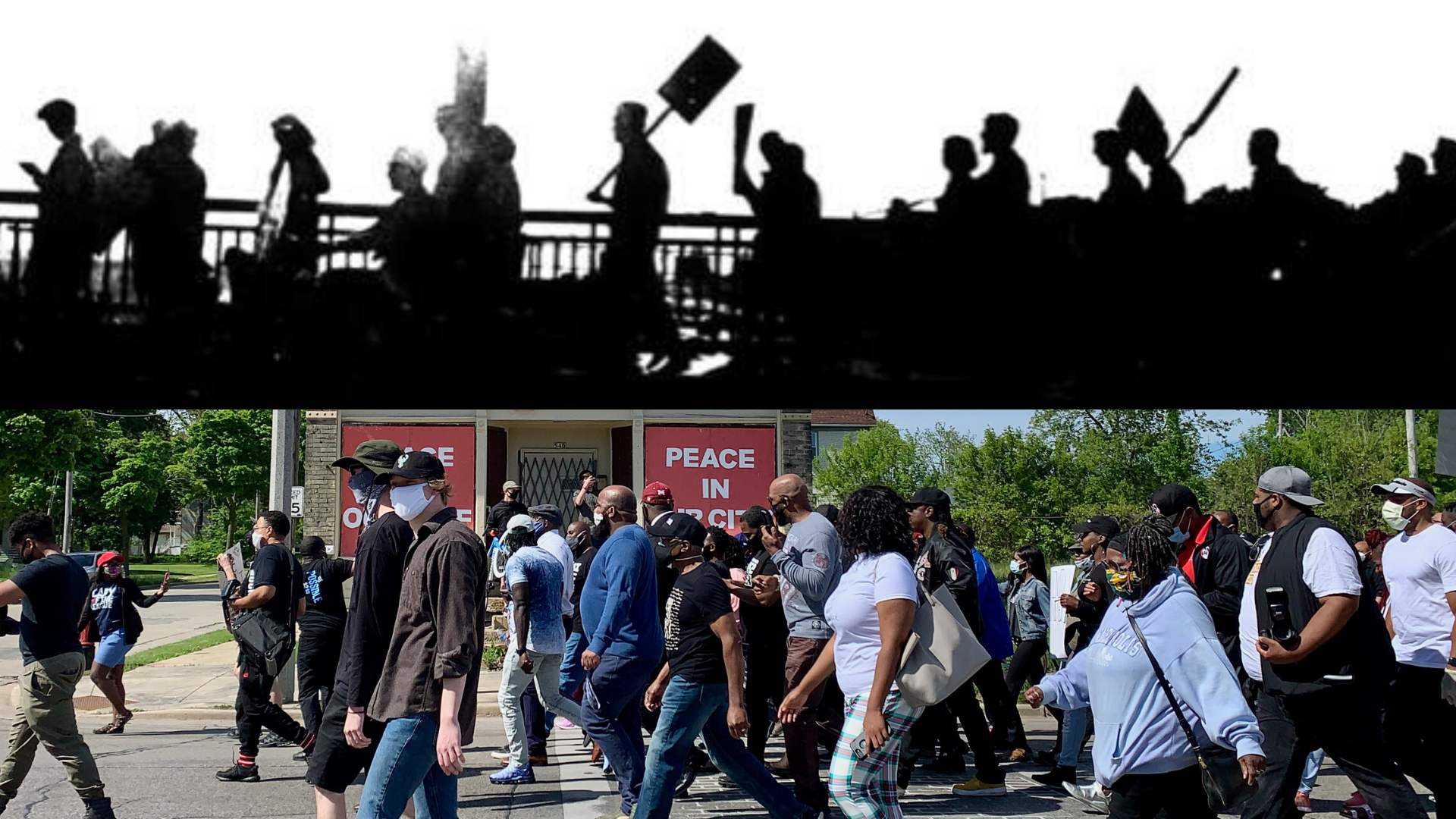 Protesters (above) during the open housing marches cross the 16th St. Viaduct as pictured in the Sept. 9, 1967, Milwaukee Star newspaper and (below) a group marches on North Avenue on May 31, 2020. (Photo by Allison Dikanovic)

Antonio Ramirez is an assistant professor of history and political science at Elgin Community College in Illinois.

Black, brown and white Milwaukeeans have taken to the streets to demand justice for George Floyd and all victims of police brutality. In Milwaukee and across the nation, protests have been met with police violence.

Of course, this is not the first time Milwaukee police have tried to crush calls for accountability and justice.

In the late 1960s and early 1970s, a multiracial coalition in Milwaukee came together to fight for the rights of black and brown workers, mothers receiving welfare and victims of police brutality. And Milwaukee police and the Wisconsin state legislature used violent methods to try to stop them.

Though they were vilified in their day, today Milwaukee celebrates black participants in the city’s 1960s civil rights movement and white leaders like Father James Groppi. The young people of the NAACP Youth Council and Commandos that marched for more than 200 days to demand open housing are, rightly so, now considered heroes.

Fewer Milwaukeeans know that after the open housing marches ended, black and brown activists, along with Groppi, spent years demanding jobs for people of color, for welfare rights and for an end to police brutality.

In July 1968, only a few months after the open housing marches ended, Father Groppi and members of the NAACP Youth Council began picketing Allen-Bradley to urge the company to hire more black workers. At the time, almost all of the 7,500-person workforce was white. By August, the campaign was heating up. Groppi said he and his supporters would end employment discrimination at Allen-Bradley “even if we have to burn it down.” A candidate for Milwaukee County sheriff called for criminal charges against Groppi and said he “agreed 100%” that, if protests got out of hand, law enforcement should shoot to kill.

Residents of Milwaukee’s near South Side Latina/o neighborhood stepped up to join the struggle. During the previous decade, they had criticized the city and Allen-Bradley for razing Latinx-owned homes and replacing them with employee parking lots and an interstate freeway, squeezing the Latina/o community into a smaller area and dilapidated housing.

That fall, Latinx activists including Roberto Hernandez (namesake of today’s UW-Milwaukee’s Latino student center) announced that Milwaukee Latinxs and African Americans had formed an alliance. The coalition would call for Allen-Bradley to hire blacks and Latina/os.

Working together, black and brown activists won. Allen-Bradley was forced to diversify its workforce.

The marchers entered the Capitol chanting, “Power to the People!” Demonstrators found the doors to the Assembly chamber locked, so members of the Brown Berets and Commandos broke them open. A thousand people flooded onto the legislative floor. Terrified legislators adjourned the session and fled.

Marchers draped streamers around the chambers. Students smoked cigarettes and strummed guitars in legislators’ chairs. Mothers fed their children sandwiches and led them around the Assembly floor. Chicano activists with berets and khaki uniforms chatted in Spanish. Behind the Assembly speaker’s stand, someone placed a sign against the breast of a stuffed bald eagle that said, “We May Be on Welfare, But We’re Something.”

Groppi stepped up to address the crowd, saying, “This place looks like a house in the middle of the black or Chicano communities – a little bit crowded!” Speaker after speaker took the podium and explained the hardships that welfare cuts would bring. “I can’t get enough money to live,” said Clementina Castro, who explained that she and her children were destitute. She finished by shouting, “Viva la Raza!”

National Guardsmen arrived and the protest ended peacefully, but elected officials wanted revenge. They ordered Groppi to be taken into custody without a trial. It was the first time the Legislature had ordered someone’s arrest.

The move was sponsored by young legislator James Sensenbrenner, who, as a congressman 40 years later, would inadvertently spark a national immigrant rights movement by proposing a harsh anti-immigrant bill.

Protesters had also chased young legislator Tommy Thompson out of the chamber. Thompson went on to be elected Wisconsin governor in 1987. As governor, he implemented radical reductions in welfare benefits that became a model for the nation. He later traced his political formation to the events of 1969.

After Groppi was arrested, hundreds of protesters assembled at the Capitol. Law enforcement instructed the marchers to disperse. They refused. Police prodded marchers with clubs. Some started insulting police and throwing objects, and police moved in.

When approached by police, a news photographer identified himself as press, but was struck in the face with a riot stick, smashing three of his front teeth. A Milwaukee Journal reporter was jabbed with a club. Police clubbed a Catholic priest in the head. Twenty people were arrested, and dozens were injured. At the end of the melee, blood stained the capitol steps. The next day, the priest’s bloodied face was on the front page of The Milwaukee Journal.

The Milwaukee welfare rights movement continued in the following years, even producing a remarkable book that documented the movement’s multiracial voices called, Welfare Mothers Speak Out: We Ain’t Gonna Shuffle Anymore. “The Milwaukee County Zoo feed the monkeys on 33 cents a meal, but Milwaukee County gives the monkeys on welfare only 16 cents a meal,” wrote Betty Niedzwiecki, a welfare recipient and activist. “That’s how they think of us: we’re not human beings, we’re just animals.”

The movement hit its peak in 1970 when, on a bitterly cold January afternoon, 500 people marched in downtown Milwaukee to protest the cancellation of winter clothing grants to welfare recipients. A tussle between activists and a police officer ended with the officer laying strewn with broken glass in the threshold of T.A. Chapman’s, one of Milwaukee’s largest downtown department stores. Ernesto Chacon and Jose Puente, young Latinos, and Ruth Pollard, an eight-month-pregnant African American woman, lay on top of him. All three were charged with assaulting a police officer. Pollard was sentenced to 90 days in jail and Chacon and Puente faced six months.

In response, Milwaukee Latinxs created the “Free Los Dos de la Raza Committee” and organized a march in support of Chacon and Puente. In March 1971, hundreds of people showed up to march from Milwaukee’s South Side to downtown. From the beginning, the march was tense, and several marchers were arrested, including Jesus Salas, who years later became a UW Regent.

At the downtown rally, marchers spoke against the racism of the Milwaukee Police Department and drew connections between the struggles of Milwaukee Latinxs and those in Puerto Rico, the U.S. Southwest, and throughout Latin America. When demonstrators burned a coffin with “JUSTICE” written on the side, agitated police moved in and stomped out the fire. After the event concluded and marchers walked back to the South Side, the police presence began to grow.

Milwaukee’s Latinx newspaper, La Guardia, reported that as marchers reached the South Side, police jeered them with racist insults. “When the crowd reached the dark streets of the 5th St. area the police began pulling innocent people from the crowd and beating them with clubs,” said La Guardia. “The police would jump in from the vehicles and randomly arrest and beat people.”

After most marchers had fled, the police armed themselves with shotguns and raided the offices of nearby Latina/o organizations. “The police entered and began to search the offices of the University of Wisconsin-Milwaukee Spanish Speaking Outreach Institute,” wrote La Guardia. “The Assistant Director of the program asked the police if they had a right to enter without a search warrant. The police officer then pointed a gun at his chest, and he was told to mind his own business.”

Police arrested 18 marchers and “left three people lying unconscious in the streets bleeding from their heads. There were over 30 police cars, paddy wagons, motorcycles and trucks in a short two block area on 5th and National,” wrote La Guardia.

This time, the police violence caught the attention of Wisconsin Gov. Patrick Lucey. He appointed a statewide task force, which scheduled public hearings at Milwaukee Latina/o organizations and the Milwaukee Welfare Rights Organization. Lucey even toured Latinx Milwaukee himself.

In July 1971, Lucey pardoned Chacon and Puente. The task force’s report outlined how the Latinx community in Wisconsin was ignored, silenced, and unrecognized by state and local government. They found “a citizenry divorced and ignored by their institutions,” and made lengthy recommendations that incorporated community input in the areas of education, health, social services, housing, labor, police-community relations, recreation and representation in government. “Struggling to have their voices heard,” opined the report, these community members feel, “with much justification – that they are neglected.”

Sadly, those words still describe black and brown communities in Milwaukee today. But we should be inspired by the brave marchers of the past. Despite police batons and racist threats, the movement of the 1960s and 70s won significant victories. That should give today’s marchers hope.

Today’s marchers are also giving voice to those brutalized by police and victimized by neglect. Protesters this week—like those 50 years ago—have confronted violence and fear to do the dangerous but necessary work of improving Milwaukee and our democracy.