You are here: Home / Home / Carousel / Five high school graduates who will give you inspiration
Share this... 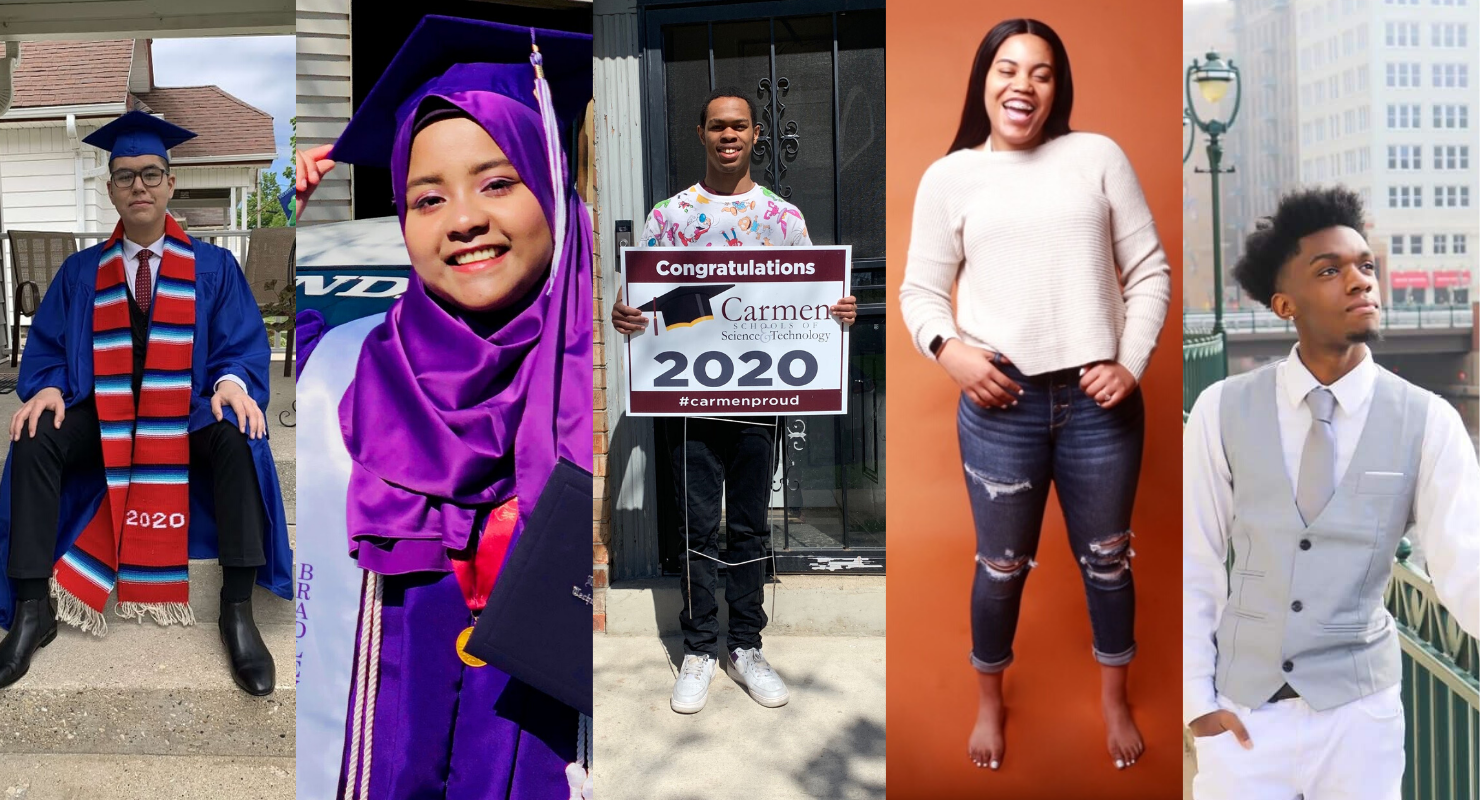 These five young people exhibit just some of the brilliance of the next generation. They’re all high achievers, who are committed to coming back and giving back to the Milwaukee community in some way after going to college.

Many of these young people would have been labeled “troubled” or written off just a few years ago. Now they are valedictorians, community builders and inspirations to everyone around them.

They serve as are a reminder that no young person deserves to be given up on or defined by a moment in time. Like the rest of us, they are on a lifelong journey.

‘I proved what I was always capable of’ 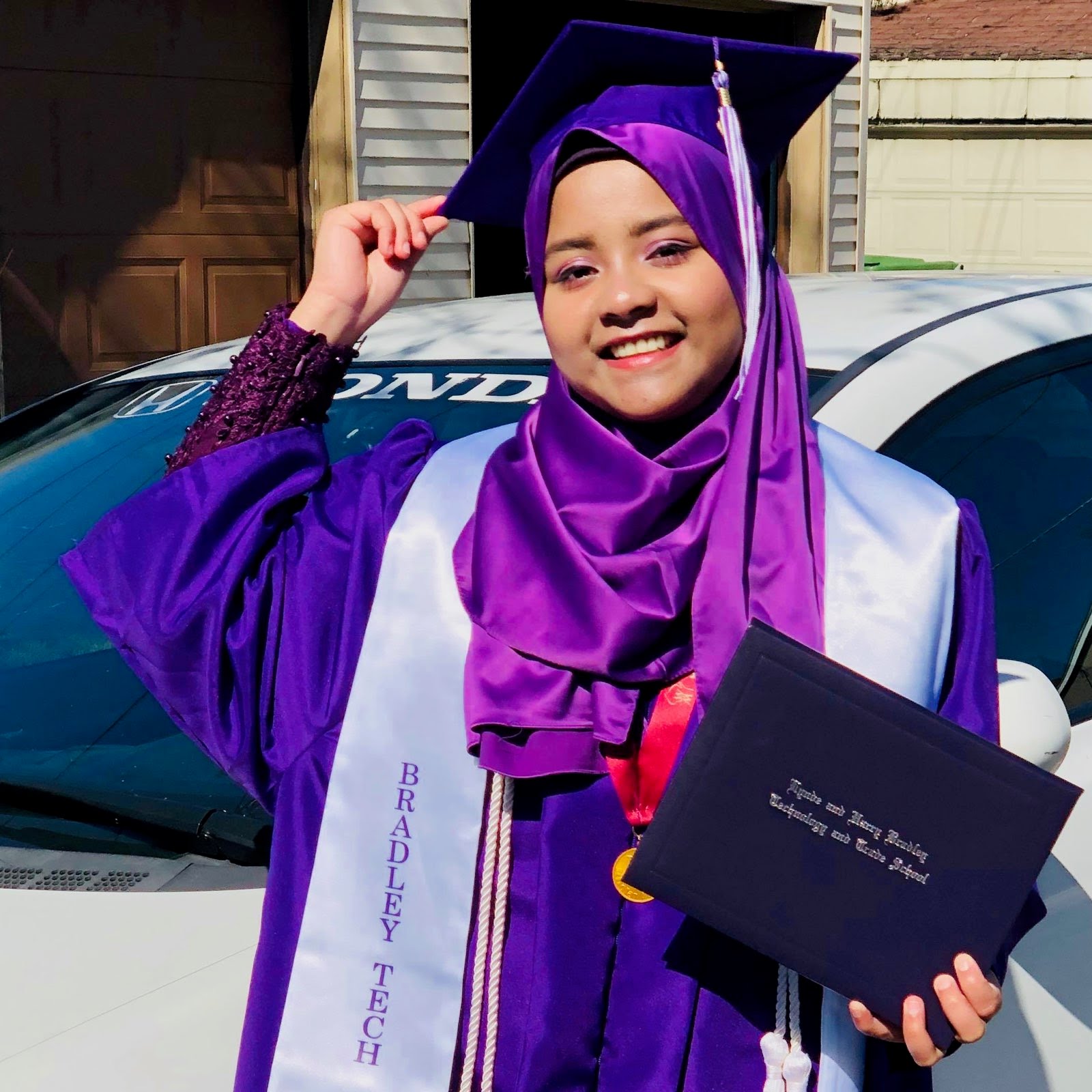 Before COVID-19 hit Milwaukee and schools transitioned to online learning, Sharifah “Bibi” Nur Muhamad was looking forward to speaking as a valedictorian at Bradley Tech High School. It was supposed to be the culmination of an educational journey that spanned thousands of miles.

Born in Myanmar, she moved with her family to Malaysia when she was young. As a Rohingya refugee, she found it difficult to obtain the education she wanted.

Muhamad said life in Malaysia was difficult, especially because she is a Muslim woman.

“I was running all the time, I barely slept,” she said. “People were constantly saying you couldn’t do this or that. As Rohingya we never had the right to own anything.”

But after her family moved to Milwaukee, she noticed improvements in her and her family’s well-being. Not only had she re-enrolled in school, but she and her family were connected with resources like mental health services, which she says helped her settle in and feel comfortable in her new home.

At school, Muhamad began to set herself apart. Knowing the value of an education from being denied it earlier in her life, she rose all the way to becoming valedictorian at Bradley Tech.

“I was told that I shouldn’t gain knowledge because I couldn’t,” she recalled. “But in the end, I proved what I was always capable of.”

This fall, Muhamad will attend UW-Parkside on scholarship and will double major in computer science and math. She wants to get a job related to her majors – and also to give back to her community.

“As a Rohingya woman refugee, I will never ignore prejudice, even in my own culture,” she said.

“I don’t let negativity settle in my head and shake me. I have dreams and goals, and I will achieve them.” 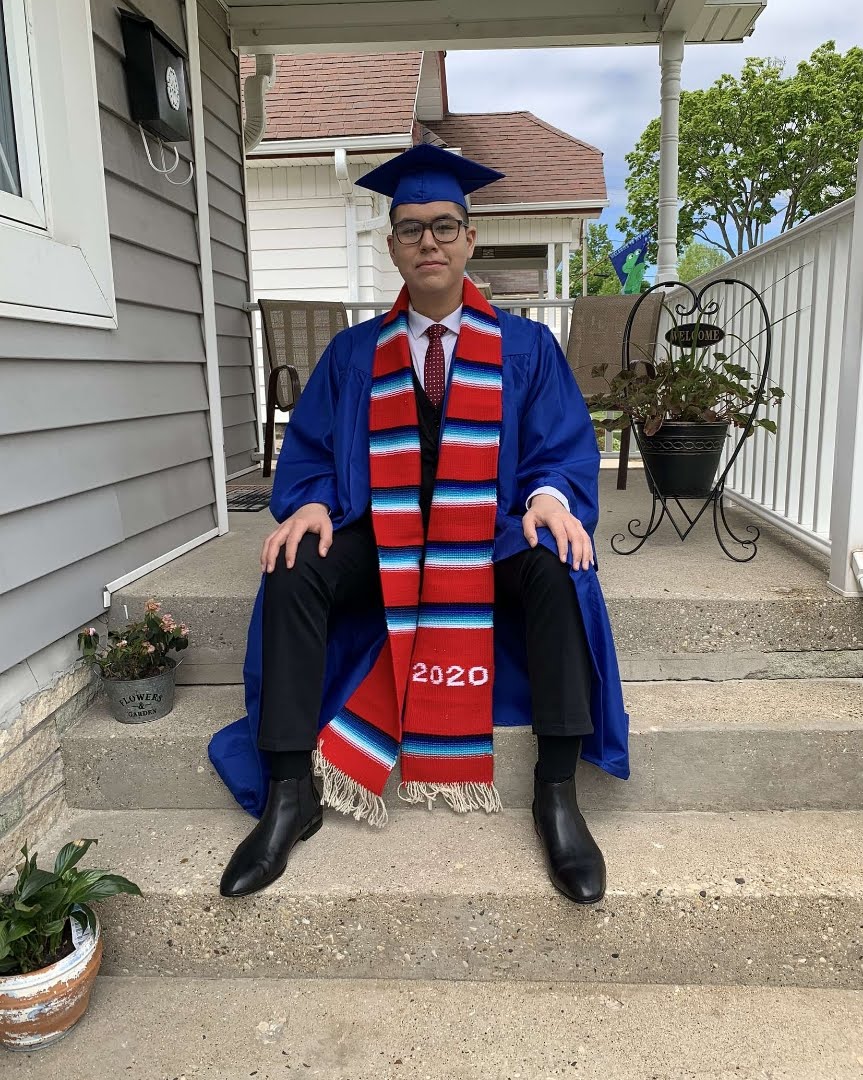 Brayan Aires’ life started over again when he was diagnosed with Type 2 diabetes on his 15th birthday.

“The ironic thing is my mom was on her way to buy me a birthday cake,” Aires said. “If I’d have eaten that cake, the doctor said I would’ve gone into diabetic shock.”

The diagnosis came during a difficult freshman year for Aires. He had failed four out of 14 classes that year, and “barely passed” the rest of them. He was bullied for his weight and battled depressed.

Soon after his diagnosis, Aires’ mother was bedridden for six months after having a cyst removed. Aires switched to online school and stayed at home to take care of her. His blood sugar spiked because of the stress of caring for his mother while also in school, so he quit online school without receiving any credit.

Though he had every reason to give up, Aires used this time to make the lifestyle changes he wanted for himself. He cut out soda and juice and went on a strict diet and exercise regimen. After a year and a half, Aires went from taking four insulin shots and 13 pills a day to nothing.

After his mother recovered from surgery, Aires re-enrolled in El Puente High School. In his first semester there he earned a 3.2 GPA, and by the end of the year was earning college credit. He also earned a 4.0 in a college-level course he took through MATC.

“That proved college was for me,” he said.

After taking more classes for college credit his senior year at El Puente, Aires graduated with 11 college credits, offers from 21 colleges and over a $1 million in scholarship offers. The first in his family to go to college, Aires will attend Carroll University in the fall and major in psychology to become a therapist.

“Mental health is something I take seriously. It’s personal for me,” Aires said.

Aires also sees a need for mental health professionals with his background in his community. He plans to return to give back to his neighbors once he’s certified as a therapist.

“There aren’t a lot of Spanish-speaking mental health professionals in Milwaukee, and I want to come back to that community with new skills. That community is very important to me, especially the Latino community.”

‘I ended up seeing the opportunity’ 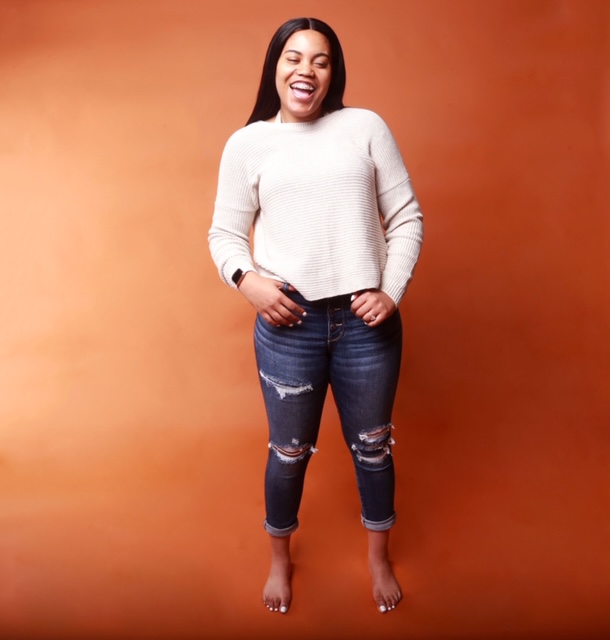 On paper, Mya Goines’ first year and a half of high school was going well. She attended a top private school, was getting good grades and was excelling in extracurriculars.

But, as she now realizes, she was trying to do everything herself. When she transferred to Washington High School in the middle of her sophomore year, she realized she had been missing a community to learn and grow from.

“I regretted the switch initially, but I ended up seeing the opportunity at public school,” Goines said. “I was surrounded with kids who understand my struggle, and that made me comfortable.”

Goines said this peer support made her more open about engaging with other people and growing with them. She said she no longer was fearful of her classmates or in competition with them.

“I had support. I felt I could take on whatever, whenever,” she said.

Goines also credits the adults at Washington who helped guide her through a rough junior year in which she saw her grades slipping and her faith in herself being tested.

“It was the hardest year of my life. I fell off,” Goines said. “I had everything intact, my grades were good, and my friendships and family relations were strong. Suddenly I was seemingly losing it all.”

Luckily, she found another ally in Ajeanette Gordon. Gordon worked with Violence Free Zone, a community-based youth violence prevention and reduction program that offers youth mentoring at several schools across Milwaukee. Goines said Gordon got her through this time by encouraging her to focus on grades and allowing her a safe space to express her emotions.

“She could read me like a book,” Goines said. “Which was good, because I really needed someone on my side at that time.”

Thanks to her friendships and mentors like Gordon, Goines ended up finishing third in her class, despite her grades dropping during junior year. She’ll be attending Kentucky State and majoring in physical education before going on to a career in physical therapy or athletic training.

Looking back, Goines said she would be nowhere without the community she found at Washington. Her advice for other young people? Find and maintain a community you can rely on.

“Surround yourself with people who will let you be yourself, let out all your emotions,” she said. You never know how much you’ll need it or who you might help.”

‘All the hard work came together’

Ever since arriving on Carmen Northwest’s campus as a freshman, Dameatrice Pierce looked for ways to demonstrate his commitment to himself and his community. He participated in dancing, performed community service through the school and lead advisory circles, where he and his peers would help each other with their problems in school or life in general.

“The advisory circles were my favorite part,” Pierce said. “I’m a middle child, but I’ve always felt and acted like the big brother.”

As the years went on, Pierce racked up over 70 hours of community service, serving in a variety of roles with Teach for America, volunteering through Carmen and providing administrative help for his teachers. This was on top of taking AP classes, working on weekends, and participating in sports for most of each school year.

Carmen, in honor of his hard work and determination, presented him with the school’s Nelson Mandela Award. The award is given to one Carmen graduating senior each year who goes above and beyond expectation in terms of academics and community service.

“Senior year and winning the Nelson Mandela award was the icing on the cake,” Pierce said. “All the hard work came together.”

“Joining the Guard for me is not about shooting people or going to war, it’s about becoming a young adult.” Pierce said. “It’s about job opportunities and a stable future.”

Whatever happens in the future, Pierce said he is ready for anything because he knows how to forge his own path.

“It’s not only about being a leader, but it’s also about following a path to success that is right for you. Don’t worry about what other people think.” 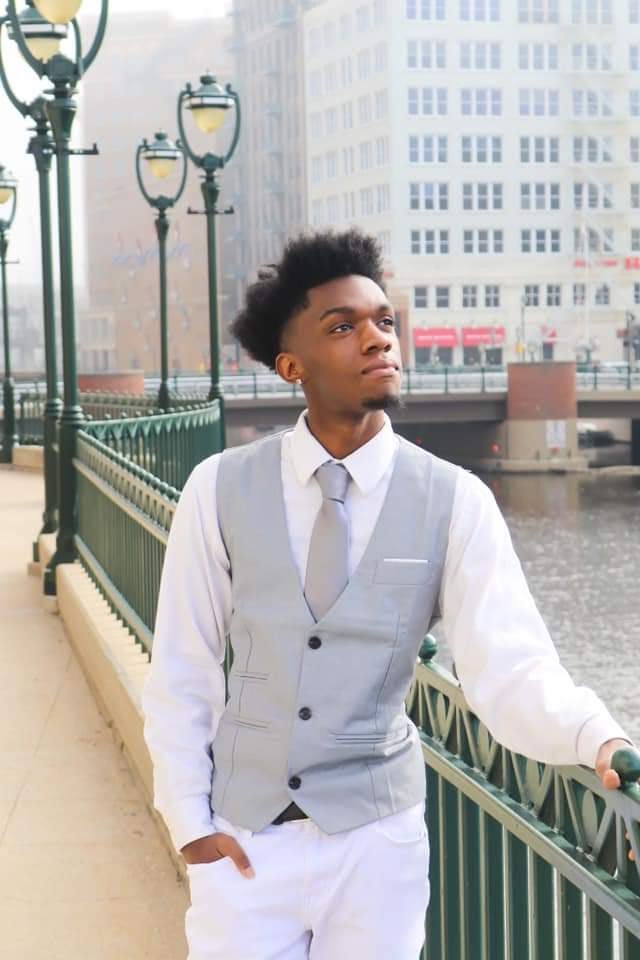 When Montaye Hartz transferred to Messmer High School during his sophomore year, he had already seemingly seen it all.

“I experienced a lot of challenges,” Hartz remembered. “Absent father, witnessed verbal and physical abuse, gun violence, you name it.”

As he looked around, he noticed that people around him maybe had a high school diploma, but rarely did they have college experience.

“It was then that I knew if I wanted more from life than I had, I needed to get that college degree,” he said.

To do this, he dove into schoolwork and extracurriculars. He became an honors student, a historian of the National Honors Society chapter at Messmer, a director of his gospel choir, a track athlete, and he completed Marquette University’s Upward Bound program.

However, life threw Hartz another curveball.

Around Thanksgiving 2019, in the middle of his senior year, Hartz’s house burned down. He remembered waking up in the early morning to the fire alarm going off, and his sister and mother screaming to wake up.

“We ran outside hardly grabbing anything,” he said. “I remember looking at the house burn down from outside, out cold in the rain.”

After the fire, Hartz took some time to step back and take the time he needed.” By the spring semester, he was back at it.

“I wanted to return to my priorities,” Hartz said.

His hard work paid off. Though he originally wanted to go out of state, the COVID-19 pandemic and a full-ride offer from UW-Madison convinced him to become a Badger. He plans to major in neuroscience, and eventually return to Milwaukee.

“I’m not leaving Milwaukee,” Hartz said. “I’m going to Madison for school, but I’m going to keep giving back to my home.”

Portraits of success: Showing off Milwaukee’s beautiful, resilient Class of 2020