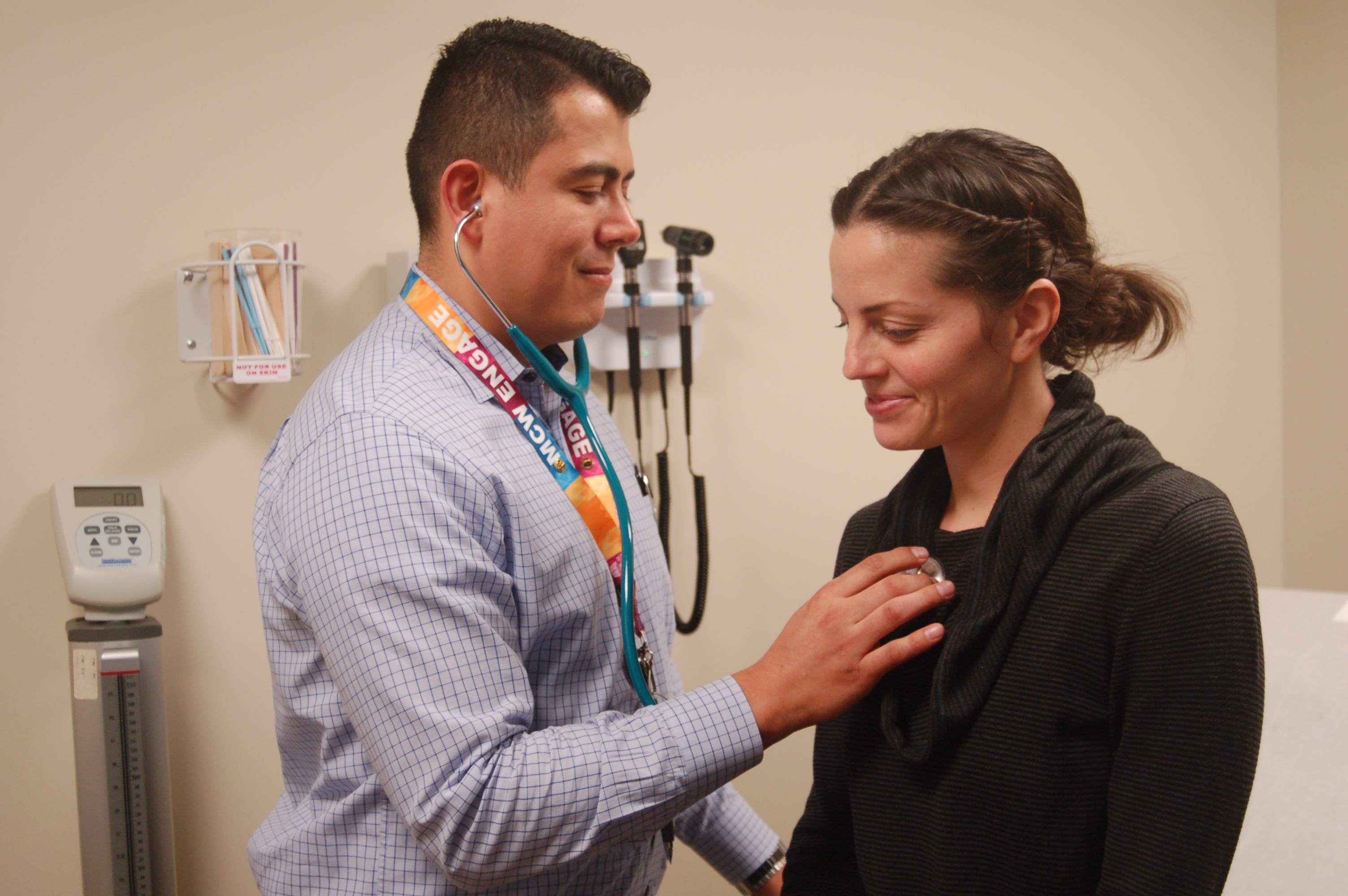 Dr. Jorge Ramallo, who works at the Sixteenth Street Community Health Center, says a language barrier can make it challenging to communicate the complexities of COVID-19. (File photo by Edgar Mendez)

Editor’s note: This story has been updated to clarify the title of Dr. Zeno Franco of the Medical College of Wisconsin.

How do you explain COVID-19 to Spanish-only speakers during a time when many who are proficient in English struggle to fully understand the pandemic?

That’s the question health care providers are trying to answer as coronavirus cases are hitting the Latinx community in Milwaukee harder than other groups.

As of July 6, Hispanics and Latinx residents led Milwaukee County in cases with 4,384. According to the American Community Survey, there were about 41,000 Spanish-speakers in Milwaukee County as of 2016.

Never-ending updates on health guidelines, safety practices and more need to reach the Latinx community more than ever as providers in Milwaukee try to break the language barrier to save lives.

“Sometimes I’ll see documents in the hospital where I’m like ‘you know, I understand it’ but if I gave it to my grandmother, she’s not going to understand that,” Fabiola de Chico, a bilingual patient navigator at Ascension St. Francis Hospital, said.

“It takes a village to get the message across,” de Chico added.

“We do this for English-speaking patients all the time anyway,” Ramallo said. “We try to avoid fancy words they may not know and keep it as simple as possible.”

And Rosa Aguilar, a nurse practitioner at Ascension Angel of Hope clinic on Orchard Street on the South Side, said she tries to break down information about the virus in more practical terms.

“Instead of saying ‘airborne,’ I tell them that ‘it floats in the air.’”

Despite their best efforts, it can still be difficult to get the message across. Ramallo said he has several patients who cannot read and write.

“We need to talk in a way that we don’t make our community feel inferior or … uneducated,” de Chico said. “We need to make them feel comfortable and make sure that they know that we care for them.”

Dr. Zeno Franco, an associate professor of family and community medicine at the  Medical College of Wisconsin, said it’s important for messaging to “meet the assumptions and realities” of people in the Latinx community. For instance, some subsets within the Spanish-speaking community are from entirely different backgrounds and countries. He notes the nuance in words between Puerto Ricans, Mexicans and South Americans.

Franco said there is a divide in public health messaging that needs to be addressed.

“They may not have heard the messaging in the same way because they’re fully Spanish-speaking or they’re not bilingual,” Franco said. “So they’re not being exposed to the same level of public health messaging that an Anglo person would be.”

Getting the word out

To get the message to as many people as possible, Ascension has aired information through Spanish-language radio, including Radio Caliente 97.9 FM, about testing sites and health guidelines.

Franco said we should not assume everyone’s situation is the same, adding that some Latinx people could not completely distance or separate as experts recommended during quarantine because they are “doubled or tripled up” in houses.

Ramallo said the rise in COVID-19 cases could be attributed to culture and socioeconomics. Many Latinx people have jobs that cannot be done from home, such as manual labor. Franco mentioned that it is important to tailor the messages to specifically address being safe at work.

In addition, the particularities of Latinx culture highlight the need for more Latinx providers who can relate to them.

Ramallo said there are “absolutely not” enough Latinx doctors in Milwaukee, following a national trend. Under 4% of doctors identified as Latinx in 2019, despite making up 18.5% of the population.

“We’ve had an issue of underrepresentation of Latinx doctors in the entire county,” Ramallo said. “Our medical schools are not admitting enough Latinx medical students, and we’re not actually creating that pipeline of clinicians that look like their community.”

The importance of representation

“They can relate more to their physician,” Ramallo said. “In a subconscious way, they open up more to them and they’re actually more likely to take their advice.”

Ramallo tries to spend extra time with Spanish-speaking patients for this reason. He also makes sure they have his card before they leave. He said that building that connection with the Latinx community will be important going forward.

Franco said he worries the Latinx community is not taking the virus seriously enough. He said he has seen older couples in grocery stores without masks; he attributes part of this to a lack of public health messaging but says it may also be “bravado.”

“You know, people kind of view the need to be at work, and to kind of be fearless and get things done,” Franco said. “That’s an important part of what it means to work in this country.”

Franco said the Latinx community’s “social culture” can be an issue as well. With its heavy emphasis on family gatherings and togetherness, it can be difficult to convince people to socially distance.

Franco noted a number of other complicating features, including concerns about immigration status and lack of health insurance, can prevent patients from seeking health care. Franco said there is a “primary care desert” for the Latinx community, which also is an issue for the Black community.

“The city itself has a history of segregation of economic disenfranchisement for minority communities,” Franco said. “It’s easy for that to be under the surface most days until something like COVID-19 happens and then you see disproportionate deaths in one of the minority communities almost immediately. All of a sudden, those disparities are laid bare.”