LGBTQ+ voices from within the Black Lives Matter movement

Through marches, murals and speeches, LGBTQ+ members of the Black Lives Matter movement are leading crucial conversations in the community.

The LGBTQ+ community is more than an ally to the Black Lives Matter movement.

In fact, two of the movement’s founders identify as queer.

LGBTQ+ activists across the nation have been painting murals, organizing marches and speaking at rallies. Their message? Issues addressed by BLM affect the LGBTQ+ community, too.

We spoke to some of the activists in Milwaukee’s LGBTQ+ community who are leading the charge. 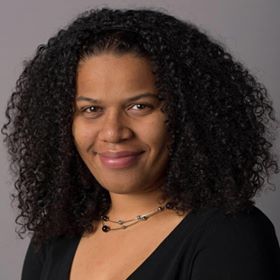 Solana Patterson-Ramos says not everyone has the same level of understanding of queer issues, but there is always room for education. (Photo provided by Patterson-Ramos)

Solana Patterson-Ramos is a community organizer and political campaign coordinator.

Patterson-Ramos worked on the Lena Taylor for Mayor campaign and is involved in the Democratic party in Milwaukee. They are gender queer and pansexual.

Patterson-Ramos said people from all walks of life and every part of the country need to be involved in BLM.

Patterson-Ramos said there are different levels of comfort with inclusivity within the movement. Not everyone has the same level of understanding of queer issues, but there is always room for education.

Patterson-Ramos said claims that the movement was not inclusive came from “the opposition” to try and divide. They said its unhelpful to view the LGBTQ+ community as separate from BLM; all Black people share the struggle.

Patterson-Ramos said if you’re not also fighting for LGBT Black lives, you’re not fully in the movement.

Halo has spoken at, hosted and otherwise been involved in several BLM events, including the Black Women’s Emancipation March last month. 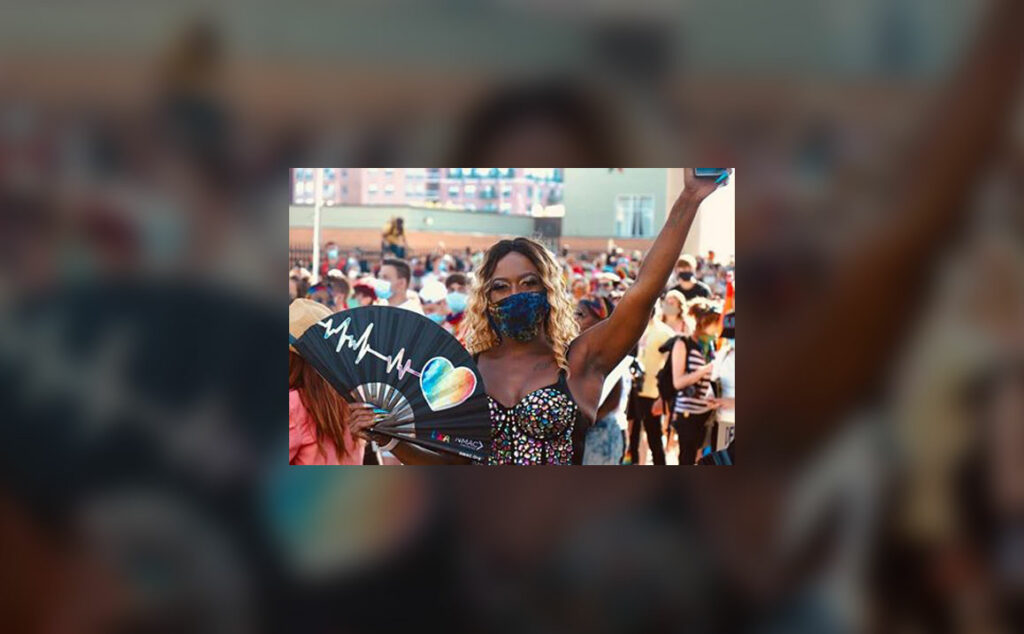 “We need to empower cis and trans Black women to do healing justice work and we need to pay them equally to do it,” trans activist Elle Halo says. (Photo provided by Halo)

“We need to empower cis and trans Black women to do healing justice work and we need to pay them equally to do it,” Halo said.

Halo said she favors abolishing the police and prisons. She questioned how the police could be “protecting” citizens when “there’s absolutely no proactive work being done.”

“They’re only responding in a militarized way to the things that have already happened in our community and the lives that are already gone,” Halo said. “You can’t go shooting up places because people have been shot.”

Halo also questioned how effectively the police use taxpayer money.

Halo said healing justice workers have the tools to help people re-entering society from prison and could pick up the slack for police departments.

“I really believe that Black women effectively act as an individual whole state-of-the-art prison re-entry system and facility every time a Black man gets out of jail anyway,” Halo said.

Halo said she has been using her platform to try to uplift those voices as well as providing support for other trans women through the group Sisters Helping Each other Battle Adversity, or SHEBA. She said it’s a common feeling among trans women that they have to “sell their bodies” and “sell themselves into the system” in order to gain attention for their issues.

“Something I see in my international trans community is people just having to go to such extremes for survival when we’re more than adequate by ourselves,” Halo said. “We don’t all have to start organizations. We can build and change the makeup … of the people and the staff and the boards of organizations that are already servicing our communities.” 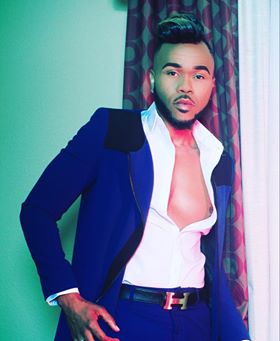 Montell Ross says the LGBTQ+ community “should be one of the first groups standing in support and solidarity for Black Lives Matter.” (Photo provided by Ross)

Pearson performs masculine drag as Montell Ross and is well known in the drag community.

March With Pride began with a Facebook post and quickly snowballed into a 2,500-person march. Along with other allies in the LGBTQ+ community, leaders were able to get the word out and organize the full protest in just a few days.

Pearson said internalized oppression can be damaging to the movement.

“It’s very hard,” Pearson said, “for some Black gay people to stand behind the Black Lives Matter movement when you walk outside your home and you’re being called a lot of derogatory names and harassed and possibly even putting yourself in danger of violence from your own people.”

Pearson was involved in a virtual town hall to have a conversation with community leaders about inclusion and acceptance of the LGBTQ+ community.

“When something happens in our community,” Pearson said, “whether you are trans, gay, bi, bisexual, non-identifying, gender non-conforming: if we notice injustice happening against us, we … need to understand the support that is needed as a community of Black individuals, not just the gay community.”

Pearson referred to the recent killing of a trans man, Tony McDade, by police in Tallahassee. A 2014 National Coalition for Anti-Violence Programs study found that transgender people are seven times more likely to experience physical violence in encounters with the police.

Pearson said BLM has been brought “an entire different level to the nation” as compared to the past. 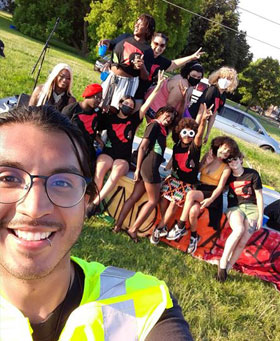 Angel Vega, at the Black Women’s Emancipation March, says he’s often hidden his identity as a gay man, but that he’s put aside those feelings to embrace his whole identity for the movement. (Photo provided by Vega)

Angel Vega was a co-organizer of the March With Pride for Black Lives Matter protest. Vega has experience organizing parades and helped to gather people for the march.

Similarly, Vega is involved with Pueblo MKE, a coalition of “Brown People for Black Lives Matter” made up of Latinx allies to the movement. He is also a teacher.

“There hasn’t been enough attention for the queer and trans community,” Vega said. “Because again, they’re also impacted by this, sometimes even more so than a straight or cis man or woman.”

Vega said he’s often hidden his identity as a gay man, but that he’s put aside those feelings to embrace his whole identity for the movement. He said that he wants to respect his allyship as a Mexican American by remembering his place in the movement and leaving plenty of room for others.

Vega said he views BLM events as an important opportunity to educate the community on anti-blackness. He said having conversations about colorism and other issues is important and everyone needs to combat anti-Black biases.

Vega said he wants an end to institutionalized racism and oppression, which he says are “symptoms of a decaying system, which is capitalism.”

‘So many things that we need to address” 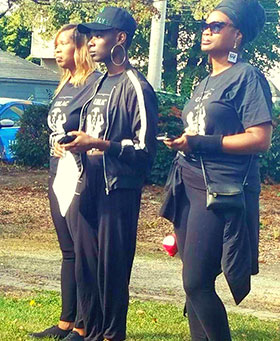 Annia Leonard is a youth organizer with Uplifting Black Liberation and Community Vision, or UBLAC. UBLAC is a coalition led by Black women, trans people and queer people with the goal of Black liberation.

Leonard said she has been actively showing support and solidarity with BLM. She said that she wants the LGBTQ+ community to be vocal about their unity with BLM and that she has challenged people to participate

Leonard said part of the work she does involves examining different aspects of Black lives and identity. She is planning to host workshops and initiatives on “collective understanding and collective unity” about what it is to be Black in America.

Leonard expressed the importance of protesters taking care of themselves, and that she has been contemplating “more calculated and strategic ways of showing up” to avoid burnout. She mentioned the importance of having a home space where people feel loved and comforted.

“It’s really about having a place outside of everything happening out on the streets,” Leonard said.

“There’s still so many things that we need to address that we can’t put all our energy into reacting to one life or two lives.” Leonard said.

‘The fight isn’t over’ 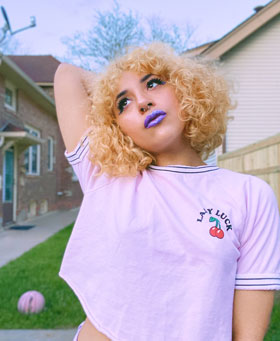 Jaqueline Tavares seeks to elevate the voices of Black women, trans women and LGBTQ+ women through her art. (Photo provided by Tavares)

Jaqueline Tavares is an artist and photographer. She is a Mexican American ally to the movement, and she wants to respect the boundaries of allyship.

“I don’t want to overstep …” Tavares said. “I say this a lot, but I think it’s important that people know that I’m here to amplify other people’s voices in the movement.”

Tavares especially wants to elevate the voices of Black women, trans women and LGBTQ+ women through her art. As a bisexual herself, she wants to stop them from being “erased or overlooked.”

Tavares helped put up murals around the city. She said in terms of promoting the movement, art can be an easier avenue to learning more than reading and research.

“It’s something that people can see,” Tavares said. “It’s right in their faces and it’s like ‘Oh, hey this is going on. These people are getting murdered’ or ‘These are the people that have been fighting for others’ rights.’ That’s one way art can be helpful.”

The most recent mural was put up on Locust and Holton. The mural featured black female and LGBTQ+ activists, such as Marsha P. Johnson, a Black trans woman who started the Stonewall Riots.

Tavares said members of the LGBTQ+ community reached out to voice concern about march leader Frank Sensabaugh, who goes by Frank Nitty, being on the mural after it was found he used anti-LGBTQ+ language in the past. Nitty has since apologized for the comments.

Tavares said that while progress has been made, there’s still a long way to go for herself and for the movement.