You are here: Home / Community Voices / OPINION: ‘They are my ancestors’: My 17-year journey to becoming a Brown Beret
Share this... 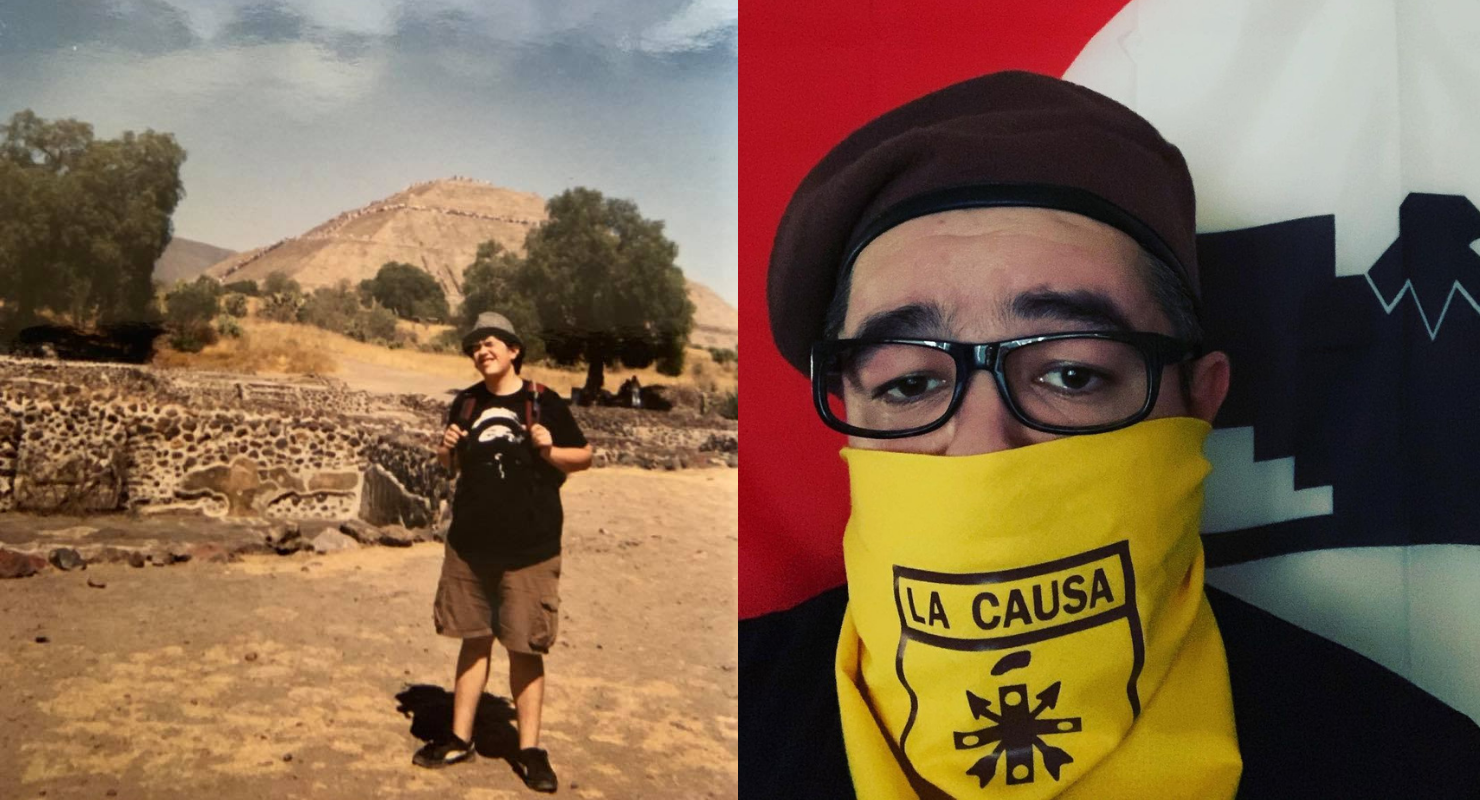 Juan Miguel Martinez is a writer, Brown Beret and union organizer from Milwaukee.

September 16, 2003. I get off the plane in Bajio International Airport, some 13 miles outside of León, Guanajuato.

I will be 19 in three days and am still in a Tom Waits phase. I am already sweaty because the cocked pork pie hat and sport coat I’m wearing are made from heavy wool, and I’ve just landed in desert heat with only a slight valley breeze.

My plan is to enroll in the Filosofía y Letras department at the University of Guanajuato and write short stories and translate them myself. It is a lofty goal because I have no college credits to my name, but if that fails, I can always travel and scribble everything down and make sense of it later.

Mi abuelo (grandfather) Nacho y mi abuela (grandmother) Estela are waiting for me at the gate. I sneak directly beside them, pretending to look for myself as well. I lean over and say to mi abuelo, “Excuse me sir, have you seen my grandpa?” “HEY!” he shouts and gives me a bear hug, followed by my grandma.

“Wow! I was expecting a fat butterball to be rolling toward us. I guess that’s why I didn’t recognize you!” she says. “I’ve been working in a meat packing plant the last year, so I dropped 73 pounds,” I explain.

We drive into town and my new temporary home in my grandparents’ house, which is situated a mile from downtown León, GTO in one of the noisiest colonias (neighborhood) in the city — Obrera. It is a split-level house made of concrete with steel doors and barred windows.

Vicente Fox is on TV, giving the Independence Day speech from El Zócalo, the main plaza in Mexico City, a place I would be living in three years later. It would be there that I would discover the writings of Juan Rulfo, the music of Ratos de Porão and the films of Alejandro Jodorowsky.

We sit on the couch, eating orejas, flaky sugar-coated pastries. I sip coffee out of a faded Wisconsin Badgers mug, attained by grandparents on their visits to Milwaukee. Fox closes out his speech with three “VIVA MEXICOS!” On the third one, he cannot contain his jubilation.

I grin and look over at mi abuela. “He really went for it that time,” she says, sipping her coffee. “Thought he was gonna have a heart attack.”

Sometime in mid-2006 — I was “dando el rol” (taking a stroll) with my friend through El Chopo, a tianguis (flea market) in Guerrero, one of the most dangerous neighborhoods in Mexico City.

The airborne pollution was beating down on my sun-damaged tangles as I inspected a CD by Masacre 68, a punk rock band. I was particularly transfixed by the ideology of this band because they named themselves after a terrible event in Mexican history. Roughly 400 unarmed students were holding a protest rally and were gunned down by the Mexican military in La Plaza de Tlatelolco, later named La Plaza de las Tres Culturas.

I showed the CD to my buddy Francisco, nicknamed “El Tio.” “What about these guys?” I asked. He shrugged and mumbled something. His attitude did nothing to deter me because I had been living in Mexico City for eight months and was imbued with a sense of patriotism.

I wasn’t born here, but I was exercising an advantage my parents set me up for early in life — dual citizenship. I had already voted, had a government-issued ID and could enlist in the military if I so desired.

I waved at the old man running the table and held up the CD. “This one . . .  and that one in XL,” I said, pointing at a shirt emblazoned with an image of Pancho Villa, the toughest and most patriotic Mexican revolutionary in history.

El Tio looked at me and grimaced. “Wacatelas,” he said, which was onomatopoeia for a puking sound. To say I was taken aback was an understatement. I had always assumed that everyone in Mexico flew the flag of pride for their country, because it was hardwired in me since birth to do so. My father was always very proud of where he came from and always said “Arriba Zapata” when jovial.

I explained all of this to El Tio, who listened intently and asked, “Do people wear shirts of George Washington in your country?” I replied, ”Sometimes . . .”

“Are they people you want to hang out with all the time?” he responded. All right, I get it. I was proud to have been living in a place I had adopted as my patria (native country), but it wasn’t my home. My home was the North and South Side of Milwaukee, Wisconsin.

May 25, 2020 — I was scrolling through Facebook listlessly, laying on my couch.

Then, I see a Black man screaming for help, with an officer kneeling on his neck. The video goes on for 8 minutes and 43 seconds. Head-shaking denial gives way to anger. I immediately start writing a screed on police brutality, condemning the actions of the officers involved.

I look up “Brown Berets Milwaukee” and decide it is written in my DNA to be one. I had always seen them in photos of the history of uprisings in 1960’s Los Angeles, proud Chicanos in military garb with bright yellow patches that read “LA CAUSA” on their berets. They are a group of Chicano folks who strive to protect La Raza (the people) from police brutality and conserve our history, a militant group that stands up to the constant misrepresentation of who we are while instilling a sense of pride.

When high school students in East Los Angeles walked out of their school in 1968 to protest mistreatment of Chicano students, they were there. When Ruben Salazar was murdered for covering the injustices that plagued the community at the hands of police, they marched and made their presence known.

They are my ancestors, here still, breathing through me like they were 17 years ago when I arrived in León. Like that time, I decide I didn’t belong to Mexican or American culture like I did to the word I identify with most — Chicano.

Four months later, I join a Zoom call with Brown Beret commanders from Texas, California and Milwaukee. After some interview questions, we all raise our fists and I take the Brown Beret oath.

I will always do everything I can do to protect the “Raza de Bronze,” always in solidarity with my Black brothers and sisters.