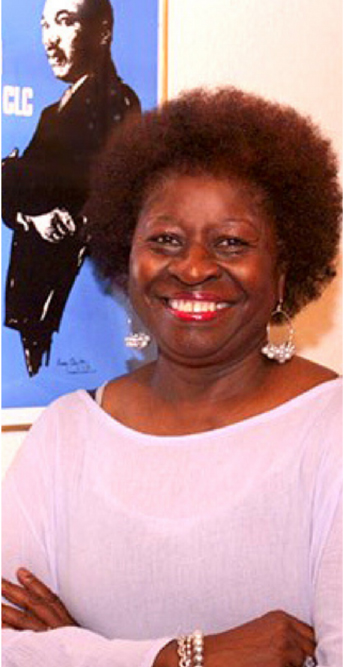 Voting rights advocate Anita Johnson has been selected to receive the 2020 Robert H. Friebert Social Justice Award. The award was established in 2014 by the Jewish Community Relations Council of the Milwaukee Jewish Federation and the family of Robert H. Friebert.

Johnson’s professional and volunteer dedication to voting rights across Milwaukee and Wisconsin, at both policy and individual levels, embodies the spirit of the award.

To recognize her work and the legacy of Robert H. Friebert, the JCRC plans a virtual event — “What are the Foundations of Social Justice?” — on Oct. 15 at noon. Following a ceremony honoring Johnson will be a panel discussion with Johnson and past award recipients, including James H. Hall, Danae Davis, Reggie Jackson, Fran Kaplan, Arno Michaelis, and Pardeep Singh Kaleka.

The selection committee was struck by Johnson’s steadfast commitment to remove barriers to voting, especially in historically disenfranchised communities. She currently works with two prominent, non-partisan organizations, VoteRiders and Souls to the Polls, a faith-based organization. In these and prior roles, her efforts include organizing free rides to the polls, serving on the Wisconsin Election Administration Council, creating large scale voter registration efforts, and crafting messages on when and where to vote, and how to obtain the necessary documentation.

“We were deeply inspired by the sheer amount of efforts Anita has undertaken to make voting more accessible across the state,” said JCRC Director Jenny Tasse. “Her tireless advocacy for voting rights and direct voter support is a model for pursuing justice.”

The award draws from Deuteronomy 16:18: “Tzedek Tzedek Tirdof—Justice, justice you shall pursue.”

“Particularly as we are weeks away from an election where some Americans have already begun to vote, we are thrilled to recognize Anita’s lifelong commitment to ensuring all Wisconsinites have ballot access,” said JCRC Chair Brian Schupper.

Attendees can register to receive a Zoom link at MilwaukeeJewish.org/Friebert or view it live on JCRC’s Facebook page.

Robert H. Friebert (1938-2013) dedicated himself to the pursuit of social justice and the Jewish value of tikkun olam (repairing the world). A graduate of the University of Wisconsin Law School, Friebert was a founding partner of the law firm Friebert, Finerty and St. John S.C. He served as the first public defender for the State of Wisconsin from 1966-1968 and argued four cases in the United States Supreme Court, including one that covered the right of people to vote in primary elections. Friebert was also extremely active in local, state and national Democratic politics in his pursuit of social justice. In addition to his legal and political work, Friebert held significant leadership roles in numerous organizations, boards and commissions, including serving as Chair for the JCRC. For more on Friebert and the award, click here.

About the Jewish Community Relations Council

Founded in 1938, the Jewish Community Relations Council, a program of the Milwaukee Jewish Federation, advocates for the rights and values of Jews individually and collectively, here and abroad. The Council implements a coordinated program of education, action, and advocacy for the Jewish community. Since 1902, the Milwaukee Jewish Federation has been dedicated to building a strong Jewish community. The agency distributed $19.5 million last year to Jewish and non-Jewish organizations locally and around the world.