You are here: Home / Home / Carousel / This MPS charter school is more than quadrupling the number of Wisconsin Black students taking the AP computer science exam
Share this... 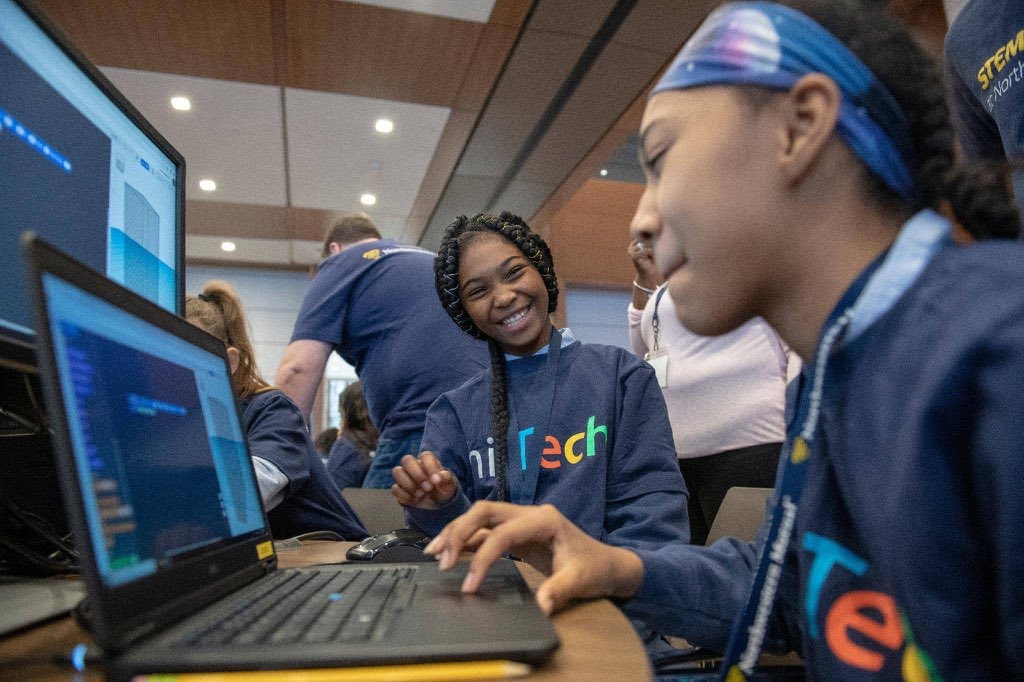 Last year, only 23 Black students took the exam in the entire state.

Advanced Placement, or AP, courses are year-long rigorous high school classes culminating in an end-of-year exam in May. If students do well in these courses, they can get college credit before setting foot in college.

Last year, the percentage of Black students taking the AP Computer Science Principles exam in Wisconsin lagged behind neighboring states. In Wisconsin, only about 2.2% of students who took the exam were Black, according to AP exam data.

A background in computer science can lead to high-paying jobs in the near future, as computer system design is projected to be one of the fastest growing industries over the next 10 years, according to the Bureau of Labor Statistics.

“It’s so essential to learn these skills right now,” Taylor said. “Even if not one student goes into computer science as a career or college degree, they’ll be better at whatever they want to do.”

Lita Mallett (center) and some of the 102 Milwaukee Excellence sophomores set to take the AP computer science exam in May. (Photo provided by Lita Mallett)

‘I want them to have choices’

Giving her students options in life is personal for Milwaukee Excellence’s principal, Lita Mallett. Mallett grew up in Milwaukee before getting her bachelor’s degree in biomedical engineering at the University of Southern California.

Despite being a top student and scoring high on college admission tests, she recalled how her high school counselor didn’t even notify her that many Ivy League schools required supplemental SAT tests to apply.

“I didn’t get into any Ivy League schools because I wasn’t even aware of everything I needed to apply to them, whereas the white students in my school did get in,” Mallett said. “I don’t want life just happening to our students, I want them to have choices now and for the rest of their lives.”

Mallett also highlighted the importance of Black female role models in the Science, Technology, Engineering, and Math, or STEM, fields.

“It’s really important to have a teacher that looks like me,” she said. “They’ve always been my favorite because they know how to connect with me. I feel more connected to my Blackness.”

McDonald is not necessarily interested in a career in computer science, preferring to become a teacher or psychologist instead.

However, she is already finding ways to use skills she’s learned in the class, starting with the computer game “Sims.”

“The darker skin tones in Sims are blotchy and discolored, with a bluish, greenish undertone,” McDonald said. “People who look like me still can’t really play as themselves, even though Black players have been asking for this to get fixed for years.”

Recently the game came out with a fix for this, but McDonald said she doesn’t notice a change. Before taking this class, she wanted to confirm that this was a problem with how the game is designed, not a problem with her individual computer. Now, she’s getting closer to an answer.

“They said something like ‘We fixed error number 2705,’” McDonald said. “I can’t do it yet, but eventually I want to use what I learn in this class to investigate where that error comes up in the code and learn more about why it’s messing up the darker skin tones.”