You are here: Home / Home / Carousel / ‘I felt like I lost a part of me’: How Camille Mays finds peace after gun violence took her son
Share this... 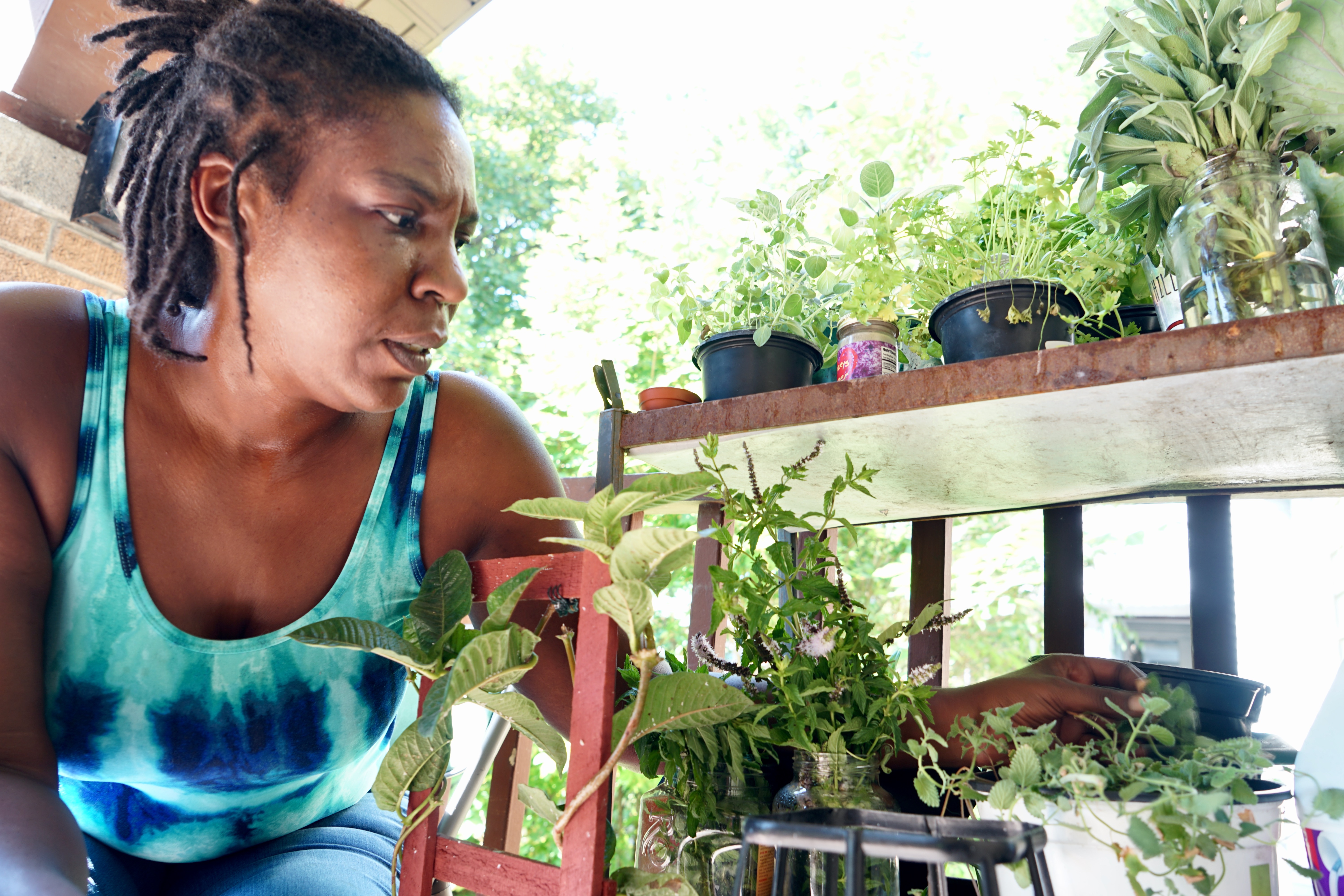 Losing her son to gun violence has forced Camille Mays to identify ways to cope. She now has over 100 houseplants that she tends to regularly. On days when she loses her purpose, the plants are always there, and they fuel her to press on. (Photo by Adam Carr)

For more than four years, Camille Mays has planted peace gardens in Milwaukee for victims of homicide.

The gardens are meant to provide a place for families to visit and pay their respects after the city tears down memorial sites for them. It’s a simple gesture, she said, but one that has brought her close to the families of many victims.

“My heart went out to the families of people, you know?” Mays said. “I just couldn’t imagine what it would be like. And I always tell them, ‘I don’t understand, and I’m sorry. I hope I don’t ever understand.’”

Her son, Darnell Woodard II, called Booka by his family, was killed by two gunmen when they robbed him during a drug deal. Booka, the oldest of her sons, was 19. Mays suddenly had her world turned upside down.

Mays, a 43-year-old Sherman Park resident, always knew that her son was like her: fearless and ready to jump into anything. He laughed at one of his robbers before they killed him. But it wasn’t until he died that she realized how much he had taken after her until friends and neighbors came forward to talk about times that he had helped them.

Mays said Booka did things for his younger brother, like paying his phone bill and checking in on his grades. He was also a mentor in the life of a little boy, one of their neighbors, something Mays never knew about until after Booka died. He was very protective of his family, too. 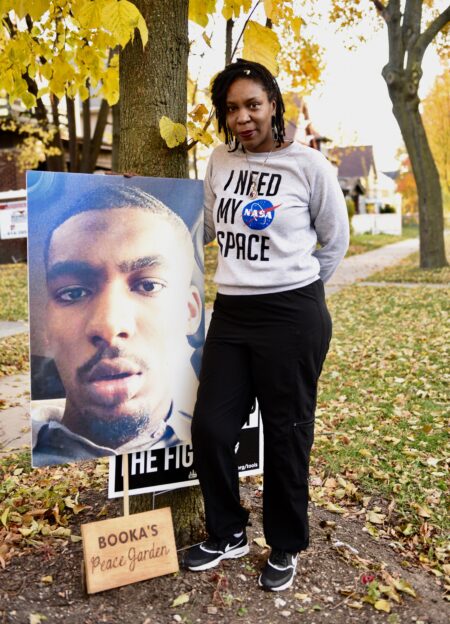 Camille Mays stands in the peace garden she made in memory of her son Booka, who was killed in November 2019. (Photo by Sue Vliet)

“He was like a teddy bear inside,” Mays said. “My Booka didn’t fool with anyone he didn’t know, but if he knew you, his heart was gold.”

In the immediate aftermath of the homicide, Mays was surrounded by family and friends and received much media attention. Things got even harder after the first two weeks.

“Two weeks after is when everything disappears,” Mays said. “When all the support and the food and the people, it disappears. And I never thought about that part of it as I was calling and checking on those people throughout all the years.

“That’s why it meant so much to them, because people drop off,” she said. “They forget or they move on or it’s the next news story or they dismiss one of the stories with drugs or something else.”

Mays said she was thankful for the support she received but realized that other families don’t always have as many people checking in on them. She said every family should be able to get that support.

“It should be more outreach, more people checking in and more people doing stuff after, because we are not OK,” Mays said.

Mays doesn’t mind saying it. She’s not OK. She’s traumatized. She still offers peace gardens but doesn’t go to vigils or gatherings anymore because of how emotionally heavy they are. Even movies and music can be triggering for her, making her relive emotions from the shooting.

‘There’s no textbook for this’

She’s not OK — but she’s learning to live with it.

Slowly, she has begun a long healing process and is willing to talk about it.

First, she had to find somebody to talk to. She’s found that talking helps, but only a few can truly understand. Where therapy has fallen short for her, talking with people who have experienced the same violence has helped her to heal.

“I don’t care how much therapy training you have, how many degrees you have, if you haven’t been through it,” Mays said. “You can give me a textbook explanation, and there’s no textbook for this.”

Mays said she finds strength in other people who have been through it, and that they’ve helped her heal.

She turned to some much-needed peaceful distractions as well. She said she has gotten into coloring and even painting lately. It’s important to have something to take your mind off of negative thoughts and find peace, she said.

Finding peace in the garden

In addition, Mays still gardens. She now has over 100 houseplants that she tends to regularly. On days when she loses her purpose, the plants are always there, and they fuel her to press on.

“It’s just like a constant reminder to change and grow,” Mays said. “We just got to nurture ourselves and things. It just reminds me of growth. It’s always something new. It’s always a new leaf.”

Mays said she also relies on her family and friends. She said she is blessed to have the support of a circle of friends and wanted to acknowledge them, including her fiancé.

Mays was engaged to Greg on Dec. 31, 2019. She said Greg has helped and supported her through the healing process and often reminds her to take care of herself.

“If I’m really stressed, he’ll make me just completely stop and sit down, because I’ll drive myself into anxiety sometimes,” she said.

Greg will also tell her when it’s time for her to pamper herself, meaning it might be time to get her nails done or get a massage.

Mays said everyone should be able to be pampered, but she also recognizes the tough economic realities. People can barely afford basic needs in our communities, Mays said, let alone pampering. People that might need that healing the most simply can’t get it.

It’s still a struggle, Mays said, but she’s looking to the future. She hopes to keep serving the community, through her flowers and through her words. She also serves on the Community Collaborative Commission, which gives input on community policing and police-community relations. And she has a wedding to plan.

She finds strength every day to keep going. But one of her greatest sources of strength remains, and always will be, her late son.

“I know that Booka wouldn’t want me to be sad and be down. He would want me to continue,” she said. “It’s hard to explain, but the very thing that brings you down is what picks us up, motivates us to keep pushing.”