You are here: Home / Home / Carousel / ‘The leader our parents taught us to be’: The evolution of Nate Hamilton
Share this... 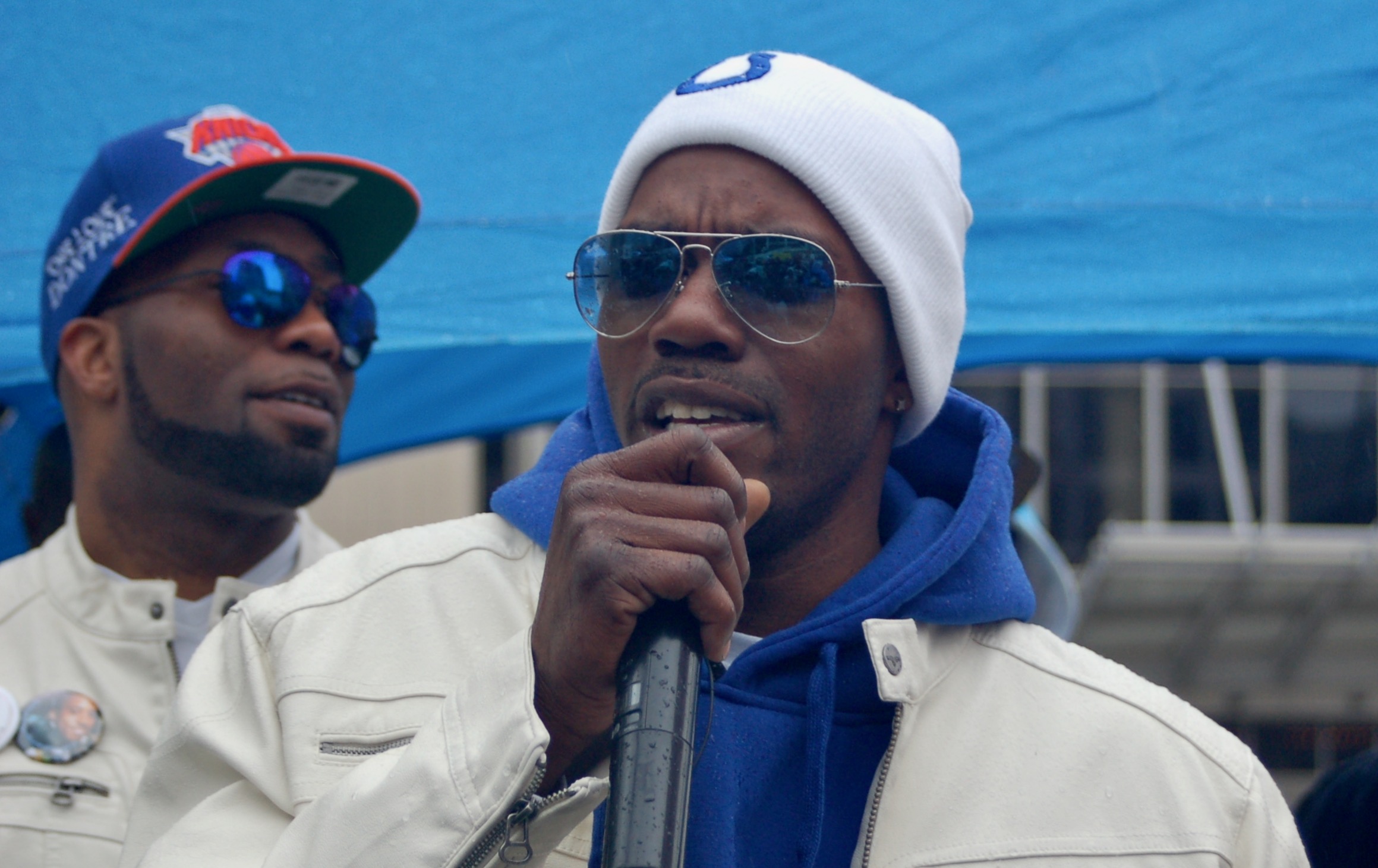 Nate Hamilton (right) exhorts the crowd to love one another and help build a peaceful community in 2016 as brother Dameion Perkins looks on. (File photo by Andrea Waxman)

Almost seven years ago, Nate Hamilton was working as a roofer, trying to create a good life for his two kids.

Then the death of his brother changed the direction of his life, launching him toward a leadership role to improve relations between police and the community.

His brother, Dontre Hamilton, was killed by a Milwaukee police officer on April 30, 2014, and the incident led to huge protests in Milwaukee and national media attention.

Hamilton became a spokesman for his family, the founder of the Coalition for Justice, and a leader of the protests – though always with an emphasis on nonviolence.

These days, Hamilton leads a city commission that aims to improve relations between the community and the Milwaukee Police Department.

Black people “both as individuals and as a whole, have failed to acknowledge the importance of ourselves,” Hamilton said. “It has become my goal to encourage people to attach themselves to what they care about and fight for it.”

Now a father of five, Hamilton is juggling parenting, being a business owner and police reform activism.

Hamilton attended Milwaukee Area Technical College to study carpentry and started a home-improvement business named Hamilton’s Improvements about a year after the death of his brother. His company does cosmetic work on houses from bathroom and kitchen remodeling to roofing and siding.

“I think people like Markasa Tucker and Tammy Rivera saw something in me,” Hamilton said, referring to earlier leaders of the committee that was a precursor to the CCC. “They knew I am wiling to listen and put myself in a position to learn, so they nominated me.”

The new CCC is made up of Black and brown grassroots leaders who work within Milwaukee neighborhoods. When it was still a committee, the CCC in 2017 gathered community input on the U.S. Department of Justice’s unfinished 2016 review of the Milwaukee Police Department.

The group presented its final report in 2019. All but one of the report’s recommendations have still not been taken, according to a June statement.

Doubtful yet hopeful that its recommendations will be implemented, Hamilton said the CCC is moving forward nevertheless.

“We want to create a Milwaukee where the environment is good for everybody,” he said. “Not only are we working to ensure the community is happy, but police as well.”

The CCC is urging the Milwaukee Police Department changes its standard operating procedures for community policing and understands its responsibility, Hamilton said.

Common Council President Cavalier Johnson said the CCC offers the best approach to re-examine the relationship between MPD and the community.

One of Hamilton’s best talents as a leader is his skill in communication, he said.

“I grew up with very responsive parents, so we communicated well,” he said. “I just wanted to give that to my kids, and that is still my goal.”

He said that because of the role he has taken as a community leader, people take him almost too seriously.

“I’m actually very talkative,” he said. “I like to laugh and have fun. I don’t think many people know that.”

“He is so passionate about whatever he is a part of that everyone doesn’t get to see it,” Perkins said. “But he can make you laugh.”

He said he especially appreciates how Hamilton stepped up after Dontre was killed.

“He took on learning the policies and procedures,” he said. “He became in that moment the leader our parents taught us to be.”

Hamilton also is finding time for himself.

The CCC’s next meeting is scheduled for 1 p.m. Thursday. Details of the virtual meeting are on the City of Milwaukee website. Community policing and the search for a new police chief are among the topics scheduled for discussion.

About PrincessSafiya Byers and Bridget Fogarty