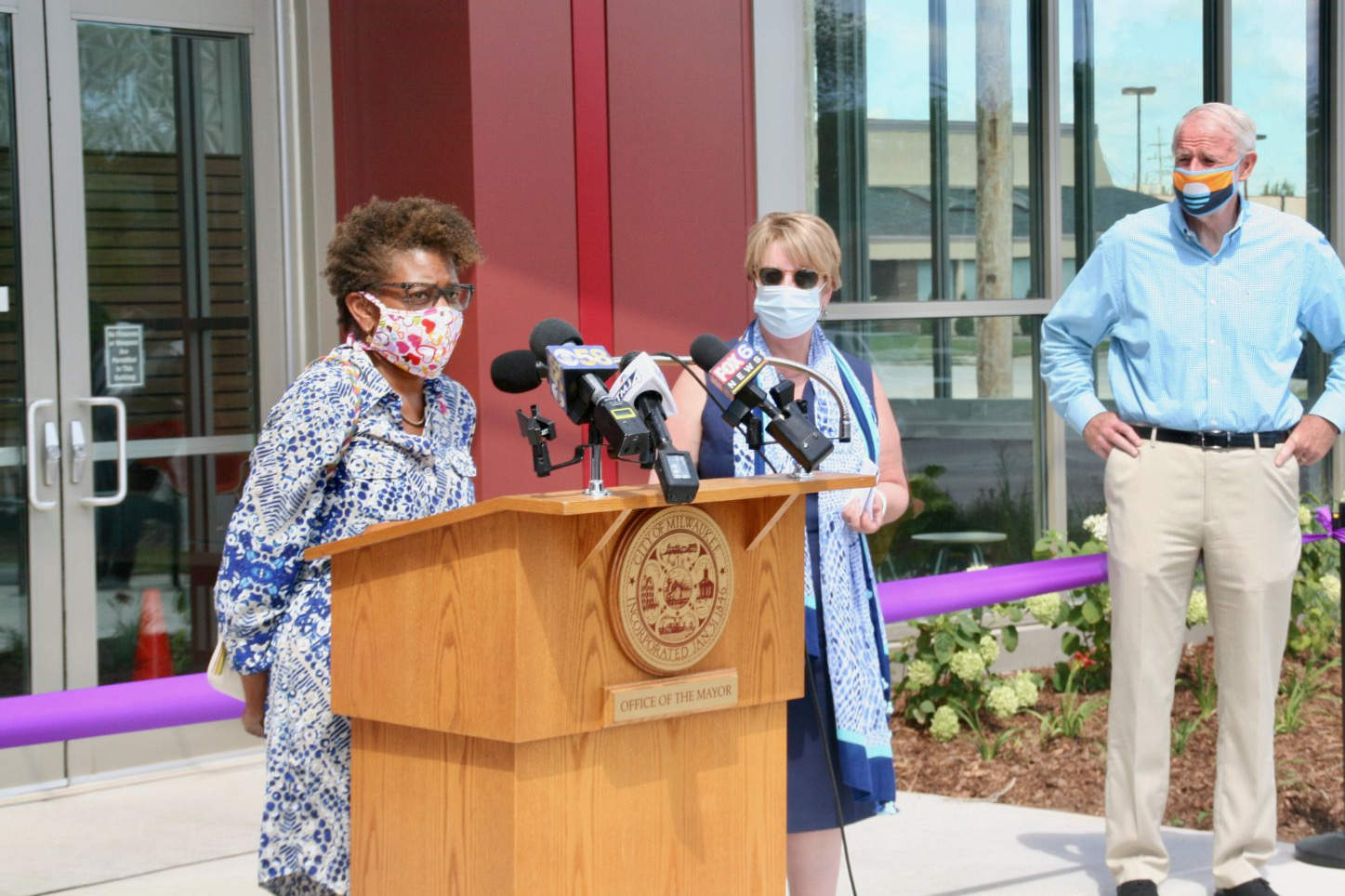 Johnson was officially named the director of the Milwaukee Public Library after Paula Kiely’s retirement in August.

Johnson, 59, joined the Milwaukee Public Library system in 2006. She is the first African American woman and the fourth woman overall to be named library director.

The library was her sanctuary

Johnson grew up in Milwaukee in the Concordia neighborhood. As a child, her babysitter would take her to the library every week.

“The thing I remember the most, was the trip to and from the library,” Johnson said.

Johnson loved going to the library, and it became a sanctuary for her. While attending West Division High School, now Milwaukee School of the Arts, Johnson began working as a library monitor.

A detour in interior design

After graduating from high school, Johnson went to UW-Madison, where she studied interior design and art. After earning her degree, Johnson worked in Buffalo, New York, on set designs, before returning to Milwaukee as a freelancer.

During her time as a freelancer, Johnson helped design the scenic designs for her high school’s productions. She later temporarily relocated to Chicago to work on the film, “The Untouchables,” before moving to Seattle.

“It was 10 years before I decided to go back and get my master’s in library sciences,” Johnson said.

From freelancing to her master’s

Upon landing in Seattle, Johnson struggled to get a job in interior design. Instead she connected with a temp agency and began working various jobs. For a brief time, she worked in politics and helped on a senator’s campaign. Eventually, she found a job related to the arts.

“I did a lot of different things,” Johnson said. “I freelanced a lot and did a lot of research for other artists.”

It was her research assignments that led her back to the library. Being in a library felt like home, Johnson said. Soon after, she chose to pursue a master’s in library sciences and specialize in bibliographic instruction and government information.

While attending school, Johnson worked part time at the library. As part of her research, Johnson asked patrons if they were aware of the resources the library offered. A library is not only informational, it’s empowering, Johnson said.

For 15 years, Johnson worked in the Seattle Public Library System as a branch manager and later as a department director. During this time, she helped rework and rebuild the library system.

Her return to Milwaukee

Johnson spent 20 years in Seattle before coming back home to be closer to her family.

“I saw an opportunity here in 2006 and was lucky to get in,” Johnson said. “I joined the administration team.”

Johnson started working on a building renewal project, as the lead for the internal design team.

“I brought my interior design experience to the table,” Johnson said.

Sam McGovern-Rowen, project manager of library construction and former member of the library board, got to know Johnson through their work on the building renewal projects. McGovern-Rowen said that Johnson made sure the libraires were both functional and user-friendly.

“Our libraires are really wonderful places,” he said. “Joan has put her stamp on all those places.”

McGovern-Rowen said Johnson had a clear vision down to the details on what she wanted for the library.

Under Johnson’s leadership, the library expanded its programming for teens and adults. She also created an internship position for teens.

Her plans for the future of Milwaukee Public Library

Rachel Arndt, the public services area manager of the Central Library, has worked closely with Johnson for the last five years and said she’s excited to see her take on her new role as library director.

“We’re going from one strong leader to another strong leader,” Arndt said, adding that Johnson loves people and loves Milwaukee.

Johnson isn’t wasting any time in tackling the issues facing Milwaukee and improving the library system.

“We’ve got to get better at expanding our capacity and taking advantage of growth opportunities that come our way,” Johnson said.

Johnson said the pandemic has exposed the disparities that exist in Milwaukee – including access to internet and digital technology.

Johnson said the library intends to double down on its digital resources, beginning with its hotspot lending program. The hotspot devices are always checked out, and Johnson hopes to have 500 of them in circulation.

In addition, the library system  is responding to calls for social and racial justice and will be looking through an equity lens to see what barriers lie in the way of all Milwaukeeans.  Through its many partnerships, the library aims to help improve the quality of life for all community members, Johnson said.

McGovern-Rowen pointed out that one of the biggest challenges facing the library is the budget.

“We as the library system – we’re good at shifting things around and keeping a good experience, but every year it gets tougher,” he said.