You are here: Home / Home / Carousel / ‘I watched her take on so many battles’: Community leaders reflect on the life of Maria Monreal-Cameron
Share this... 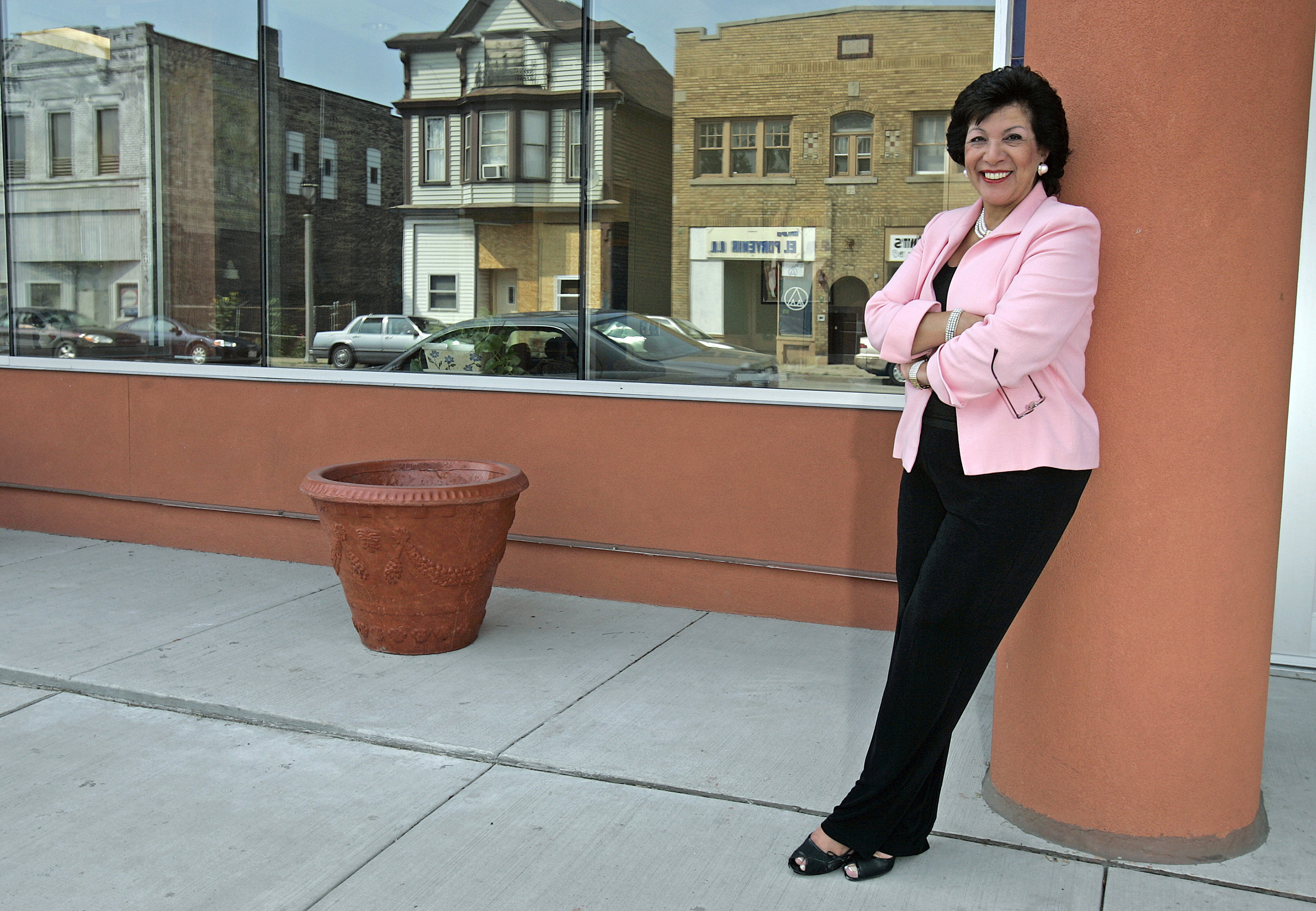 Maria Monreal-Cameron, shown in 2005 in front of the Hispanic Chamber of Commerce on National Avenue, inspired many in the community. (Photo courtesy of the Milwaukee Journal Sentinel)

As she accepted being awarded the 2013 BizTimes Women Executive of the Year, Maria Monreal-Cameron delivered a speech that spoke volumes about her passion for the community.

“I was given the unique opportunity to work for, by and with my Hispanic community,” she told the crowd. “Hispanic progress during the past two decades is undeniable and notable. Through our collective hard work, every day we are shaping this city, this state and certainly our counties.”

On Monday, the vocal community leader and longtime CEO and president of the Hispanic Chamber of Commerce of Wisconsin, died at the age of 75 after a battle with leukemia.

Although Monreal-Cameron accepted the award while preparing to retire from the chamber, she remained at the forefront of many issues that affected Milwaukee and Wisconsin, especially it’s Latino community. Her legacy is being celebrated by the many whose lives she touched.

“She was one of the first public figures that I saw actively, progressively trying to mobilize the Latino base,” said Jessica Cavazos, who first met Monreal-Cameron in the ‘90s while working as a sponsorship director for Mexican Fiesta.

Cavazos, who is executive director of Latino Chamber of Commerce of Dane County, described Monreal-Cameron as a change agent and credits her as a major reason that Latinos are an economic and political force in Milwaukee and across the state.

“Back in the day, you mainly heard about us being part of the workforce or as a source of labor, but she developed a space for leaders such as myself,” she said. “If it wasn’t for her ingenuity and her political savviness, I don’t think we would be advanced as a community as we are.”

Monreal-Cameron’s parents came to America as immigrants from Mexico. One of 13 siblings, she was born and raised in Milwaukee and took over the Hispanic Chamber of Commerce of Wisconsin in 1989. Under her leadership, the organization grew from 62 members to more than 500 when she retired in 2013.

The chamber also became nationally recognized under her watch, racking up multiple awards and bringing the annual United States Hispanic Chamber of Commerce convention to Milwaukee in 2005. Along the way, she helped to raise the profile of Hispanics and proudly spoke of their work ethic, entrepreneurial spirit and impact.

“In today’s global economy, Hispanics are not just employees and consumers,” she said during the speech in 2013. “In fact, we are employers and investors who are woven into every fabric of the American economy.”

In her role as a business leader and advocate, she mentored many, including Zonia Lopez, owner of Flylda Travel Agency. Lopez went to the Hispanic Chamber of Commerce in 2003 looking for support and met with Monreal-Cameron, with whom she shared her dream of opening a business. The guidance she received helped her launch a small business, which is still in operation, but it also went beyond that.

“She inspired me to focus on my role as a leader, and, in turn, my role as a woman, a mother and a member of a minority group,” Lopez said.

Peggy West, a former county supervisor, said she first met Monreal-Cameron as a 22-year-old with two small children and no professional experience.

“Maria showed me that as a Latina, you need to stand up for yourself, your community and for what you believe in,” West said.

Although they didn’t see eye-to-eye on some issues, she said, she admired the way Monreal-Cameron stood up for what she believed in.

“I watched her take on so many battles, never backing down and never conceding,” she said.

Victor Huyke, the owner and publisher of El Conquistador Latino Newspaper, said Monreal-Cameron was his mentor and an outspoken advocate for the community.

“She had no problem getting stuff off her chest and sharing her beliefs on issues,” Huyke said. “She was very involved in politics, education and other community issues, and although people didn’t always agree with her, everything she did was out of the care she had for her community,” he said.

Huyke recognized her accomplishments several times, giving her a Lifetime Achievement Award and a Key to the Community. Monreal-Cameron also won many other awards including the Business of Diversity Lifetime Achievement Award from the Business Journal, and the TEMPO Milwaukee Mentor Award. She was also known as a philanthropist and supported many other activities and committees.

Monreal-Cameron shared her thoughts on many community issues aside from business, including immigration and the role of women.

“For too long the role of professional women was taken for granted and discounted as insignificant, not worthy of recording for posterity,” she said in 2013.

She also spoke out on other issues, such as the importance of education, which she described as the great equalizer, and the need to support the city’s next generation of leaders.

“They must be properly equipped to take positions of leadership; to become professionals in our community,” she said. “It is abundantly clear, if our inner cities fail, Milwaukee fails. If Milwaukee fails economically, the region fails.”