You are here: Home / Home / Carousel / OPINION: As a white kid growing up in Milwaukee, Henry Aaron represented more than just baseball
Share this... 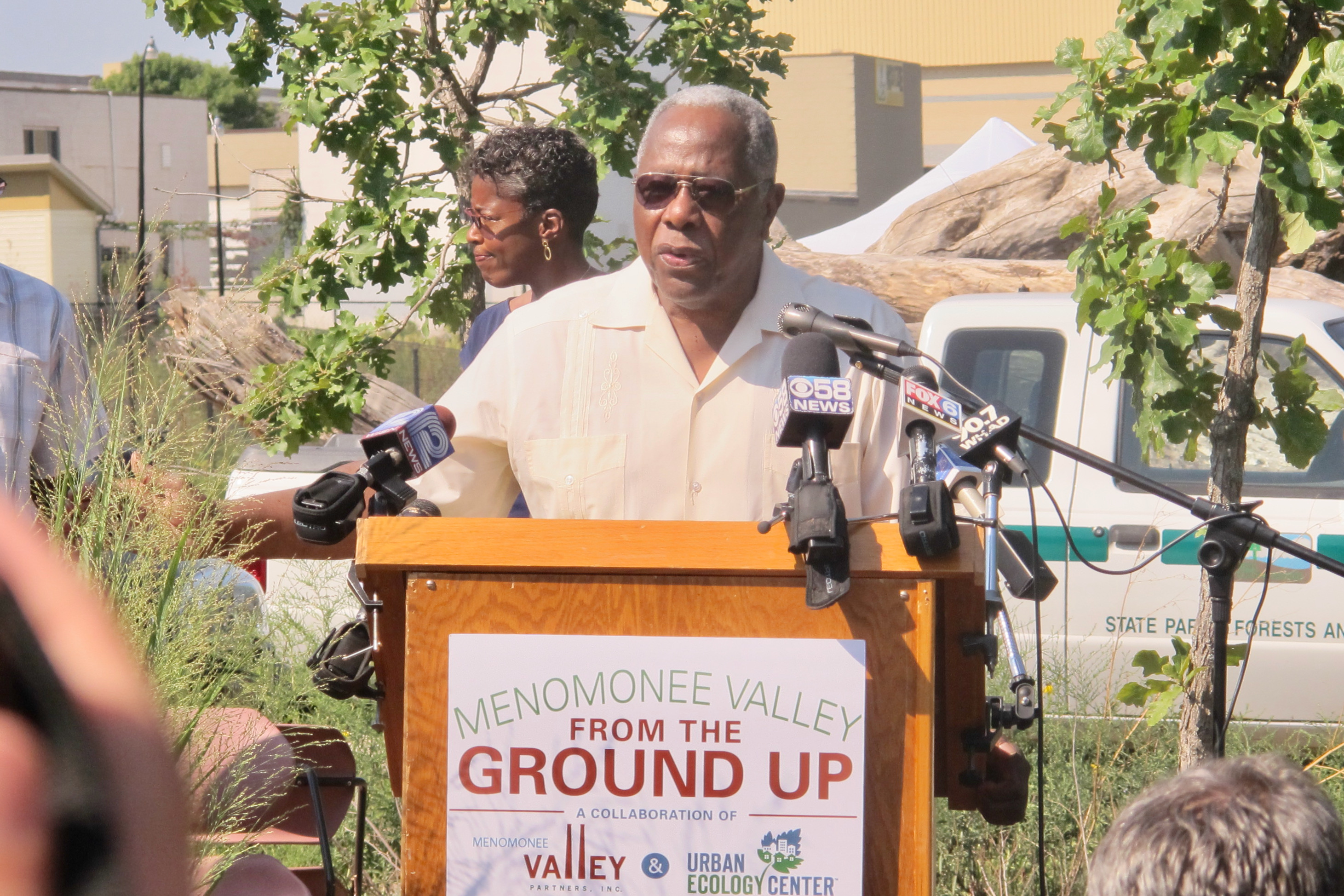 Henry Aaron was the guest of honor at the groundbreaking ceremony for Three Bridges Park in the Menomonee Valley in 2012. (Photo by Edgar Mendez)

In this year of death, suffering and dislocation, Henry Aaron’s passing at age 86 will be duly noted, and his extraordinary baseball accomplishments celebrated. It is quite possible that, had he played in New York or Los Angeles, he would be seen as the greatest player ever.

But for a group of white kids in Milwaukee, growing up just when he arrived in 1954, Henry Aaron’s impact went well beyond baseball. And his passing is a particularly somber event, especially as this group now confronts its own mortality.

The enormous impact of the Braves arrival in Milwaukee in 1953 is hard to overstate. We were now big league. Race barely entered into the discussion in those pre-civil rights days. My friends and I went to all-white schools and played on all-white playgrounds and parks. Our Stars of Yesterday team, Milwaukee’s low-budget, working class version of Little League, played at Merrill Park on North 35th and Clybourn Streets. The league was all white.

As a result, our views on race, to the extent that we had any, were formed based on our parents’ and neighbors’ stereotypes. At that time, the Black image in the white mind was not today’s menacing one. It was of a group of people who weren’t too bright, didn’t work hard the way white people did — “shiftless” was the term of art — and went to get welfare checks in pink Cadillacs. And, because they never encountered anyone Black, there was little to refute these stereotypes. The N-word was verboten, evidence that “the colored are treated good here,” a view that you would be hard pressed to find a white person not sharing.

For a group of impressionable, baseball crazed pre-adolescents, there was nothing like the arrival of the Braves from Boston. From our diamond at Merrill Park, we could look down into the valley at County Stadium and dream of wearing a Braves uniform. And this is where, especially with the arrival of Henry Aaron, race and cognitive dissonance came into play.

These early Braves included a number of Black players, among them Aaron, Bill Bruton, George Crowe and Wes Covington. What struck us as kids when these players were interviewed or talked to you after batting or infield practice when you skipped school to sneak into a day game, was how “smart” they seemed. They also had what could be referred to as dignity. All of a sudden, those white kids playing at Merrill Park began to imitate Aaron’s distinctive running stride.

(This scenario would be repeated with the Lombardi Packers of Willie Wood, Willie Davis, Herb Adderley, Lionel Aldridge, Elijah Pitts and others.)

In some ways, Wes Covington was the outlier in this group because he didn’t smile for white people. As a result, he was labeled as being “surly,” which, more or less, meant that he didn’t appreciate everything white people were doing for him. As a white Yugoslav kid who generally tried to avoid looking on the bright side of things, I thought that surliness seemed like a kind of cool quality. So I immediately gravitated to Covington and followed his career even after he left the Braves. It has always been interesting to me that later in life, Covington migrated to Canada.

Probably by accident, those early Braves had a number of white players, including fan favorites, who could be reasonably described as dummies and were also not very dignified. Over time, not as some bolt of lightning, some in our group of white kids began to doubt what adults, including our parents, had taught us about these things. Our minds were opening. We were beginning to think for ourselves.

Much has been written about the vicious racism that Henry Aaron faced as he closed in on Babe Ruth’s home run record. The experience of these kids in Milwaukee in the years at the dawn the civil rights movement is a whole other story, one that changed lives in ways that have become clear only after looking back after many years.

Henry Aaron was a great man. In a lot of ways.

Inside the NNS newsroom: Community voices have never been more important. Here’s how to get yours published.