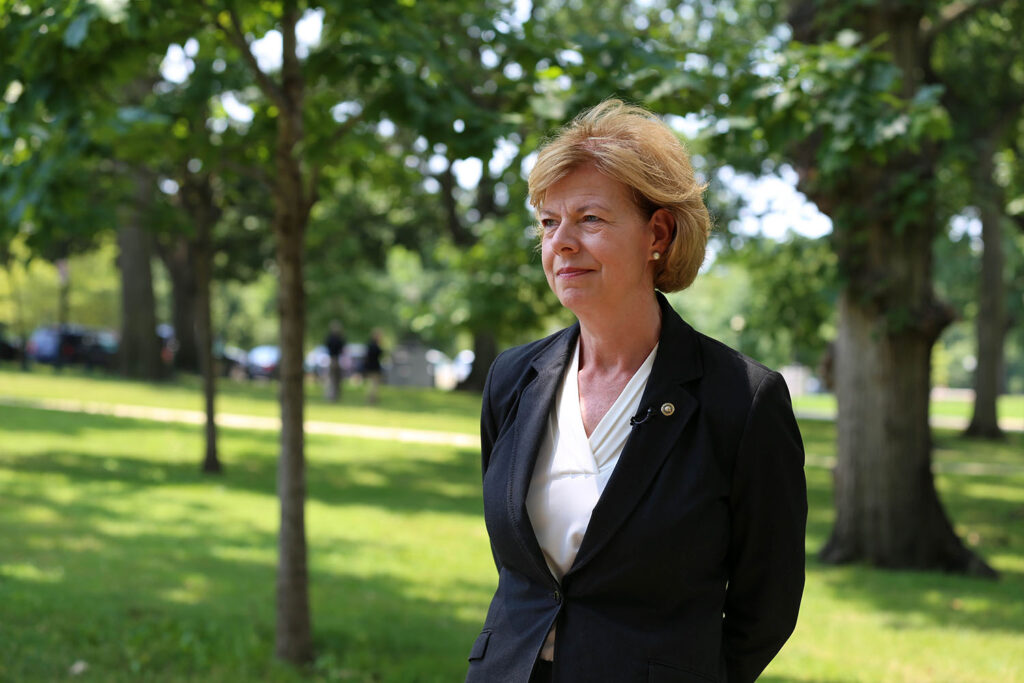 U.S. Senator Tammy Baldwin (D-WI) joined Senator Cory Booker (D-NJ) and Congresswoman Ayanna Pressley (MA-07) to reintroduce the American Opportunity Accounts Act, legislation seeking to create a national program commonly referred to as “Baby Bonds.” This groundbreaking bill will create a federally-funded savings account for every American child at birth that will grow each year depending on family income, making economic opportunity a birthright for every American and helping close the racial wealth gap.

The American Opportunity Accounts Act, also known as “Baby Bonds”, will create a new American birthright – giving every child a fair chance at economic opportunity and mobility. The legislation will create and seed a savings account of $1,000 at birth, with additional deposits of up to $2,000 each year, depending on household income. The funds will sit in an interest-bearing account, which can be accessed by account holders at age 18 for allowable uses like buying a home, paying for educational expenses or starting a business.

“The growing gap between those at the top and everybody else has been at historic highs and much of the wealth gap is along racial lines. Too many people are being left behind by Washington and we should take bold action to start helping them get ahead by creating economic opportunity for all Americans,” said Senator Baldwin.“Wisconsin’s economy is strongest when we extend and expand opportunity for everyone. This legislation will create upward economic mobility for every child in America. With this investment, we can help close the racial wealth gap and advance racial equity across our economy.”

“The American Opportunity Accounts Act is one of the most important investments in equity Washington can make to help close the racial wealth gap, increase the net worth of millions of families, and set the next generation up for success,” said Milwaukee County Executive David Crowley. “The Milwaukee metro area has one of the largest wealth gaps in the country, it’s just one of the many disparities that are the legacy of generations of policies that benefited white Americans on the backs of Black Americans, Indigenous peoples, and other people of color. The problem was created by policy in Washington, and now Washington has an opportunity to fix it. The time for change is always now and we can start with swift passage of the American Opportunity Accounts Act.”

Over the last few years, momentum for Baby Bonds has grown in Congress and in state legislatures across the country. In just the last year, the legislation has gone from 1 to 14 Senate cosponsors, covering the full breadth of the Democratic caucus, including Senate Majority Leader Chuck Schumer, and state-level proposals have been proposed in multiple states. Recent studies by Columbia University and Morningstar have found that a program like Baby Bonds would substantially close the racial wealth gap in America.

“To truly ‘build back better’ our economy, we cannot ignore the extreme and persistent wealth inequality that deprives kids of economic opportunity right out of the gate,” said Senator Booker. “We know this growing gap has been driven in part by federal policies and a federal tax code that subsidizes asset building for some Americans but fails to extend and expand that opportunity for all Americans. Baby Bonds will start to level the playing field. In a country as wealthy as ours, every person should have access to economic opportunity and the chance to build assets and create wealth. I am proud to re-introduce the American Opportunity Accounts Act with 14 of my Senate Democratic colleagues. This legislation represents an ambitious, evidence-based, and practical approach to building a foundation for wealth-building and opportunity for all Americans.”

“The racial wealth gap in my district and across the country is stark and only getting worse, exacerbating inequities and denying far too many people of color an opportunity to thrive,” said Congresswoman Pressley. “These disparities are the direct result of generations of policy violence exacted against Black and brown communities, so we must be every bit as intentional in advancing policies that center racial and economic justice – policies like Baby Bonds. Baby Bonds are one of the most effective tools at our disposal to help close the racial wealth gap and break generational cycles of poverty. By establishing Baby Bonds as a birthright, our bill will provide every child an opportunity to pursue higher education, purchase a home, and build wealth for generations to come.”

“Giving our youngest Americans and their working parents an economic opportunity like baby bonds would deliver strong economic relief and mark an investment in our collective future,” said Senate Majority Leader Chuck Schumer. “I am proud to back this legislation led by Senator Booker and Rep. Pressley because it will help address inequality, establish the foundation of a solid financial future for our kids and serve as a down payment on the milestones that too many families find are out of basic reach.”

At birth, every American child would be given an “American Opportunity Account” seeded with $1,000. Each year, children would receive up to an additional $2,000 deposit into their American Opportunity Account, depending on family income. These funds would sit in a federally insured account managed by the Treasury Department, achieving roughly 3 percent interest. Account holders may access the money once they reach age 18 and use the funds for allowable uses like homeownership, financing a higher education or starting a small business— the kind of investments that change life trajectories.