You are here: Home / Home / Carousel / Fire safety 101: The habits and resources you need to survive
Share this... 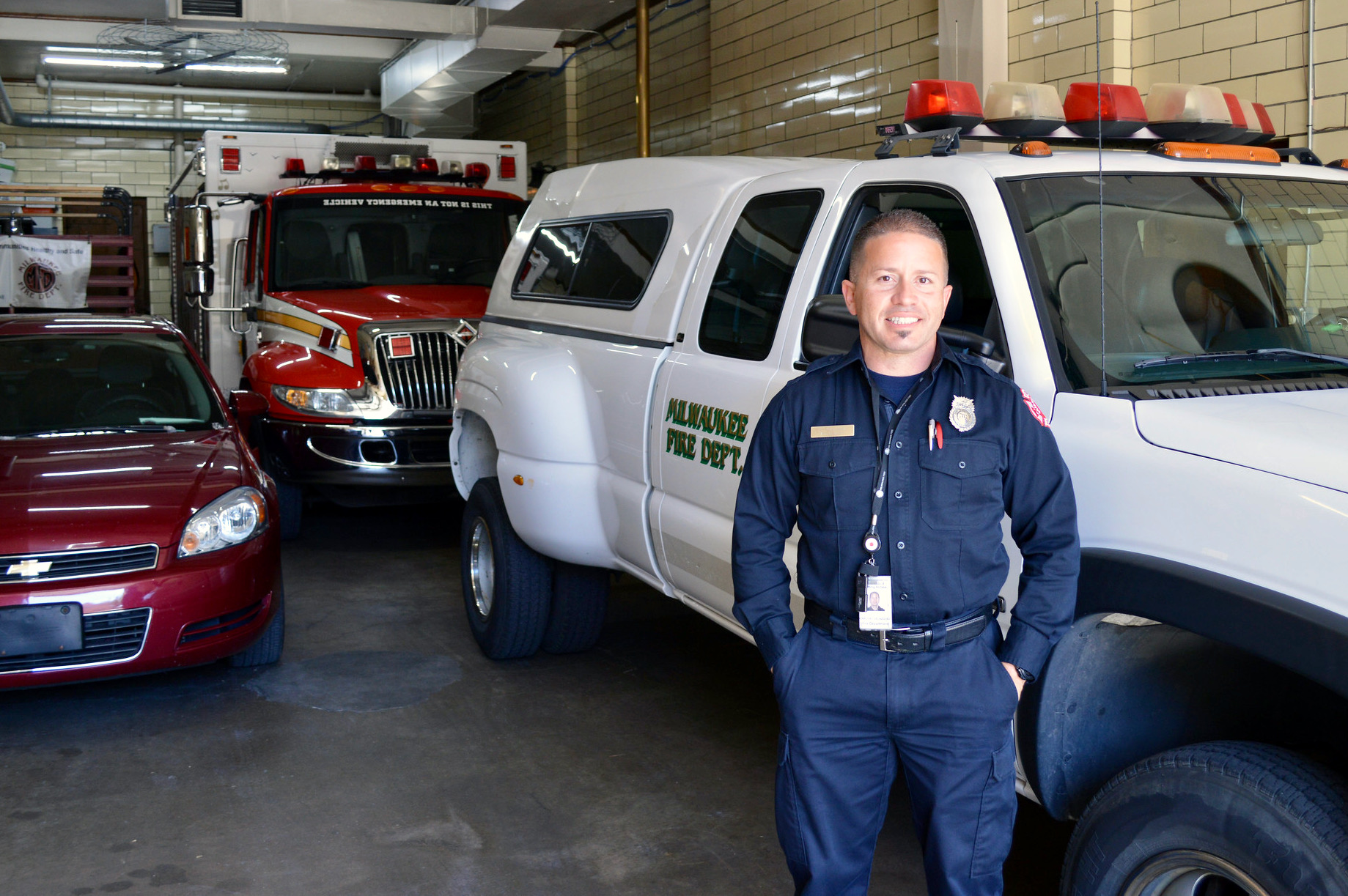 Carlos Velazquez-Sanchez says a majority of house fires start in the kitchen due to carelessness. (Photo by Ana Martinez-Ortiz)

Editor’s note: A wave of deadly fires this month on the South Side prompted us to update this story, which we first published in July 2019.

When a fire started to burn in the upstairs flat of a duplex, the downstairs neighbor called the Milwaukee Fire Department.

As smoke billowed from the windows, the upper duplex’s occupant had failed to respond.

Carlos Velazquez-Sanchez said when he and other firefighters broke the door to enter the home, they found a ham cooking—or rather burning—in the oven.

It turned out that the upstairs neighbor was an elderly woman who had gone to church and thought she had more time.

“If the person is by the stove or kitchen, they’ll catch the fire in time,” Velazquez-Sanchez said. But people think it won’t happen to them, so they aren’t prepared.

In 2019, the Milwaukee Fire Department responded to 3,568 fires, according to its annual report. The 2020 report is not yet available to the public.

Velazquez-Sanchez has been a firefighter for the past 13 years. Currently he works as one of three education specialists in the department’s Community Relations Division, 1693 N. Franklin Place, which had previously housed Fire Engine 6.

During his career, Velazquez-Sanchez has fought a lot of fires, and most of them start in the kitchen, he said.

While car fires are more likely to occur in the fall due to parking over dry leaves, house fires occur year- round no matter the weather, Velazquez-Sanchez said.

On average, there’s seven to 11 fires a day in Milwaukee. Typically, a fire will double in size almost every 30 seconds, Velazquez-Sanchez said.

Velazquez-Sanchez offers the following tips on dealing with a fire:

What to do if there is a fire

If there is a fire in your house, the first thing to do is make sure everybody leaves the house and to call 911. The sooner a call is made, the sooner the firefighters are dispatched. It usually takes a station five minutes to arrive, Velazquez-Sanchez said.

If the fire is smaller than a small wastebasket, the use of a fire extinguisher can be attempted after making sure everyone is outside and someone is in charge of calling 911. Pull the pin, aim at the base of the fire, squeeze the handle to discharge the extinguishing solution and sweep side to side to put out the fire. Make sure there are 6 feet to 10 feet between you and the fire and an exit behind you.

Once the firefighters arrive and put out the fire, they’ll overhaul or break apart the walls and/or ceiling to make sure the fire is completely out. 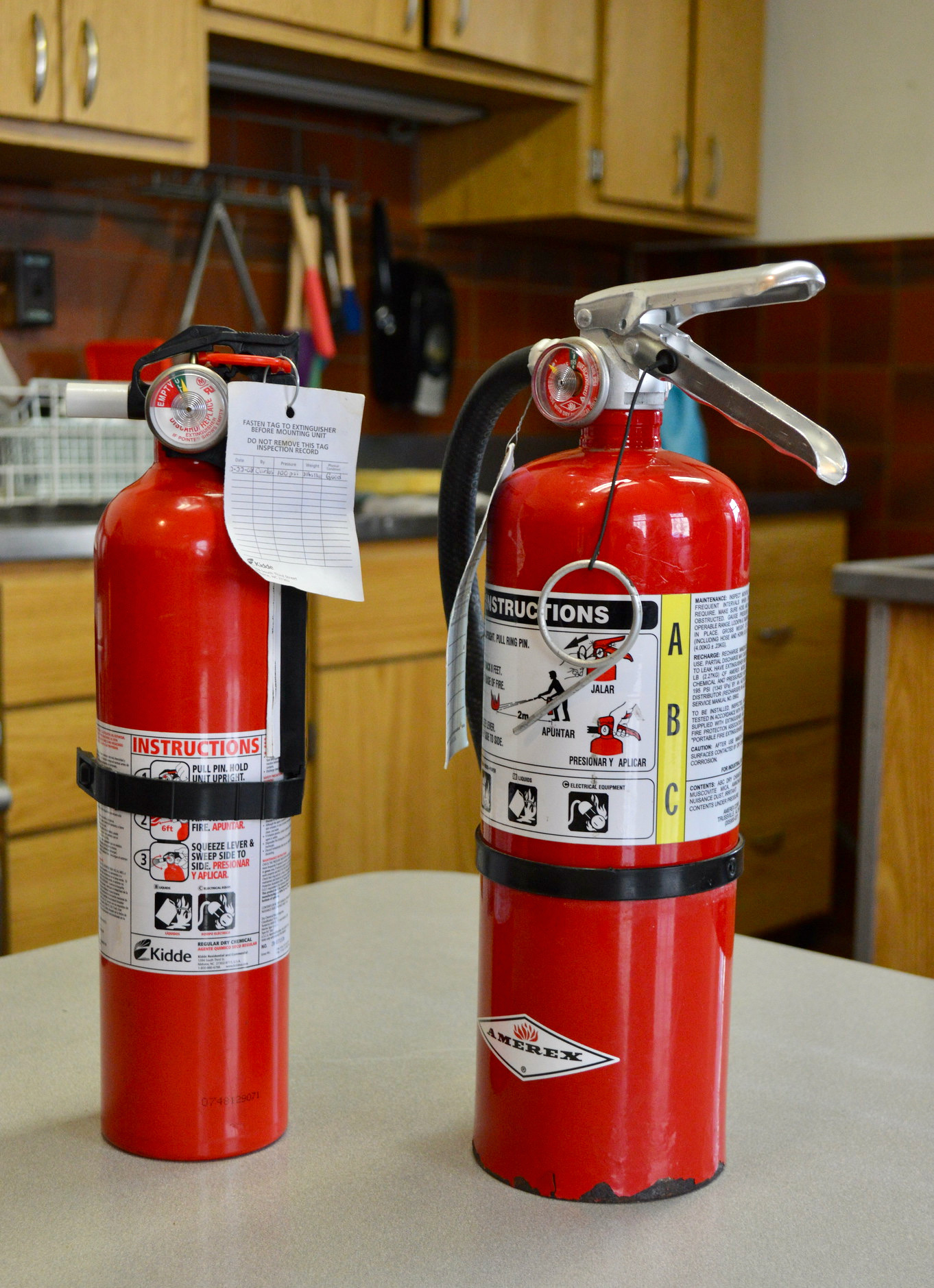 Smoke alarms and carbon monoxide detectors:  Smoke alarms work 24 hours a day. There should be a smoke alarm on every level of the house, preferably, with one on the ceiling or high on the wall on the hallway outside the bedrooms and one inside each bedroom. The reason for this is that smoke may put people into a deeper sleep said Velazquez-Sanchez. Fire alarms can be sensitive so it’s best to have one 10 feet away from stoves.

A carbon monoxide detector should be placed on the wall about five feet from the floor and close to any heating vent or appliance, which can introduce carbon monoxide into the home. The symptoms of carbon monoxide poisoning are similar to the flu or food poisoning and includes headaches, nausea, dizziness, light headedness and shortness of breath.

Velazquez-Sanchez recommends a detector that is run by both batteries and electricity. If the power goes out or if the battery dies the detector can still function with the alternative energy source.

Escape plan: Everyone should have an escape plan and it should be planned with the entire household. Velazquez-Sanchez said people should draw a map of their home and determine two ways to escape from every room: either the door or the window. If the window is on a second floor or higher, having an escape ladder would be beneficial in case escaping through the window is necessary. There also needs to be a meeting place to confirm that everyone has escaped.

Velazquez-Sanchez said families need to practice an escape to ensure that everyone knows what they’re doing.

Additional resources and advice: Velazquez-Sanchez recommends some habits to further ensure fire safety in the home. He said people should practice, “close before you doze.” In other words, close your bedroom door before sleeping to prevent the smoke, heat and fire from entering your bedroom and spreading.

If a fire breaks out and you are trapped in your room, hang a blanket out the window and stay by the window. It’s important to stay visible, so that firefighters can find and rescue you. Having a flashlight by the window can help to get people’s attention if needed.

During a fire, touch the door and around the doorframe with the back of your hand before opening the door. If it’s hot, use your alternative escape option. If it’s cool, then open the door slowly and check for smoke or flames. Once you leave the room, close the door behind you to prevent smoke from entering your room in case you have to return to it.

Also, patch up old holes and spaces so a fire can’t spread. Keep the chute open in the fireplace when having a fire. Don’t smoke while using an oxygen tank. And park away from dry leaves to prevent car fires.

Read: ‘The workload is through the roof’: How the closing of South Side station is affecting the Milwaukee Fire Department