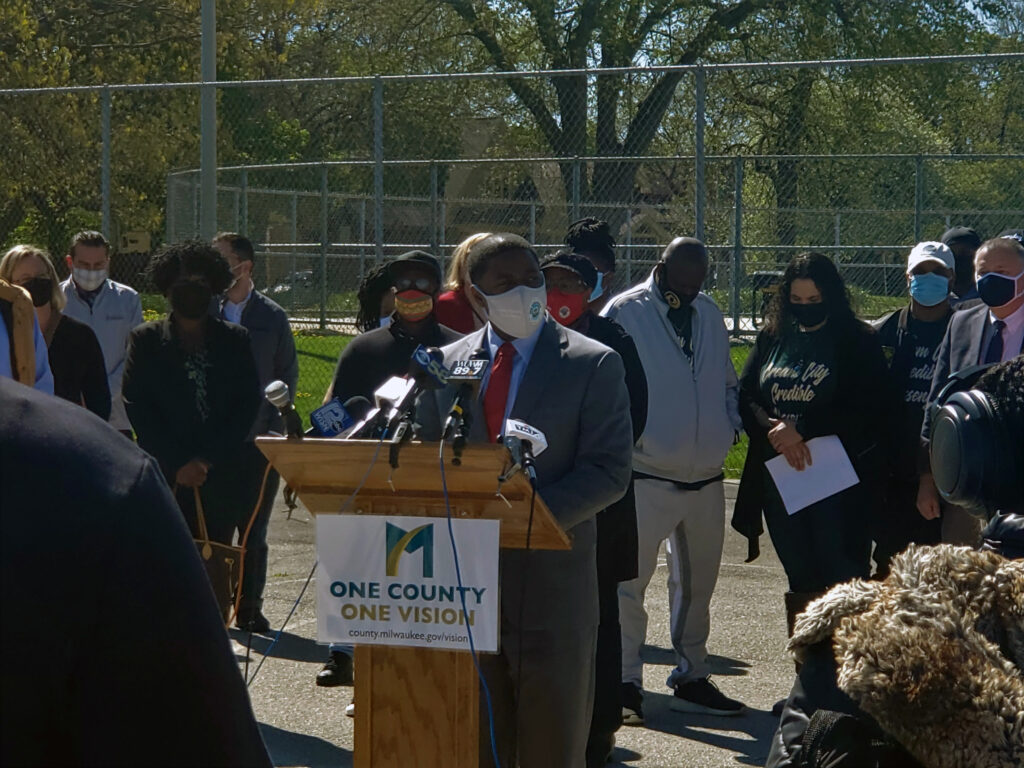 Milwaukee County Executive David Crowley discusses the county’s new Credible Messengers program Wednesday in Sherman Park. The program pairs youth who have had trouble with the law with mentors who have had similar experiences. (Photo by Matt Martinez)

A new program will pair 68 youth who have been involved in the juvenile justice system with 23 mentors in an effort to curb violence, Milwaukee County Executive David Crowley and several community partners announced Wednesday.

During a news conference at Sherman Park, Crowley expressed concerns about how arguments have escalated into violence, particularly after a violent 2020 that set a record for homicides in Milwaukee.

“They are showing us the consequences of neglect, of disinvestment, of disengagement with the young people,” said David Muhammad, deputy director of the county’s Department of Health and Human Services.

The Credible Messenger program will be housed in the Milwaukee County Behavioral Health Division and receive support from the city’s Office of Violence Prevention. “Credible messengers” are people with similar lived experiences who are brought on to mentor youth and help them navigate life.

Once connected, mentors will be available to their mentees 24 hours a day. They’ll check in regularly, providing support where it’s needed and connect kids with resources.

The mentors will come from five community organizations and programs: 414Life, Running Rebels, Milwaukee Christian Center, the Youth Advocate Program, which supports re-entry efforts for youth in the Division of Youth & Family Services, and WestCare Wisconsin, which provides social services in the Harmabee neighborhood.

The Board of Supervisors in May adopted a resolution to allow those with certain criminal convictions to serve as credible messengers for at-risk youth in Milwaukee County.

Dawn Barnett, co-executive director and a mentor at Running Rebels, stressed the importance of authenticity. The program will initially focus on teens in the youth justice system but could expand.

Barnett said mentors will need to encourage the youth to pursue their interests.

“You have to have those times when it’s not about them being in trouble, it’s about working on the relationship and showing them a different way to live in general,” Barnett said.

Kweku TeAngelo Cargile Jr., youth injury and violence prevention coordinator at the Office of Violence Prevention, said as someone who had a mentor who helped him through college, he’s been on both sides of the equation.

“You need someone to actively listen,” he said. “Someone who can hear your struggles and accomplishments, who can congratulate you and support you.”

Janiya Williams, a 16-year-old community organizer who has participated in anti-violence efforts and helps organize protests, said she wished more resources were directed toward empowering young people like her to help those struggling.

“It’s always ‘the youth are our future,’” Williams said. “They still don’t want to listen to the youth.”

Williams said young people are uniquely qualified to relate to each other. For example, she said, adults might share some experiences, but none can relate to missing a year of school because of a pandemic.

Williams also said she hoped more resources would be put toward keeping kids from entering the justice system in the first place.

Regardless of what form it takes, violence in the city needs to be addressed, she said.

The program’s launch comes after the fatal shooting in late April of a 17-year-old boy in Sherman Park.