You are here: Home / Home / Carousel / She wanted to bury her stillborn son. But no clothes fit him.
Share this... 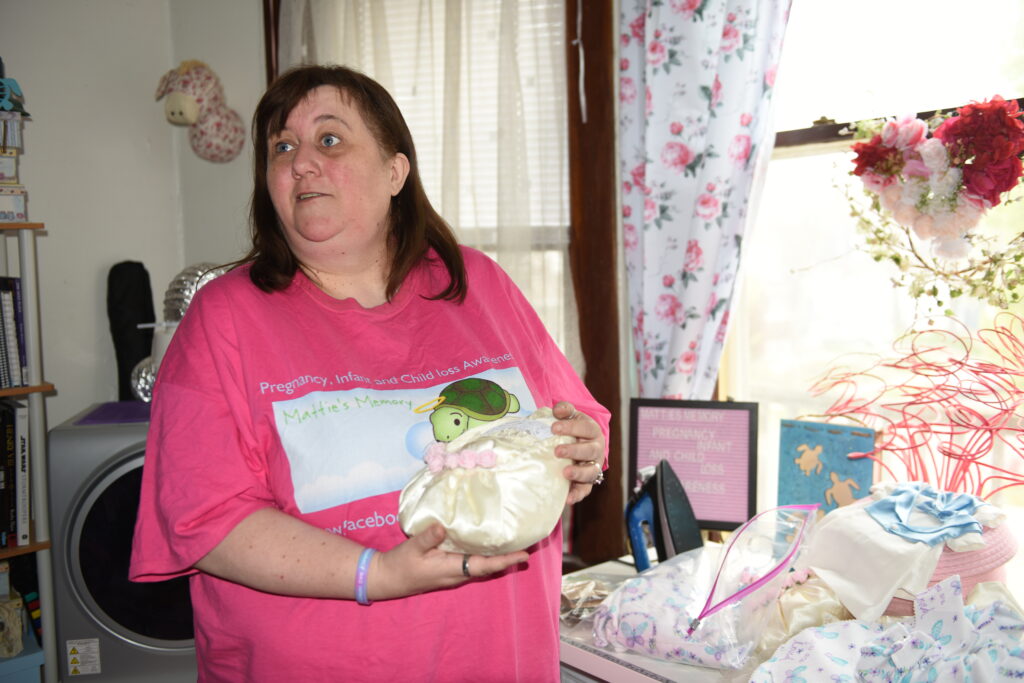 Hazel Jones makes donation bags with burial gowns and caps for families who have lost children. Here, she holds a bassinet she made for donation. (Photo by Sue Vliet)

In her apartment, dozens of stuffed and ceramic turtles decorate the walls. Hazel’s husband, Artrell Jones, was the first to make the connection between Mattie and the turtles. He loves the animals himself and suspects his son would have, too.

Other things, like the smell of peaches, red and black butterflies and yellow daisies all bring Mattie back to Hazel. Each of them has a significance, in one way or another. Every day without him is still a struggle, she said.

Matthew Aaron Jones was delivered stillborn. During a routine ultrasound when she was 20 weeks pregnant, the doctor told Hazel that Mattie’s heart wasn’t beating. What followed was a pain that she “wouldn’t wish on anybody.” 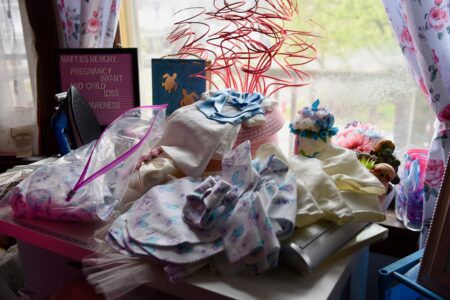 Each month, Hazel Jones delivers donation bags to local hospitals for families that have lost a child in infancy or childbirth. (Photo by Sue Vliet)

Amid the flurry of emotions after that was a mountain of paperwork and processes for the family to go through. Medical bills began to pile up that Hazel and Artrell had no hopes of paying. Along with their older son, Robert, they experienced homelessness for about 10 months trying to pay off the bills.

What stuck with Hazel most, however, was her son’s burial. The baby was only 6 inches long and weighed only 3 ½ half ounces, so the hospital did not have small enough clothes for him to wear.

That’s why Hazel decided to help those who have lost children – in Mattie’s memory.

Hazel established the organization Mattie’s Memory in 2012, with the goal of providing “memory bags” and bereavement information to hospitals throughout Southeastern Wisconsin. The bags include items for families to keep in memory of their child as well as burial gowns and other clothing for the babies themselves.

After the project was announced, she received a deluge of fabric and wedding dresses, which Hazel turns into burial gowns for the children who have gone too soon. She also makes hats, blankets and small bassinets.

Each month, she delivers donation bags to local hospitals for families that have lost a child in infancy or childbirth. The donations help address a shortage in burial gowns at the hospitals as well as provide some comfort for the bereaved, Hazel said. 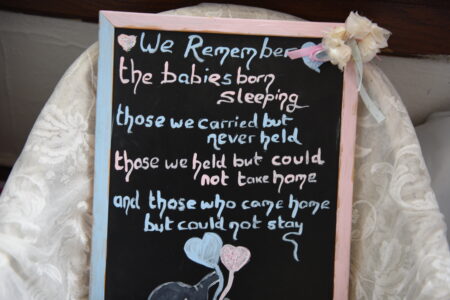 “It’s like walking through a dark tunnel and the people who get it are at the end with a light,” says Hazel Jones about losing a child. (Photo by Sue Vliet)

“I just hate to see people hurting,” she said.

Hazel also puts together information for families trying to figure out what’s next after losing a child. The process can be difficult and confusing, she said, and hard to navigate in grief.

Hazel also is involved in an effort to get a tax credit for parents of stillborn children passed in the Wisconsin Legislature.

This type of support is especially important in Milwaukee, where 10 in every 1,000 pregnancies end in infant mortality, and another seven in every 1,000 end in stillbirth, according to a report from the Milwaukee Health Department on stillbirths and infant deaths from 2012 to 2015 in the city.

Wisconsin also was found to have the worst rate of infant mortality for Black children in a 2018 report covering the years 2013-’15. The state had the highest rate in the nation with 14.26 in every 1,000 Black pregnancies ending in infant mortality, according to the Centers for Disease Control and Prevention. Black children died at three times the rate of white children before their first birthday.

‘I have to be strong for her’

Doing the work Hazel does can be daunting, but Hazel doesn’t do it by herself.

Artrell is involved with Mattie’s Memory, providing support every step of the way.

“I have to be strong for her,” Artrell, known as AJ, said. “I try to be tough about it, but I do grieve as well. Because it affects me, but at the time being there for her was more important than how I felt.”

Their roommate, Mike Isler, also lends his artwork to the project, designing logos and graphics for the Mattie’s Memory Facebook page and making art for giveaways. 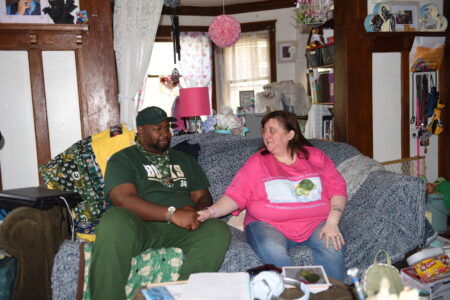 “I have to be strong for her,” says Artrell “AJ” Jones about his wife, Hazel. “I try to be tough about it, but I do grieve as well. Because it affects me, but at the time being there for her was more important than how I felt.” (Photo by Sue Vliet)

“I know it brings comfort to just have something,” she said.

Skovera also represents an important piece of the bigger picture: Community. Among those who have lost children, there is a prevailing sense of togetherness and a common pain that few others can relate to.

“It’s like walking through a dark tunnel and the people who get it are at the end with a light,” Hazel said.

Skovera has also lost children. And Hazel said they can pick each other up when they’re down without saying a word.

“We’ll just sit there, not do anything, just sit there quietly,” Hazel said. “And we don’t have to ask each other what’s wrong. We get it.”

Though she’s learned to live with it, Hazel said the grief still manifests in her day-to-day life. Sometimes a movie or a trip to the store will bring up bad feelings.

“We call it the ‘ugly shoes journey,’” Hazel said. “Because it’s the ugliest pair of shoes you’ll wear in your life, and it’s the most painful.”

The saying is based on a poem by an unknown author, Hazel said, that many who have endured loss can relate to.

Hazel has also found another calling as a registered doula in Milwaukee. She also offers bereavement doula services as part of Mattie’s Memory. 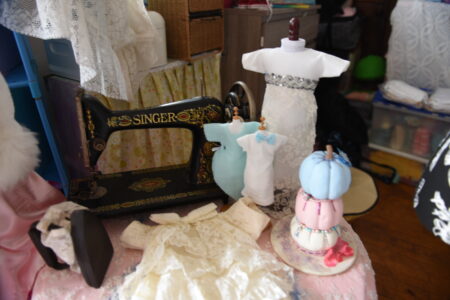 Hazel Jones established Mattie’s Memory in 2012, with the goal of providing memory bags and bereavement information to hospitals throughout the state. (Photo by Sue Vliet)

Two years ago, Hazel even delivered one of Skovera’s grandchildren: a little boy named Taylor, whom Hazel refers to as “Squishie.” It’s a long way from being fearful of holding babies just a few years ago, Hazel said.

As her work continues, Hazel said the end goal is helping to provide comfort in camaraderie for those who have lost children.

“It’s that unity of knowing that there’s somebody out there who gets it,” Hazel said. “We don’t hear very often from families, but when we do, it’s normally ‘Thank you for not making me feel alone. Thank you for being there. Thank you for understanding.’”

Mattie’s Memory has made over 6,000 gowns since 2012 and hosts community events to raise awareness for child loss.  To donate, contact Hazel Jones at facebook.com/mattiesmemory.