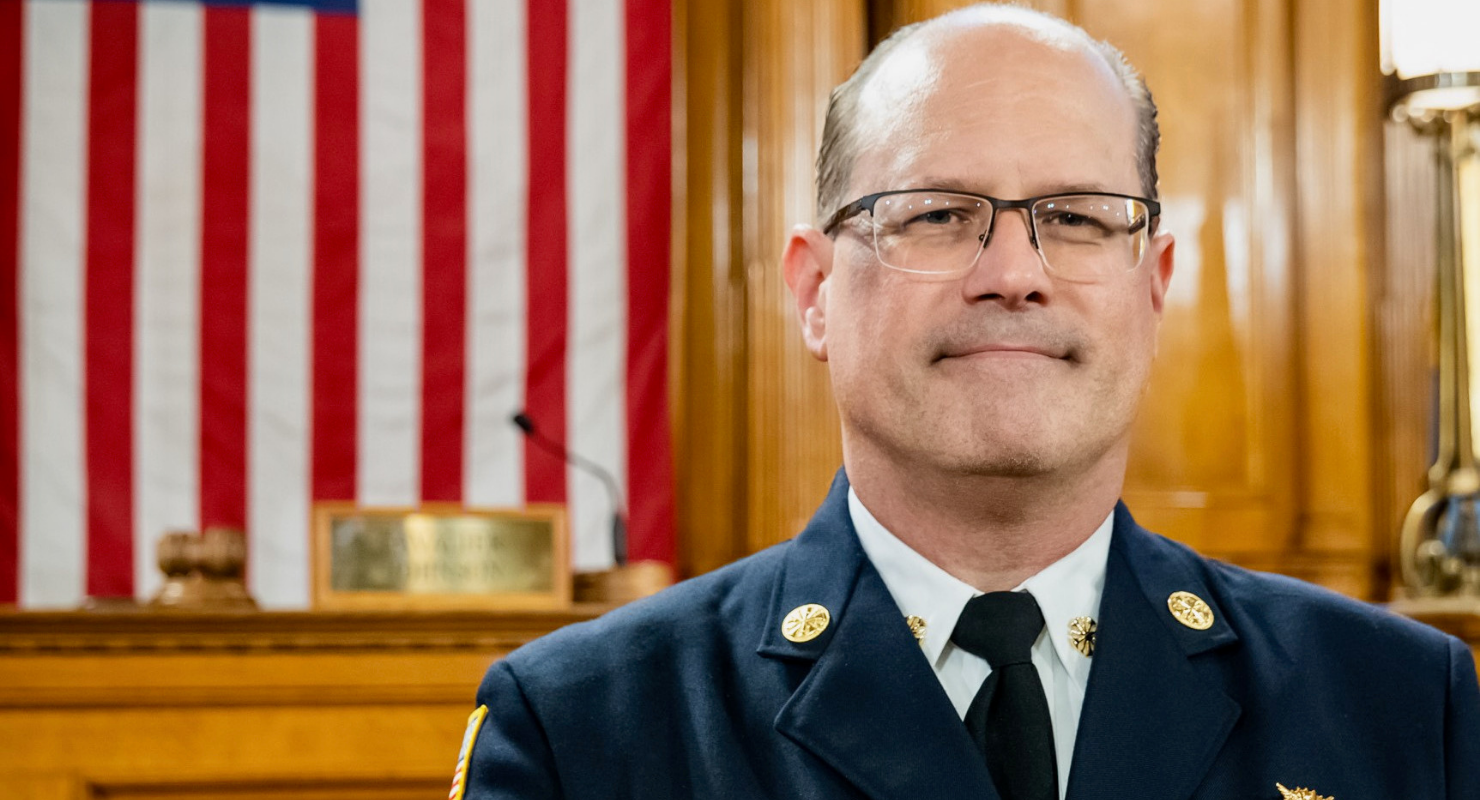 His great-grandfather, grandfather and father all served as City of Milwaukee firefighters, but Lipski said he never felt pressured to follow in their footsteps.

“They said to do something that doesn’t beat your body up so much,” said Lipski about his father and grandfather.

So he did, working for a few years as an emergency medical technician for Paratech Ambulance.

Fate eventually intervened, and his father asked Lipski, then 21, if he was interested in taking the tests needed to join the fire academy.

“It was like a light switch went off, and I’ve never thought of anything else since,” said Lipski, who is now 47.  Along the way, he married his wife of 20 years, Krista, and they have a 15-year-old daughter named Isabella.

In the 24 years since his days at the academy, Lipski has risen through the ranks, going from firefighter to heavy equipment operator to lieutenant to captain to running the department repair shop to battalion chief to assistant chief. Now he sits at the helm of Wisconsin’s largest fire department.

Being at the top is something Lipski never would have imagined the day he responded to his first blaze two blocks away from the now-shuttered firehouse on North 30th Street and West St. Paul Avenue.

“I just remember how fast my heart was beating,” he said. “And just like that, it was out.”

Like most new members of the department at the time, his main job was to drag out the hose.

The scales of danger would rise quickly, and a few weeks later, there was another call, this one for a basement fire just around the corner. By the time firefighters arrived, Lipski recalled, smoke was pouring out of the house. When his chief rushed in the back door toward the blaze, Lipski followed behind. They knocked down the fire using five-gallon water pumps, common tools of the trade at the time. He learned quickly about the courage needed to work as a firefighter and the risks you take while doing so.

There’ve been many other pressure-filled situations since then. Civil unrest. People trapped in high-rise buildings. And in February 2020, Lipski and his team were among the first on the scene during the mass shooting at Molson Coors.

It’s not a job for everyone, Lipski readily admits, but one that he and other firefighters on his staff were born to do. 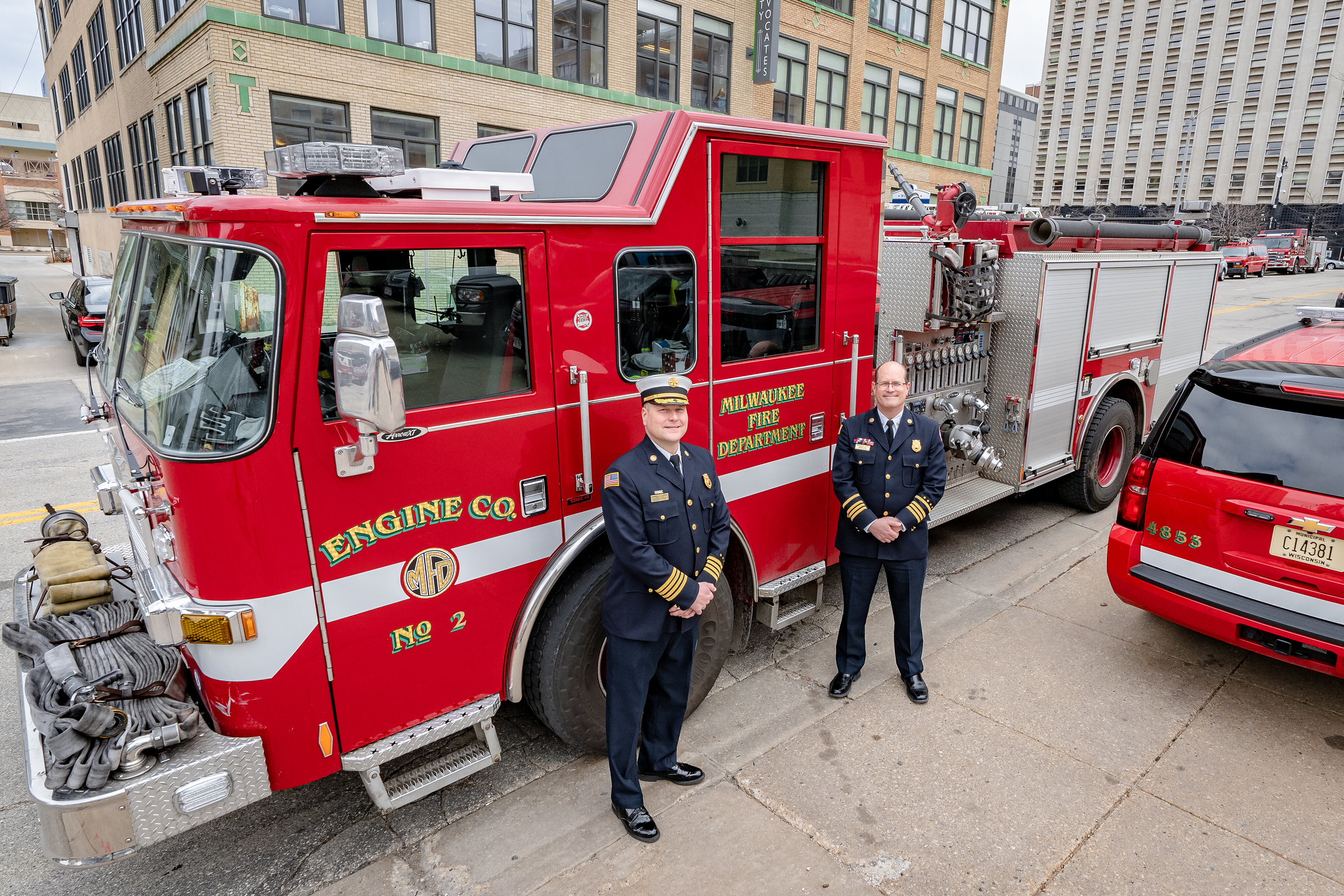 Taking charge during a tumultuous time

Lipski served on an interim basis after former Chief Mark Rohlfing retired in October and was sworn in as chief this month. To say he took over the department during a difficult time would be an understatement.

“The workload is through the roof,” Lipski said during a virtual community meeting in January. The COVID-19 pandemic presented a number of challenges as did the impact of seven fire station closures since 2018.

Firefighters, like police, have been responding to an unprecedented number of murders, drug overdose deaths and deadly accidents caused by reckless driving on top of fires and other emergencies.

“Resources declined, but calls for help have not been declining,” Lipski said during the community meeting.

Still, in the face of adversity, Lipski said his team has risen to the challenge.

The workload is still heavy, Lipski said, but he thinks things have plateaued.

“The physical and psychological and emotional fatigue and the pressure is wearing guys down,” Lipski said. “Nobody signed up for this pace.”

Along with burnout and a shortage in local ambulance services, there are other lingering issues the chief seeks to address.

One of them is increasing diversity within his department, which is made up of 797 staff members (73 percent white, 15 percent Black, 9 percent Hispanic, 1 percent Asian, 1 percent Indian). Men comprise 90 percent of the total staff.

“I will tell you that the numbers people are upset about are true,” Lipski said. “We have to be truly invested in making the fire department representative of the city.”

Lipski is part of a committee of local leaders working to make that happen.

Milwaukee Municipal Court Judge Derek Mosley, who first met Lipski nine years ago, is part of that group. He said he received a call from Lipski shortly after he was named interim chief that convinced him he was the right man for the job.

“He said: ‘I want to make sure that every kid who lives in Milwaukee, no matter what side of town or their economic status . . . see firefighters that look like them and that they believe they can become one, too.”

“When you see it, you have an idea that you can be it,” said Mosley, who commended Lipski for appointing Sharon Purifoy as the first African American female deputy fire chief in the city’s history in December.

Nikki Purvis, chief equity officer in the city’s Office of Equity and Inclusion. said she first met Lipski in 2019 during the planning for the Democratic National Convention. She describes him as a passionate individual who cares about the city and advancing racial equity.

“There are areas for improvement, and he has been vocal about those opportunities,” she said.  “I’m excited to see how Chief Lipski  will lead and to be part of the process of diversifying the fire department.”

Although achieving that diversity is not a quick process, Lipski believes his department and others are making strides.

“We’re running out of chances to get it right, but I feel like we’re closer now than ever,” Lipski said.