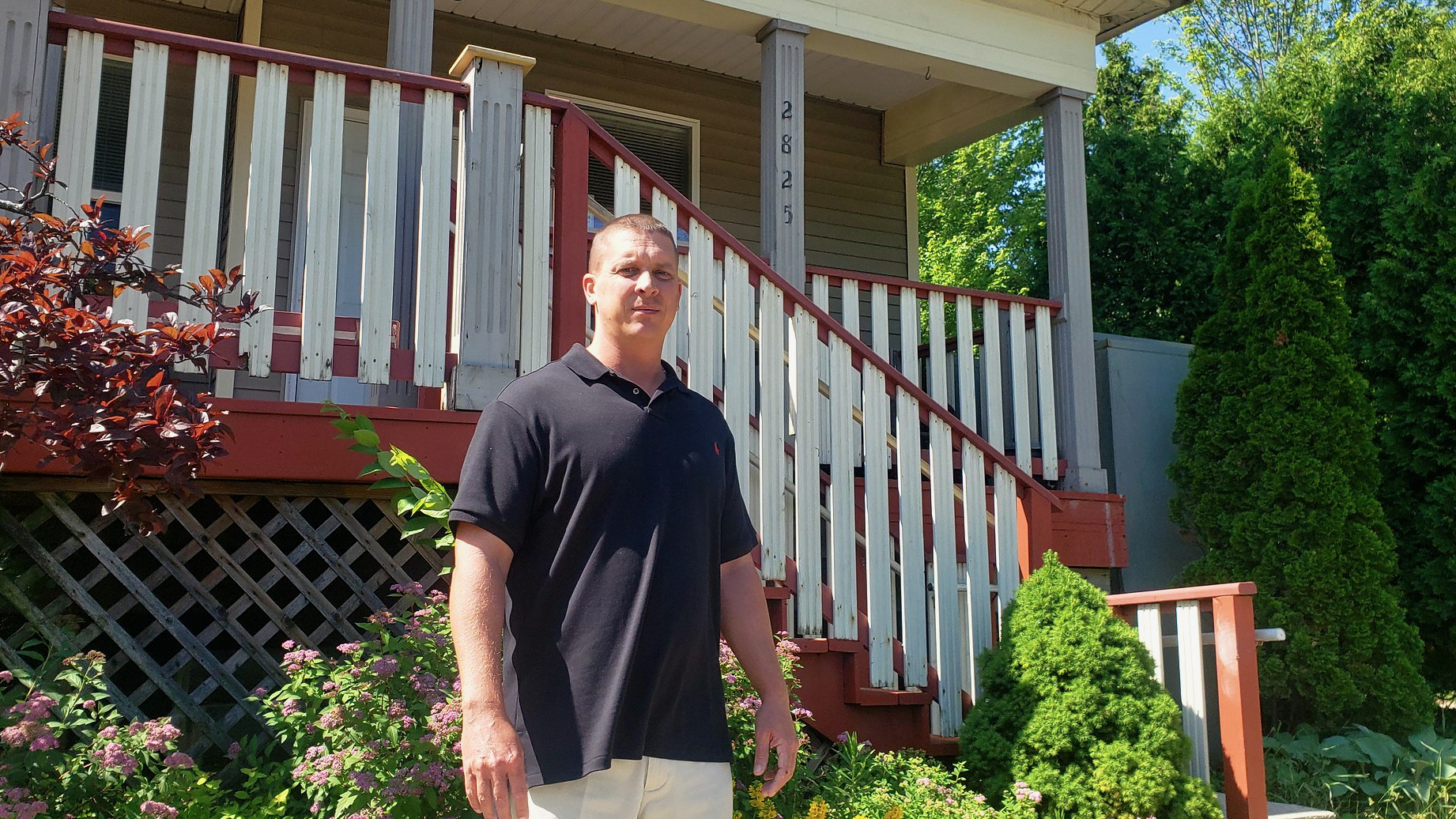 Jason Dobson, director of programs and facilities at Serenity Inns, graduated from the program in 2011. (Photo by Edgar Mendez)

Kj Bell takes his recovery from drug addiction one step at a time.

“I wake up and decide that I’m not going to use that day,” he said. “When the end of the day comes, I’m grateful that I didn’t.”

Raised on Milwaukee’s North Side, Bell, 37, said he used alcohol and weed as a teenager but kept it under control. After one of his best friends was murdered, he started to drink more but still didn’t see it as a problem. When his mother died in 2014, he started using prescription opioids. Three years ago, he turned to heroin.

“By then I knew I had a major problem, but I didn’t know what to do or how to stop,” Bell said. “It was hell.”

Bell ended up in detox, where he learned of Serenity Inns, a safe place for men to recover from drugs or alcohol addictions. He entered treatment there and has been clean now for nearly a year. Although his recovery has been far from easy, Bell said, he knows he’s one of the fortunate ones. He found help before he came across a fatal dose of heroin, fentanyl or another drug. For more than 200 individuals so far this year in Milwaukee, that has not been the case.

From Jan. 1 to June 28, there were 207 confirmed drug overdose deaths, with 80 cases still pending, according to Karen Domagalski, operations manager for the Milwaukee County Medical Examiner’s Office. Among the cases still being investigated are nine deaths that occurred over the weekend, she said. During the same time period last year, there were 287 drug overdose deaths, which suggests that this year’s grim pace is mirroring last year’s record high.

Nearly half of this year’s victims (104) were white, while 82 were Black. Fourteen Hispanics, three Native Americans, two Asian/Pacific Islanders, one multiracial individual and one Eastern Indian individual also died. The drug overdose victims resided in all reaches of the city and suburbs, although the largest number, 22, called the 53204 ZIP code area on Milwaukee’s South Side home. The area that lost the second most victims (16) was 53208, which encompasses neighborhoods on the Near West Side and North Side. Nine victims were classified as homeless. More than three-fourths (77 percent) were men.

According to the U.S. Centers for Disease Control and Prevention, for every fatal drug overdose, there are many more that are nonfatal. But the mixture of fentanyl, a synthetic opioid that can kill in trace amounts, with other drugs, has increased the likelihood and number of fatal overdoses in Milwaukee and across the country.

Unfortunately, the risk of dying of a drug overdose is not enough of a deterrent to quit, said Jason Dobson, director of programs and facilities at Serenity Inns, located on North 28th and West Brown streets. He said when it comes to addiction, logic goes out the window.

“They know they’re playing Russian roulette,” he said. “But . . . none of that matters, and they’re going to take that chance.”

Finding help is crucial to survival, he said. That’s a challenge in Milwaukee, where the need for treatment outpaces availability. When one of 12 beds open up at Serenity, a free program that is privately funded through grants and donations and supported by volunteers, a call to detox will fill that spot in 15 minutes, Dobson said.

Bell arrived at Serenity in early September and said he struggled to adjust to structure of the program: daily meetings, a curfew and living with strangers.

“It was rough, but looking back it was what I needed,” he said.

Dobson said new patients can’t work or have phones, and they must follow other strict guidelines during the first stage of the program.

“It gives them time to focus on themselves and have no distractions while they go through treatment,” he said.

Everyone’s treatment plan is individualized, he said, while their motivation to quit is personal as well.

“It’s really whatever message they give themselves to convince themselves that they are done,” said Dobson, who graduated from the program at Serenity in 2011.

Eventually, the men can find work and save money while still receiving treatment. After seven months, the men transition into their own homes or to Serenity’s alumni house, which was purchased four years ago to house program graduates. They can remain engaged in programs for 18 months.

“The longer you keep them engaged in the recovery process, the better the outcome is,” said Dobson, adding that the recovery rate at Serenity is around 50%.

Bell graduated from the program and now lives at the alumni house. He said he enjoys the increased freedom and also the support and opportunity to live in an environment that is different from his old one.

“I regained my self-esteem, dignity and my confidence and being able to handle situations without getting high,” he said. “I’m able to become a part of my own kids’ life and to reunite with friends and family. My life got better in every way.”