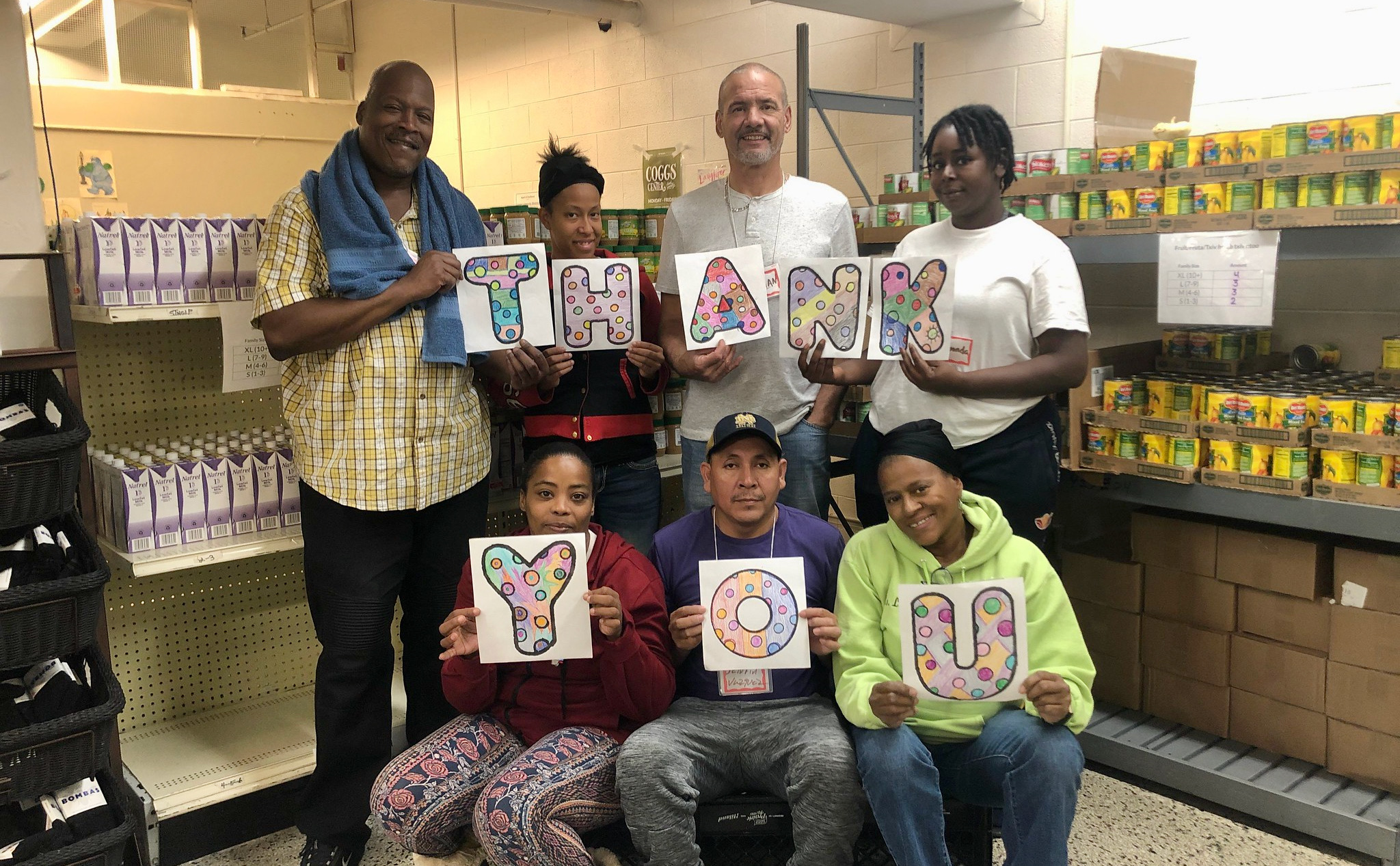 Volunteers at Friedens show their appreciation for clients. Across its four locations, Friedens served over 36,000 meals in 2020 despite having to close one of its locations in March due to COVID-19. (Photo provided by Friendens Food Pantries)

Ten years ago, Andre Pirtle was working with youth and volunteering with the food pantry at his local YMCA. For him, the job became a refuge from his life: His father had spent most of Andre’s life in prison; his mother had developed cancer; and he was trying to help make ends meet.

That “guy” was Pastor Max Ramsey. Ramsey was working at Friedens’ food pantry at Despensa de la Paz on the South Side. Pirtle did not know it at the time, but Ramsey was about to change his life.

“Within three minutes of talking, [Ramsey] was like ‘I think God is telling me to talk to you some more,’ ” Pirtle remembered. “So we met at Church’s Chicken, the most stereotypical place you could meet, and had a conversation that changed my life.”

Pirtle is now 30 years old and has been working at the Despensa de la Paz pantry, at 1615 S. 22nd St., for 10 years. What keeps him coming back is what motivates seemingly everyone who works in the pantry: In a world of chaos, individualism and struggle, Friedens is a haven of peace, camaraderie and nourishment.

In an orientation for new volunteers in early May, Ramsey set the tone for the day right away.

“This is not a charity. You are not above anyone here. You are neighbors helping neighbors. Friends helping friends.”

Service in the city

Across its four locations, Friedens served over 36,600 meals in 2020, even with the Coggs Center closing in March because of the pandemic. The pantry helped people living in the 53204 and 53215 ZIP codes on the South Side and 53223, 53224 and 53225 on the Northwest Side, according to Executive Director Sophia Torrijos.

Beyond providing boxes of food for clients, Friedens also offers other services such as food delivery for those over 60 in certain ZIP codes and cooking demonstrations on its YouTube page. Volunteers can also connect clients with resources to help with other needs not directly related to food, such as housing and health care.

Though Torrijos said that Friedens’ data shows that government assistance has helped her clients stay afloat, she worries what will happen when that aid runs out.

“My fear is that a majority of families will not be bouncing back to normal when [the COVID-19 pandemic] is over,” she said.

Since he arrived at Despensa de la Paz, or just “Despensa” as long-time volunteers call it, Pirtle said he has seen many changes in the surrounding Muskego Way neighborhood.

“This is a transient neighborhood, and the culture of the pantry changes with it. If you go outside right now,” where food is distributed, “you can hear five different languages from people with different cultures, values, languages and food tastes,” he said.

Based on client feedback, the pantry has switched from canned beans to dry beans and from broccoli to kale. It also works with local farmers and even grows its own lettuce in the basement.

Pirtle has even learned to love new foods as well.

Meri Murray, who lived in the neighborhood and has been volunteering for about as long as Pirtle, originally got involved because her granddaughter raved about Pirtle’s youth group at Despensa.

On Saturdays when the pantry is open, you can find her buzzing from one end of the pantry to the other, checking in with clients, coordinating food distribution and organizing volunteers.

“I do everything here except intake, but that’s only because I don’t like working on computers,” Murray said, laughing. “Both food and non-food, I just love it here.”

Cory Dixon, a frequent client who lives in the Kinnickinnic River Parkway area, said he’s been coming to Despensa for about 10 years for groceries but also for help with finding housing and filling out health care applications.

Even though there are food pantries closer to where he lives, Dixon said the camaraderie he feels at Despensa is what keeps him coming back.

“I consider them family,” Dixon said. “Everything I was told about this place has been proven true. They bend over backwards to help you with anything.”

In addition to its location at Despensa de la Paz, Friedens operates three other pantries at Hope House (located at 209 W. Orchard St.) Zion Rock (10230 W. Fond Du lac Ave.) and Coggs Center, which is located at 1220 W. Vliet St. but currently closed until the county reopens the building. You can find an updated list of location hours here.

Torrijos said 82 percent of Friedens clients rent, with less than 4 percent owning their home. About 12 percent are “extremely housing insecure and/or homeless.” Additionally, only 39 percent use a vehicle, with the others relying on hitching rides, taking the bus or walking to pantry locations.