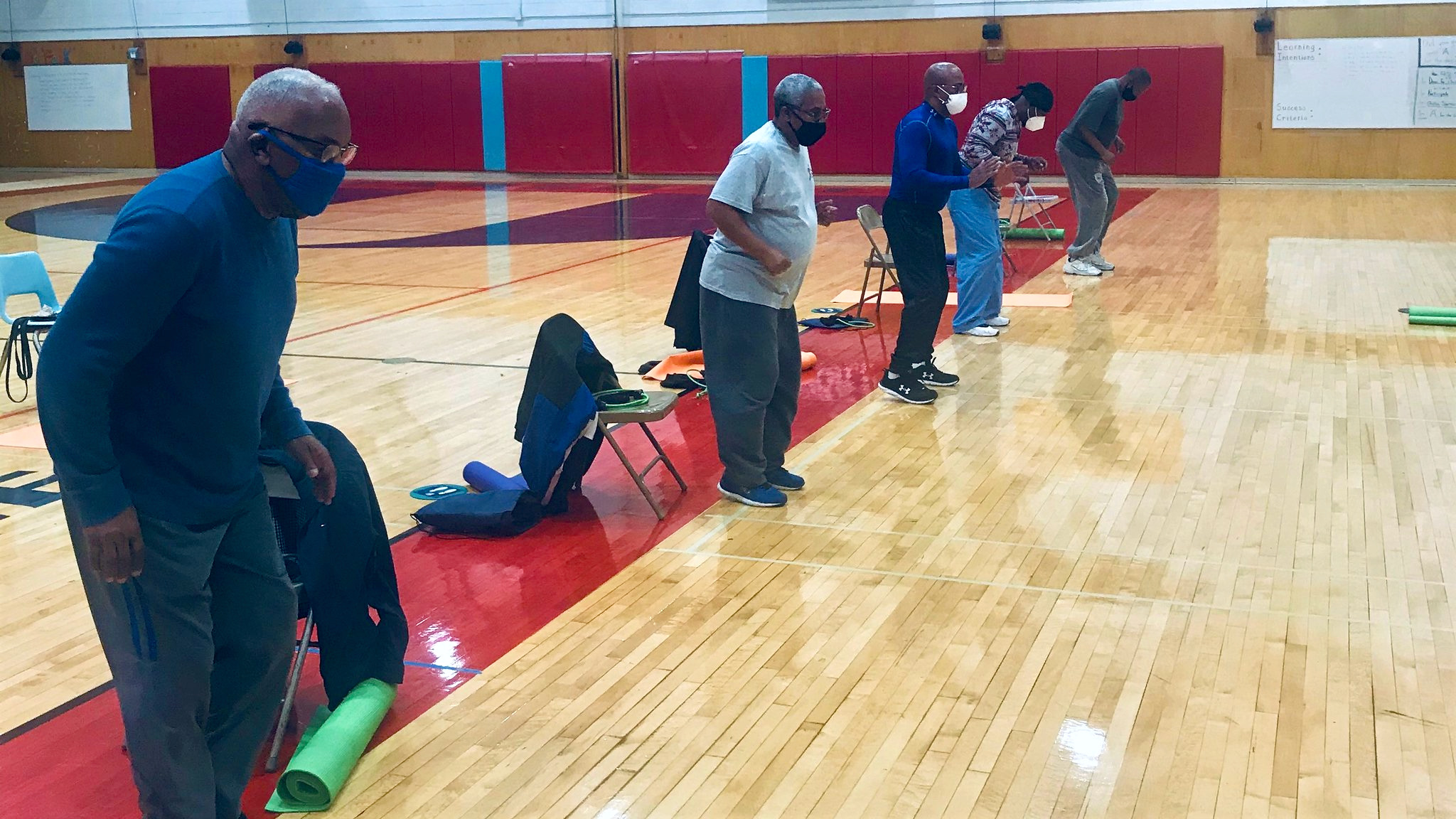 After six years on dialysis, he was able to get on the list for a transplant. The wait was nearly over.

“That was my main focus, because I was trying to stay alive,” Dozier said. “But you know the old saying: ‘God works in strange ways.’”

During a physical examination during the process, Dozier had “a ton of bricks” dropped on him. He was diagnosed with prostate cancer.

After months of treatment and operations, Dozier began the long road to recovery and learning to live with a new challenge.

It wasn’t easy, but he didn’t have to do it alone.

Dozier was approached by Tina Johnson, a community program coordinator with the Medical College of Wisconsin, about joining Men Moving Forward, a program aimed at improving cancer outcomes for Black men. For 16 weeks, Dozier would learn about lifestyle changes to help him recover from the disease, including physical exercise and making changes to his diet.

But perhaps, most importantly, he was introduced to eight other prostate cancer survivors. Dozier said the participants bonded over their trials and their strengths.

“It was incredible to see how many issues we shared,” Dozier said.

He said that the participants grew close during the program , and they shared messages of encouragement while holding each other accountable for workouts and nutrition.

“We became a village,” Dozier said.

Dr. Melinda Stolley, associate director of prevention and control at MCW’s Cancer Center and lead researcher of Men Moving Forward, said the program was started in 2019 in hopes of reaching those most affected by prostate cancer in Milwaukee: Black men.

Black men are 60% more likely to be diagnosed with prostate cancer than their white counterparts. In Milwaukee, maps made by MCW’s Kirsten Beyer revealed a high incidence of cancer and a high mortality rate in predominantly Black neighborhoods.

Because of the disparity, the program is aimed specifically at Black men. The groups usually number from 10 ton15 at a time. Twice a week, men come together to work out and have conversations about their health and lives in recovery.

Participants in the program have their body composition, or the amount of muscle and fat in the body, measured before it begins. They also are given blood tests and strength training, Stolley said.

Once they know what muscles to build, the work begins.

Leonard Wilson, owner of Divine Intervention Fitness, curates workout plans for the program that works every muscle unit. Participants exercise for an hour each week before group discussion.

“A lot of the guys are coming at different levels of fitness, so we want to get them really acclimated to the mindset of working out,” Wilson said.

The program also introduces mindfulness, led by Ambrose Wilson-Brown, a Milwaukee-based health and fitness coach. Wilson-Brown said he helps lead brief meditations and breathing exercises that many participants take with them and practice on their own.

“We don’t spend a lot of time on it, but I think the physiological experience of feeling more confident, more relaxed sticks with a lot of the guys,” Wilson-Brown said.

That relaxation can be necessary for another aspect of the program: diet changes.

That can be a challenge for a program aimed at getting men to “eat more plants” and build muscle mass. The program brings in nutritionists like Bridget Wilder to host cooking classes and help the men learn healthy recipes.

Stolley said that doctors and other health care professionals come in and offer advice on topics such as surviving cancer and sexual health. They tailor the services offered to what the participants ask for, she said.

“When you’re in a clinical setting, you feel more intense, intimidated, but they’re sitting in a gym and then the doc is sitting there and it’s usually pretty casual,” Stolley said. “It’s different than sitting on a table in a paper gown.

For Dozier, the environment relaxed him enough to open up and ask important questions.

Since exiting the program, Dozier has become a recruiter for Men Moving Forward. Still working alongside the team, he never misses an opportunity to thank them for their work.

“If I can encourage just one man to come into this program, I’ve done a fantastic thing,” Dozier said. “I’ve created a miracle within someone else.”

The program is currently accepting applicants for October. Those interested in applying can call 414-955-4095 or email mmf@mcw.edu. The program also has a Facebook page. Participants can choose between meeting on Tuesday and Thursday each week or Thursday and Saturday.

Participants must be African American and must be out of treatment for at least six months, or under active surveillance in treatment. The program is free of charge.