You are here: Home / Home / Carousel / NNS Spotlight: ‘Sisterhood is key’: Daughters of Tradition offers a safe space for Indigenous girls
Share this... 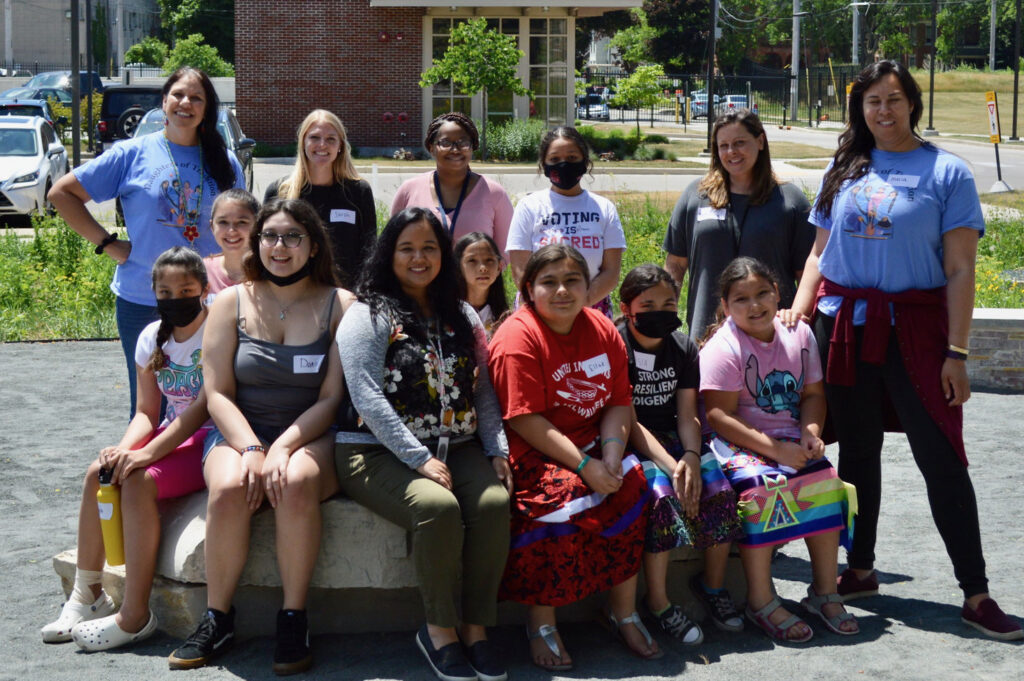 During the summer, Daughters of Tradition gather weekly at the HIR Wellness Institute. This summer, the girls are working on a podcast. (Photo by Ana Martinez-Ortiz)

When Danii Delgado, 13, feels stressed, she does meditation exercises such as flower hands and square breathing. She learned the practices last spring after joining Daughters of Tradition.

“My mom had been looking for us to do after-school activities and she found Daughters of Tradition,” Danii said. “She said, ‘This will be good for you and your sisters.’”

Daughters of Tradition began in 2017 under the HIR Wellness Institute, 3136 W. Kilbourn Ave. The intergenerational group is a sacred space for Indigenous girls ages 3 to 18 where they can share their stories, learn about their cultures and create lasting bonds while promoting social justice.

Currently, Daughters of Tradition has 25 members. It consists of little sisters, big sisters, mentors and ambassadors. During the school year, the group meets on Mondays after school, but during the summer it meets during the day.

Lea Denny, the CEO, founder and clinical director of HIR Wellness Institute, wanted to give Indigenous girls a seat at the table, where they could advocate for themselves and feel empowered.

“When you offer the medicine that is within you to others, it is a gift,” Denny said. 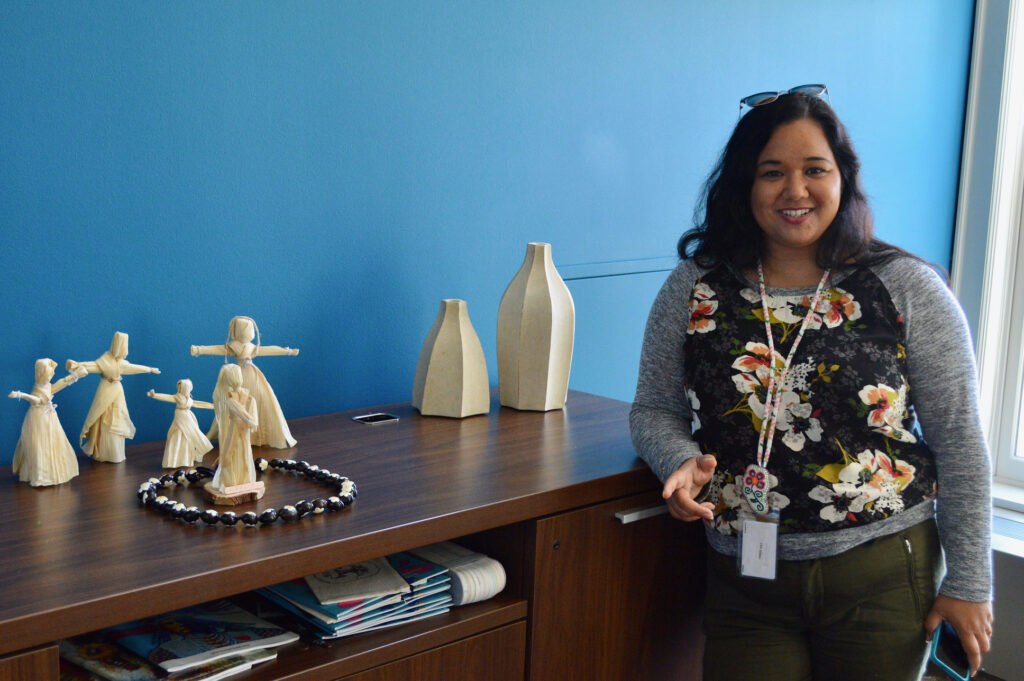 Lea Denny, the CEO and founder of HIR Wellness Institute, says Daughters of Tradition is about empowering Indigenous girls by giving them a voice. (Photo by Ana Martinez-Ortiz)

Everybody has the skills and capacity to take care of each other when the community prioritizes the individual, she said. The group’s healing circles offer an opportunity for participants to express themselves and for the others to show support.

The intergenerational model is key to the group’s success. People learn through mentorship and modeling, Denny said. The little ones go from running around to joining the circle and eventually leading it, she said, while the older ones realize the responsibility they have to the younger ones.

“We work with the girls on building their voice and their empowerment,” Denny said. “The girls learn that their decisions matter; that their ability to make decisions for the whole and to do it collectively starts when they’re three, when they start talking.”

Asia Banda, 11, joined the group for the sisterhood aspect.

“My dad thought it was good for us because I’m the only girl in the house,” Asia said.

“Sisterhood is key in building those positive relationships and for building ourselves,” Malia Chow, a community healer and advocate, said.

Chow officially joined the HIR Wellness Institute two years ago after being a longtime volunteer.

“I think the group is mandatory for the community for Indigenous survival,” Chow said. “I think for all people to survive and thrive, we are going to have to mainstream Indigenous principles and norms.”

Children will make more of an impact than adults, she said. 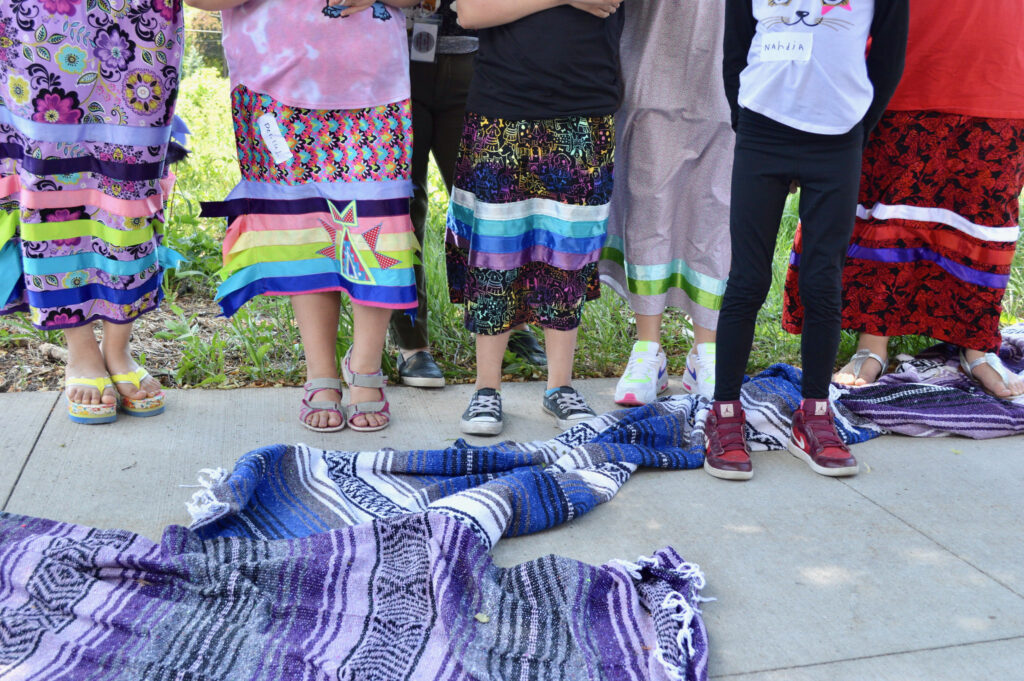 Elena Romo, 14, who has been with the group since it started, enjoys the traditional activities such as beading and making dreamcatchers. Her mom thought it would be good for Elena to join the Daughters of Tradition and learn more about her tribe, the Menominee.

“This group helps me a lot,” Elena said. “Even though I’m going through hard times, sometimes, when I come to this group it helps me to forget about the hard times and make good times.”

“Any of the activities we do, we will bring in a cultural piece,” Chow said. “We’ve done corn husk dolls, which you find that throughout many First Nations tribes and groups of people, and we’ve done lei making, which has a lot of cultural implications in Hawaiian cultures.”

In June, the girls painted rainbows. Rainbows represent Pride Month, Chow said, and in Native Hawaiian culture, they are viewed as pathways to divine spiritual or ancestral guardians.

The group recently started a podcast, “N8V-T,” to help raise funds for a trip to Washington D.C., where the girls hope to meet with national leaders and advocacy groups.

This summer, the girls are interviewing community leaders, and the episodes will air this fall. The outcome is multifold: The girls connect with community advocates and learn the history and tradition of their ancestors while memorializing it.