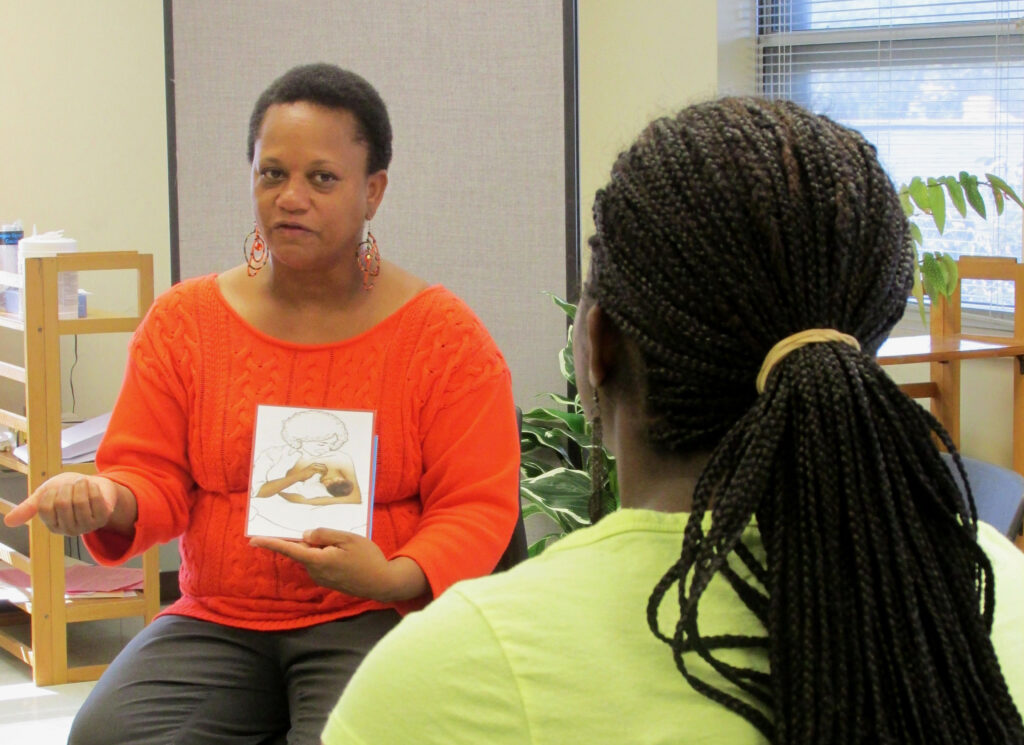 Dalvery Blackwell, founder of the Milwaukee-based African American Breastfeeding Network, says peer counseling programs allow counselors an opportunity to not “put women in a box and define who and what they are.” She’s shown providing maternity advice at the now-closed Marquette Neighborhood Health Center in 2013. (NNS file photo by Kara Cucchiarelli)

After having a baby, mothers face a choice: Will they breastfeed or feed from the bottle?

The difference could be major. In recent studies, breastfeeding was linked to a major reduction in infant mortality. Infants and mothers who breastfeed are also at less risk for a number of health conditions, including asthma and diabetes.

In Milwaukee, peer support counselors are available to provide guidance. The counselors offer their own experiences and guidance from breastfeeding in a culturally competent way.

Peer support programs through the Women, Infants and Children, or WIC, program are available throughout the city, and Milwaukee’s WIC program provides counseling for 821 women annually. Grant funding for the program is now over $74,000, an increase of 50% from 2020.

Natalie Alcaraz, WIC program manager for the Milwaukee Health Department, said the increased funding will go to hiring additional staff and increasing community outreach. The team will have four peer counselors by the end of the year and has a stated goal to reach mothers at Ascension St. Joseph hospital.

WIC will also host Baby Cafés for mothers in the near future, with the goal of holding two a month, said Erica Olivier, maternal and child health director for the Milwaukee Health Department. The Baby Cafes are events where mothers can come and have their questions answered about maternal health.

Peer counselors also operate out of different organizations in the community, all with the common goal of reflecting the communities they serve.

Dalvery Blackwell, founder of the Milwaukee-based African American Breastfeeding Network, said peer counseling programs are important because they allow counselors an opportunity to not “put women in a box and define who and what they are.”

Blackwell said that her organization intentionally hires women from the community.

“They bring their own lived experiences, cultural backgrounds and nuances,” Blackwell said. “They see determinants and assets in their own community.”

Blackwell said the breastfeeding initiation rate for Black women was about 58%, about 12% lower than all other women, including those in the Latinx population. She believes that for many Black women, this is because of a lack of positive examples.

“When you don’t see it, you don’t believe it can happen for you,” Blackwell said. “I’ve heard women say, ‘That’s not for me, that’s for the woman who’s going to stay at home with her kids.’”

Blackwell said she noticed that Black women were uncomfortable exposing their breasts to non-Black women in clinical settings during her own time working with WIC. She also said Black women were more likely to have jobs in workplaces that were not family-friendly or accommodating for breastfeeding.

“It lands differently from someone you might see at church,” Christie said.