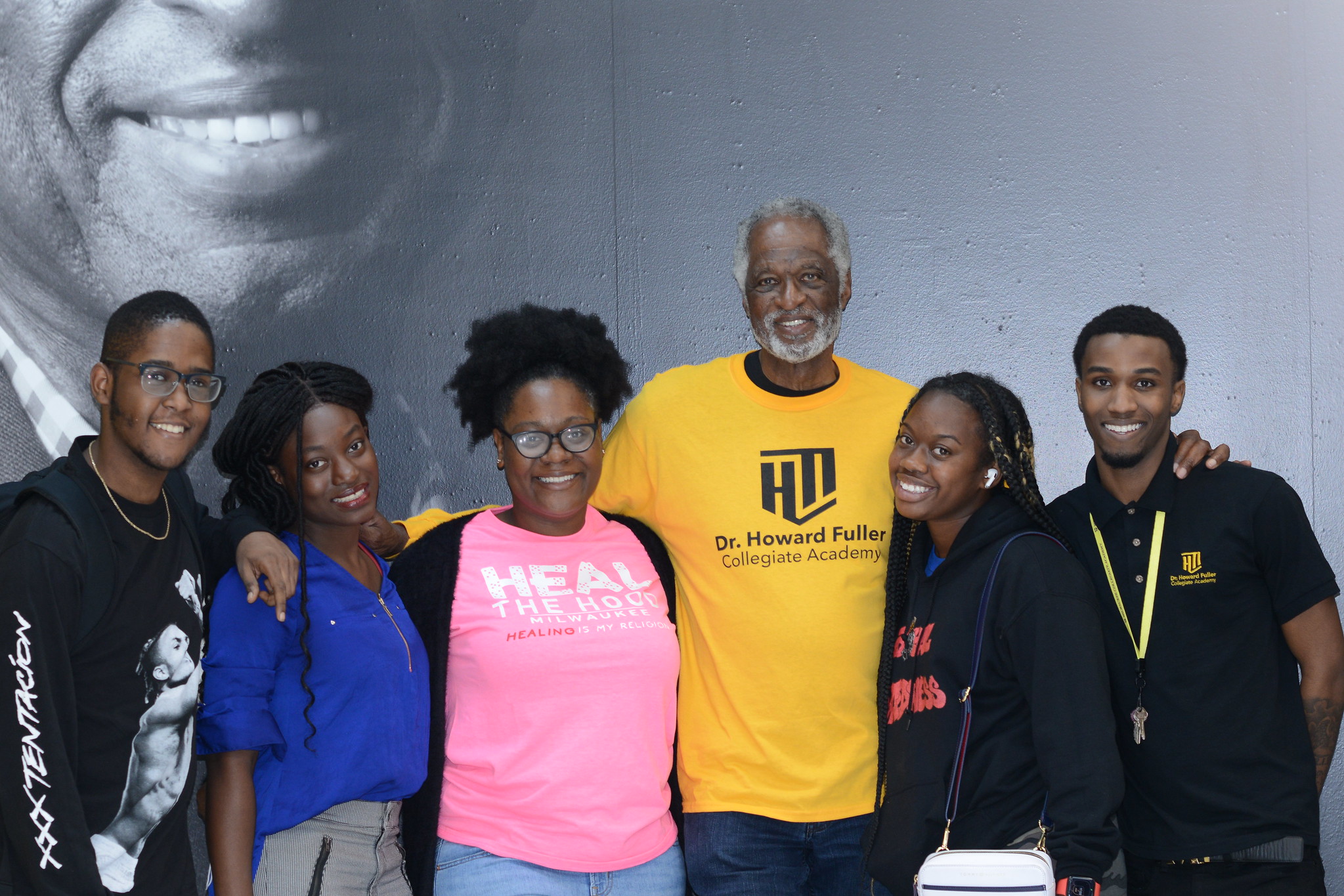 Dr. Howard Fuller, in his own words, is a man of many contradictions.

He loves the city of Milwaukee, although he’s angry about the conditions it provides for Black people. He sees the glass as half empty, but through his life’s work, he has tried to see it filled.

Yet through it all, he persists. He wakes up each morning to attack the day. He sows seeds for the next generation to step up and keep fighting.

“People have asked me about my greatest achievement. I say, ‘Hope is still out there.’”

Fuller, 80, retired from a long career as an academic and administrator at Marquette University a little over a year ago, though you wouldn’t know it if you followed him around today. Spending time at the school that bears his name, he’s easy to pick out in a crowd. He’s about a head taller than most students, and the only person that tall walking around with gray hair.

In his life, Fuller has been a civil rights activist, world traveler, educator and scholar. Now, he’s best described as a mentor. He hangs around the school talking to students and learning their passions, their struggles and their dreams.

Fuller consults his own life and examines his own influences when he passes on his wisdom: the lessons he learned in history, in economic reality, in travel and in the power of a simple speech.

Fuller was in the crowd for Malcolm X’s famous “The Ballot or the Bullet” speech on April 3, 1964. After that day, he’s never taken a speaking engagement for granted.

“Whenever I get up to speak, I never take it lightly,” Fuller said. “You never know who’s sitting in the crowd listening or what impact you’ll have on people’s lives.”

Fuller would go on to found the Malcolm X. Liberation University in Durham, North Carolina, in 1969. The university was an experimental school to further education based on the Black Power movement. It shut its doors because of funding constraints.

This was one of Fuller’s first forays into education. He’d go on to become the superintendent of Milwaukee Public Schools and a nationally recognized supporter for school choice. 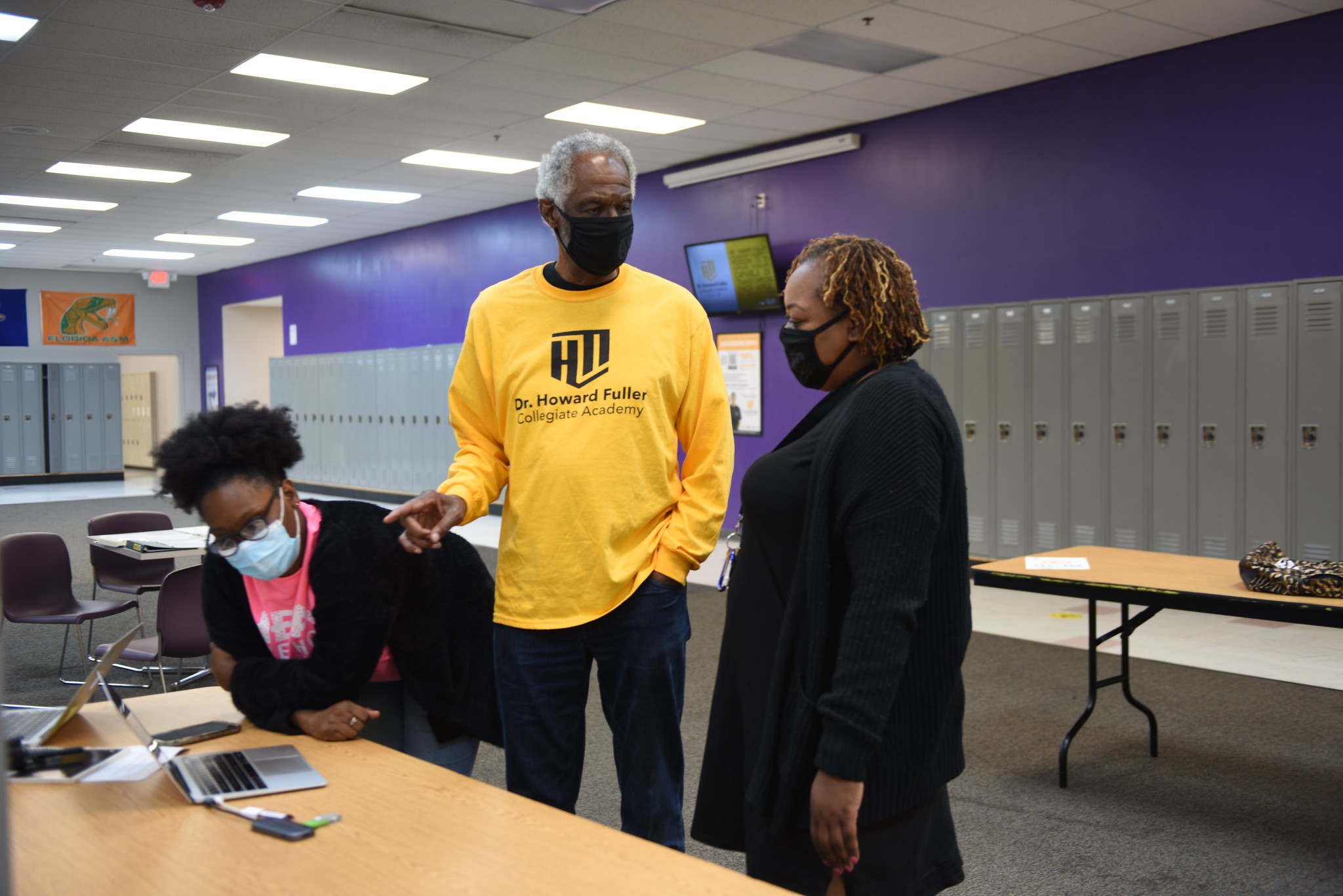 You don’t have to go far to find someone who was inspired by one of Fuller’s speeches. Judith Parker, principal at the Fuller academy, said he was the reason she sought a job at the school.

Parker, who was living in Chicago at the time, said that Fuller was the keynote speaker at a summit when she heard him talk about being compassionate while having high expectations of students.

Parker said he changed her outlook on teaching. She regularly checks in with students and tries to give them a learning environment that responds to their needs.

“It starts from the top,” Parker said. “It starts with Dr. Fuller. He doesn’t just tell you to learn, he’s going to stand beside you and teach you.”

That teaching extends beyond the classroom, and even sometimes beyond state lines.

Taleavia Cole, an alum that mentors at the school as a student success coach, said Fuller took her under his wing as a freshman. Now she’s a poet, a law school hopeful and an activist.

She’s also the sister of Alvin Cole, the teenager who was shot and killed by Wauwatosa police officer Joseph Mensah at Mayfair Mall.

Cole graduated from Jackson State this year, while taking on a role as an activist protesting her brother’s death. She credits Fuller with her education and for inspiring her willingness to speak up and speak truth. She gladly says she’s been “getting into some good trouble” because of lessons she learned at the Fuller academy.

“The love is here,” Cole said. “The culture remains.” It’s all because of Fuller, she said.

During her freshman year, Fuller promised to take Cole to Times Square, a promise he’d make good on two years later. Along with other students, Fuller and Cole traveled to New York, New Jersey and New Orleans before she was out of school.

“It showed us a different part of the world,” Cole said.

Sherlean Roberts, a student success coach and alum, is a sophomore at Marquette studying political science on a full ride. She said she wouldn’t be there without Fuller.

“He has so many job titles and he spends his time with us,” Roberts said.

For as much as he believes in the school and its students, there are still things Fuller would like to see change. Looking back proudly on 15 graduating classes at the school, Fuller wants to see conditions shift that will allow all students to succeed.

“Economic reality is critical,” Fuller said. “I’ve fought for education my whole life and will continue to fight for it … but if you were to ask me what’s the more important thing between a change in the curriculum and the minimum wage to be 15 bucks, I’d say the minimum wage.”

Fuller said lacking necessary resources can make education 50 times harder for students. That leads to another contradiction for him.

As far as legacy is concerned, Fuller laughs when you ask him about it.

He’ll never get used to people calling him a “legend” or “iconic,” either.

“I just see myself as a regular dude who had opportunity because of what I did and what other people did for me,” Fuller said. “Because of that, I just have this responsibility to give back everything that I possibly can to change the lives of these students and the people that I’ve interacted with over the years.”

For Fuller, a quote from Mary McLeod Bethune, educator, civil rights activist and a direct descendant of slaves, resonates: “The drums of Africa still beat in my heart. They will not let me rest while there is a single Negro boy or girl without a chance to prove his or her worth.”

“There’s no way that I can fulfill or satisfy anything like that,” Fuller said. “My soul is still not at rest. I’ll never retire from trying to make a difference. And clearly, there’s a humongous amount of work yet to be done.”