You are here: Home / Home / Carousel / ‘It’s about us as a whole’: Milwaukee’s Black Panthers say they are here to serve and protect the community
Share this... 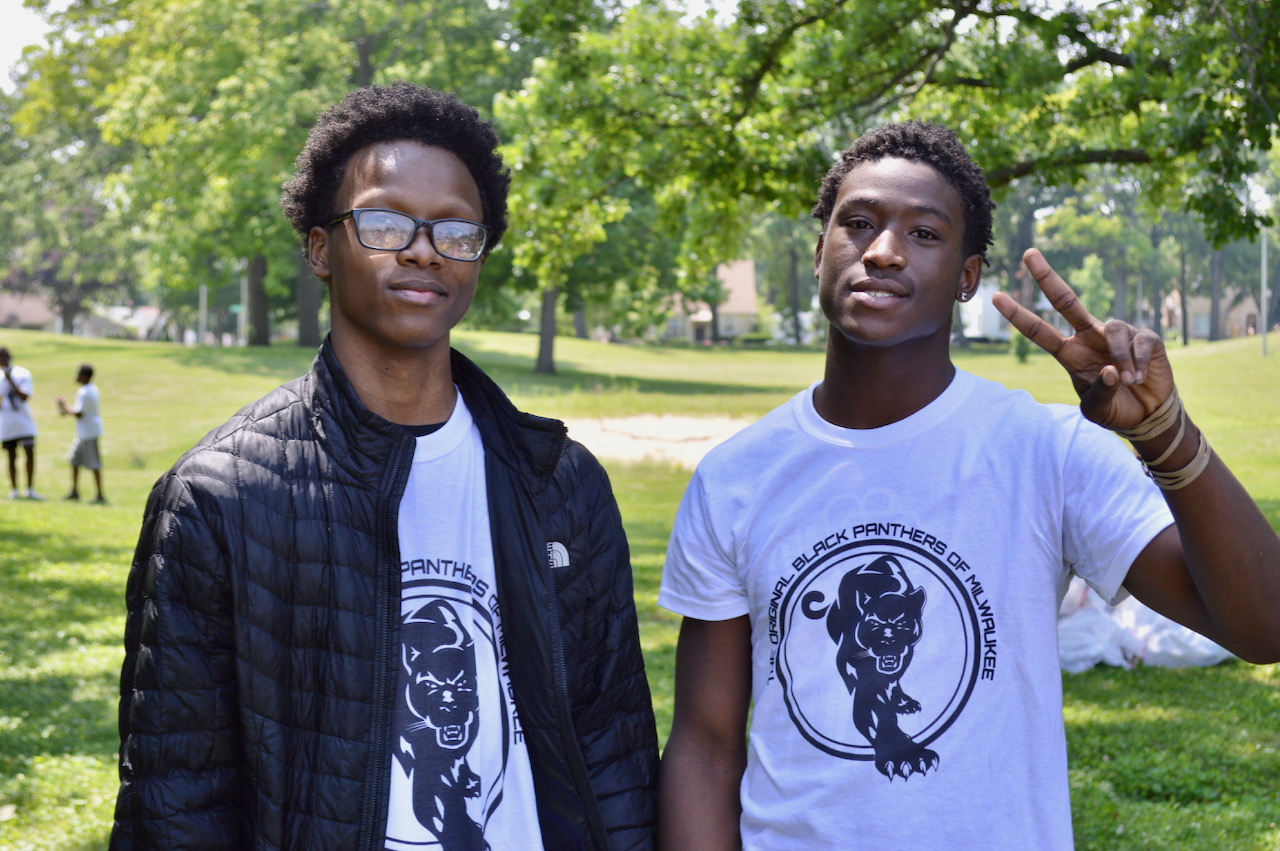 Tatreal Liggins (left) and Tamarus Liggins-Lee say the Black Panther organization is about doing positive work for the community. (Photo by Ana Martinez-Ortiz)

When Darryl Farmer, who goes by the name King Rick, was in elementary school, he watched Father James Groppi lead an open housing march past his school. He had waited all day for the group to arrive, and when it did, he left school and joined them.

That was the start of the 58-year-old’s involvement with social justice and, eventually, the Black Panther Party of Milwaukee.

During the late ’60s and ’70s, the group patrolled the community, taught classes on Black history, fed children through its breakfast program and performed other acts of service.

Growing up, King Rick was a Black Panther cub. When he became a Panther, he served as the bodyguard for Michael McGee, a former alderman and Milwaukee’s Black Panther Party commander. Although Milwaukee’s chapter eventually disbanded, approximately seven years ago, the elders decided to revive it and named King Rick as the leader. 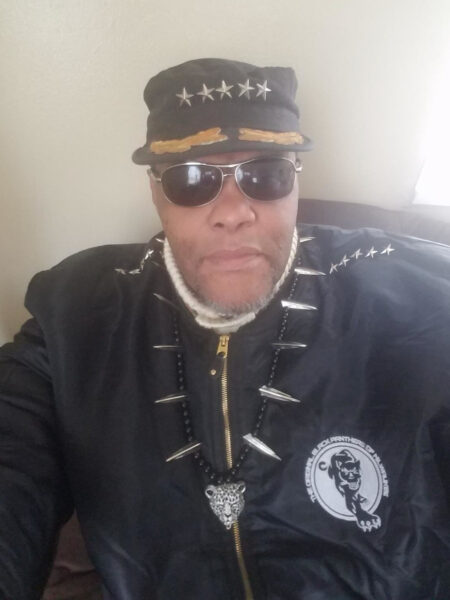 “We protect community, but we also provide for the community,” King Rick says. (Photo provided by King Rick)

“We don’t ask permission or make appointments, we just show up,” King Rick said. “That’s what makes us controversial.”

Since its revival, the group has focused its efforts on helping the community. It conducts giveaways for food, shoes, book bags and turkeys; it organizes neighborhood cleanups for Panther Cubs; and it takes women out for Mother’s Day, among other activities.

“We started these programs here because we wanted to give back to the community,” King Rick said. “We wanted to show them that the original Black Panthers are still here for the community.”

Through his involvement in events such as the annual neighborhood cleanup, Tatreal has learned that there are people who want to better Milwaukee.

“I discovered more people than I thought are willing to get hands-on to show how far they’re willing to go to make our community a better place,” he said.

Fred Rogers, who goes by the name Neighborhood, is a longtime Black Panther. As a young man, he joined the commandos and later the militia. When the Milwaukee chapter regrouped, King Rick reached out to him.

Neighborhood, 59, looks forward to all the Black Panthers’ events.

“It’s a pleasure to do all of them,” he said, “because somebody is going to be happy, and the stuff is much needed.”

There is a misconception that the Black Panther organization is racist or a hate group, King Rick said. It’s against racism, oppression, injustice and inequality. The group has no problem shutting down meetings at City Hall or confronting racist restaurants or stores, but its aim isn’t to do harm.

Anyone can call the Black Panthers at any time if they need help, King Rick said. 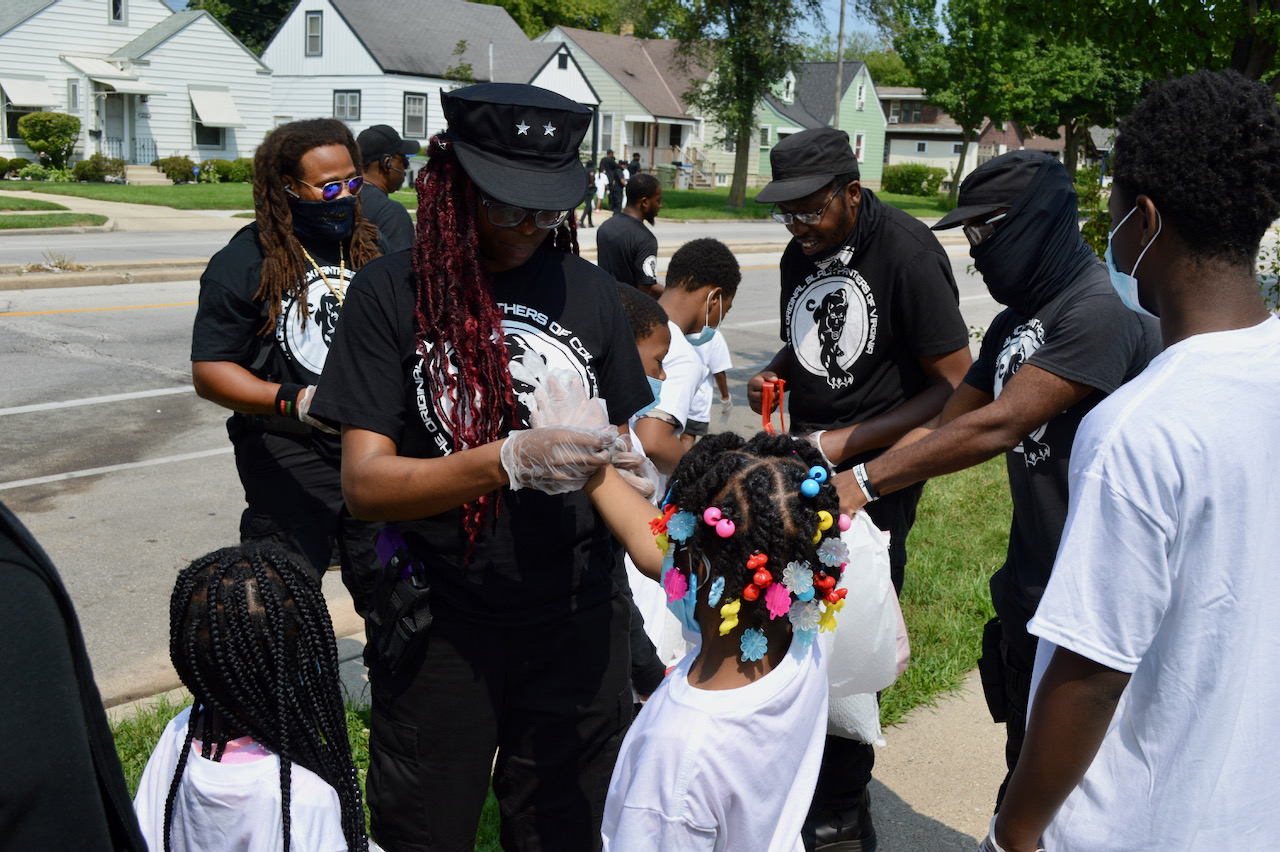 During the pandemic, the group provided pizzas to first responders and hospitals, including Aurora Sinai Medical Center, 945 N. 12th St. Recently, it helped a young woman who was assaulted at a gas station by an employee. At the woman’s request, the group went to the gas station and spoke with the manager. One of the members filmed the exchange and posted it to social media. The next day, the owner of the gas station reached out to King Rick and later terminated the employee.

“We protect community, but we also provide for the community,” King Rick said. “If someone is a detriment, I don’t care what color you are, if you are a detriment, we’re going to come after you.”

King Rick, who stands 6 feet 7 inches, is known as “the biggest panther in the jungle.”

“It is a responsibility that was bestowed upon me by people in the community,” King Rick said.

And one that is inspiring the next generation.

Tamarus Liggins-Lee, 15, is in his second year as a Black Panther cub.

“I want Black Panthers to be all around to show our Black kings and queens what they do,” Tamarus said. “It’s positive. When you come here, you feel like you know the people already. I feel like we’re all family over here. There’s love, there’s good energy and all that.”

For more information on the Black Panthers or receive help, individuals can call 414-336-0221.