You are here: Home / Community Voices / OPINION: Efforts to suppress voting are on the rise. Here’s how we got here. And here’s how we can stop them.
Share this... 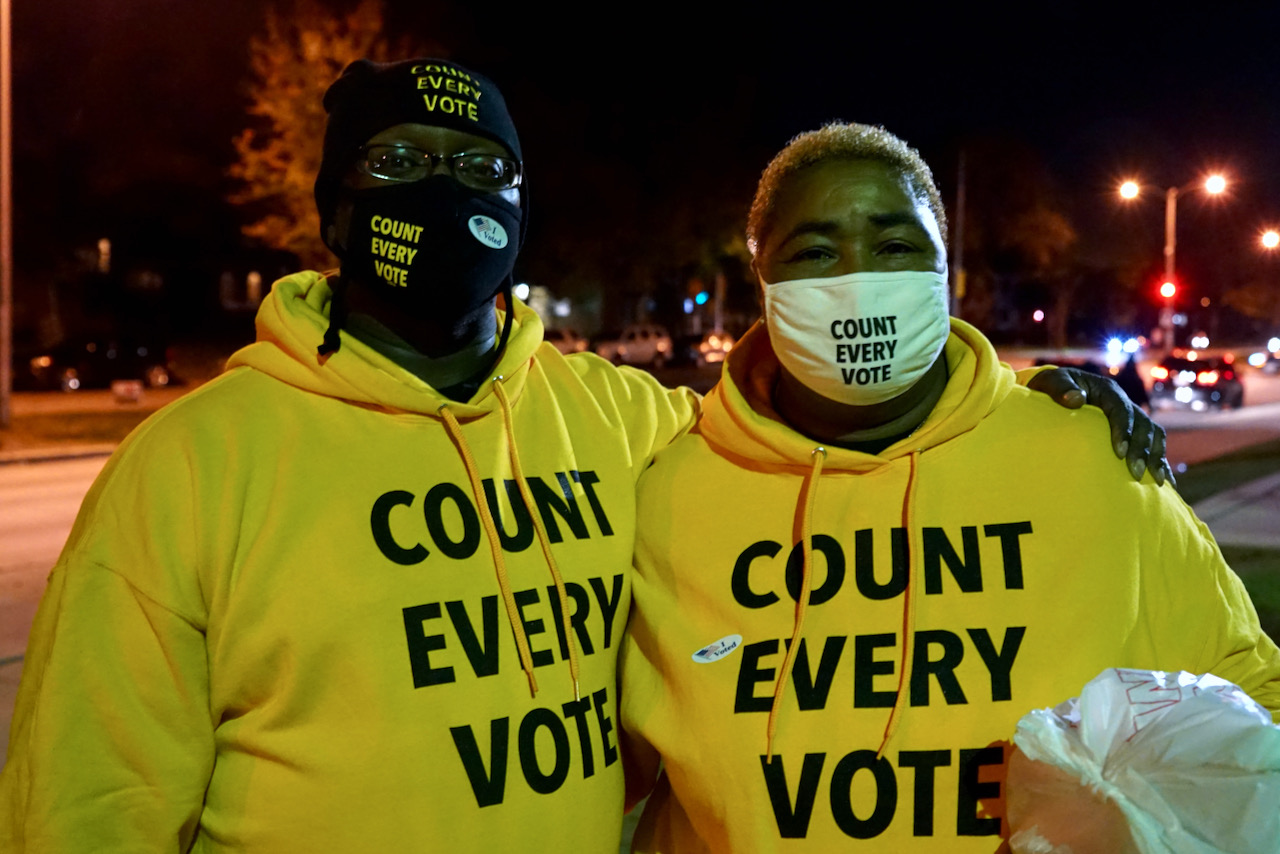 Alex Coleman and Rhonda Oliver were at Washington High School, a neighborhood polling place in the Sherman Park neighborhood, on Election Day 2020. (Photo by Adam Carr)

Last month marked the 58th anniversary of the March on Washington, when Dr. Martin Luther King Jr. delivered his “I Have a Dream” speech. Thousands gathered to protest the wave of legislation that many have argued suppress voter rights, particularly for Black and brown voters.

In 2021 alone, over 400 voter suppression bills have been proposed in state legislatures, most often Republican-led.

How do we find ourselves here again?

Shelby v. Holder and the dismantling of voting protections

The Voting Rights Act of 1965 is considered one of the most successful pieces of federal legislation in the history of the country. And at the center of the Voting Rights Act’s success were Sections 4 and 5, which required jurisdictions to “preclear” changes with the Department of Justice before implementing them based on their history of race-based voter discrimination. Preclearance was massively successful at improving voting access in these “covered” jurisdictions.

In 2013, however, the Supreme Court struck down the coverage formula in Shelby County v. Holder. In a 5-4 decision, the court reasoned that the coverage formula was out of date – despite Congress’s determination that it was still needed. The ruling rendered the Section 5 preclearance system effectively inoperable. Writing for the majority, Chief Justice John Roberts argued that systemic racism and discrimination in voting practices were “based on 40-year-old facts” with “no logical relation to the present day.” Local officials could now close polls, purge voters or change voting laws/dates without the permission of the federal government.

The decision in Shelby County v. Holder opened the floodgates to laws restricting voting throughout the United States. And the effects were immediate. Within 24 hours of the ruling, Texas announced that it would implement a strict photo ID law. Two other states, Mississippi and Alabama, also began to enforce photo ID laws that had previously been barred because of federal preclearance. After nearly 50 years of growth in minority voter turnout, 2013 saw a dip in Black and brown voters.

The 2020 elections and efforts to suppress voters

Fueled by Donald Trump’s big lie that the 2020 election was stolen and retaliating against Democratic victories in November, Republicans intensified their campaign to restrict access to the ballot.

According to the Brennan Center: “In a backlash to 2020’s historic voter turnout, and under the pretense of responding to baseless and racist allegations of voter fraud and election irregularities, state lawmakers have introduced a startling number of bills to curb the vote.”

The new onslaught of voter suppression tactics can be grouped into three types:

A long line of research by political scientists has documented how increasing voting options would increase turnout, but until 2019, many of those suggestions were implemented in a limited fashion. As a result of COVID-19 and concerns about in-person voting and social-distancing requirements, pandemic-related changes to voting options included expanded absentee-voting, vote-by-mail, additional polling locations and longer early-voting periods.

And these worked — voter turnout hit a historic high in 2020.

The current restrictive proposals are efforts to restrict these expanded voting option, and almost half target vote-by-mail. In addition, a number of states are adding ID or witness requirements to obtain an absentee ballot (Arizona, George and Pennsylvania, for example). Florida wants to limit the use of ballot boxes, in addition to making it harder to vote absentee. And Georgia legislators have suggested restricting Sunday early voting, the traditional day that African American churches mobilize voters with “souls to the polls” events.

Central to the passage of the Voting Rights Act in 1965 was concerns about how poll taxes and literacy tests were used to restrict the eligibility of racial minority voters. In 2020, these poll taxes come in the form of voter ID and new requirements for “proof of citizenship” (Texas). Additionally, legislators in several states, including Georgia and Arizona, want to eliminate or prohibit automatic voter registration, and several legislatures are considering eliminating same-day voter registration.

The most insidious suppression tactics include those in which state legislatures attempt to usurp sovereignty straight from their constituents. Republican-held state legislatures have passed bills that give lawmakers more power over the vote by stripping secretaries of state of their power, asserting control over election boards and creating easier methods to overturn election results.

While we have seen many of these tactics deployed since Shelby v Holder, the sharp rise in their use suggests that we have reached a turning point in our democracy. If these laws are enacted, state legislatures dominated by partisans could effectively determine which party controls Congress every 10 years via gerrymandering, and effectively nullify voter preferences.

Voter suppression and election outcomes: The case of Wisconsin

After the 2016 election, registered voters in Milwaukee County and Madison’s Dane County were surveyed about why they didn’t cast a ballot. Eleven percent cited the voter ID law and said they didn’t have an acceptable ID; of those, more than half said the law was the “main reason” they didn’t vote. That finding implies that from 12,000 to 23,000 registered voters in Madison and Milwaukee—and as many as 45,000 statewide—were deterred from voting by the ID law.

According to this study: “It is very probable that between the photo ID law and the changes to voter registration, enough people were prevented from voting to have changed the outcome of the presidential election in Wisconsin.”

The run-up to the 2020 election was also fraught with voter restrictions, such as reduced early-voting periods, often days before voting would start. Judge Frank Easterbrook of the U.S. Court of Appeals for the Seventh Circuit in Chicago wrote that the voting restrictions were acceptable because Republicans who controlled the legislature were not discriminating against voters based on race, but based on their political affiliation. He relied on a 2019 U.S. Supreme Court ruling concluding that partisan manipulation of electoral districts was acceptable.

President Joe Biden’s narrow win in Wisconsin then ushered in a new flurry of voting restrictions, including altering the absentee voting process, limiting the location of drop-boxes and imposing greater burdens on clerks.

Two weeks ago, Gov. Tony Evers vetoed six Republican-backed bills that would change election laws in Wisconsin, stating the bills would add “unnecessary and damaging hurdles for Wisconsinites to participate in our democracy.”

The House of Representatives passed HR 1 (known as the For the People Act) in July. The Brennan Center has analyzed each of the restrictive voting bills pending in the states and concludes HR1would block many of them.

The John Lewis Voting Rights Advancement Act would modernize the Voting Rights Act and restore the requirement that certain states and localities with a history of voting discrimination get prior federal approval — or “preclearance” — of any changes to their voting rules and practices to make sure that they are not discriminatory. It would also require all jurisdictions in the country to submit for preclearance any “covered practices,” meaning those practices, such as strict voter ID laws and polling place closures in communities of color, that have typically been implemented for a discriminatory purpose or have had discriminatory effects.

And many states are expanding voting options, automating voter registration and minimizing obstacles to vote.

What can you do?

VOTE! In EVERY election!

Talk to others about voting, and help dispel misunderstanding.

Support your local nonpartisan organizations working to protect your voter rights like the League of Women Voters and ACLU of Wisconsin.

Paru Shah is an associate professor in the department of political science at the University of Wisconsin–Milwaukee.