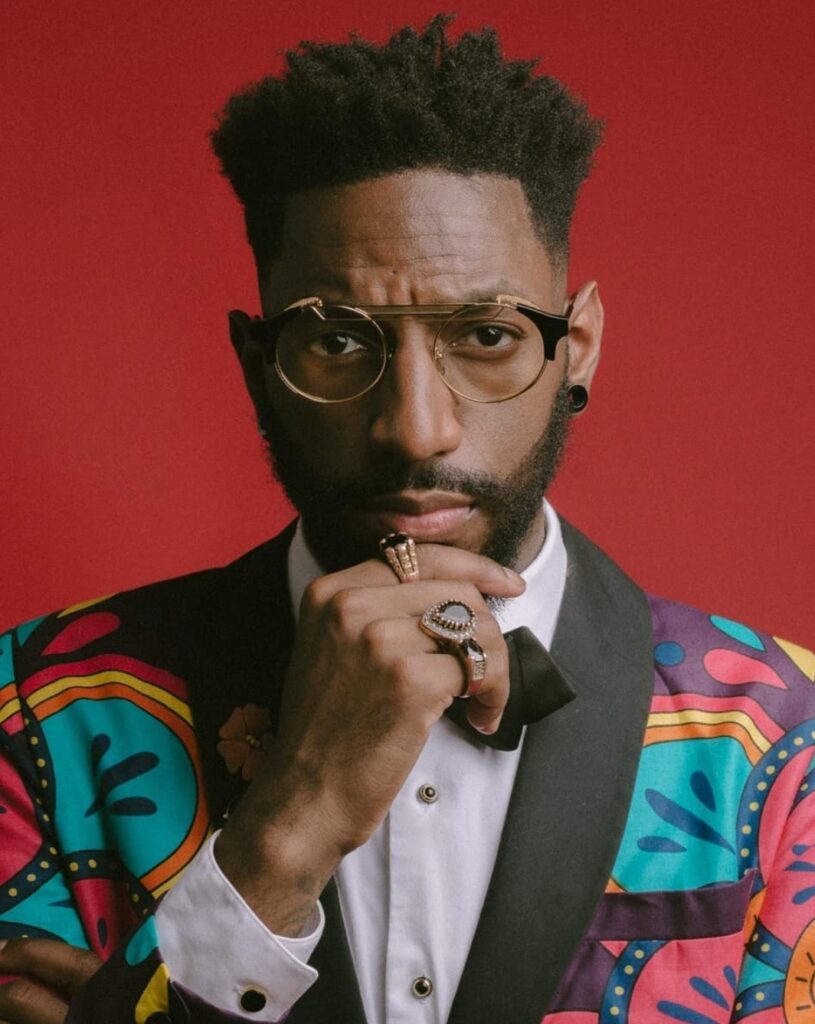 The second play in First Stage’s fall 2021 Amplify –BIPOC Short Play Series will be STEP KIDS, a new one-act musical by Tyrone L. Robinson and Postell Pringle with orchestrations by Wilkie Ferguson and drums by Deonte Malique Ellis. The production will be directed and choreographed by Christopher Gilbert, a popular Milwaukee dancer, choreographer and First Stage Theater Academy Teaching Artist. Christopher will be making his directorial debut with this production. In STEP KIDS, a group of seemingly unconnected high school students find common ground in the most unlikely of places – the audition for their school’s competitive step dance team. As the students become unified through the power of rhythm and dance, they experience the joy of finding their tribe in this energetic performance. The Amplify series is sponsored by Children’s Wisconsin. This project is also supported in part by a grant from the Milwaukee Arts Board and the Wisconsin Arts Board with funds from the State of Wisconsin. Suggested for families with young people ages 10+.

Director/Choreographer Christopher Gilbert had this to say about the Amplify production he is directing: “STEP KIDS is about a group of kids who represent different pockets of the city, but in general society – some LGBT, some disabled. It’s their moment to be seen – they’ve always felt that they have been stepped over, so now it’s their time to step up and be seen. It’s about highlighting their greatness, which is just as unique as anyone else’s. Nobody can be you on their best day and even you on your worst day!”

STEP KIDS is free to stream on demand on First Stage’s YouTube channel and premieres on Monday, October 11 at 7 p.m. It will stream October 11 – December 5, 2021. For more information about STEP KIDS, please go to: firststage.org/events-tickets/2021-22-season/amplify-bipoc-short-play-series/

The Amplify series first launched in the spring of 2021 and begins its second season this fall. In this new series, three short plays have been created by Black, Indigenous and People of Color (BIPOC) playwrights that center on the young person’s point of view, amplifying the voices of these artists and young people throughout the Milwaukee community.

First Stage has had a long history of age-appropriate casting and of centering its work on the young person’s point of view. Understanding the power of connection that young people feel when they see themselves and their stories on stage, the organization is excited to continue this series featuring newly commissioned work from noted BIPOC playwrights and directors. First Stage’s commitment to commissioning work by Black, Indigenous and People of Color whose voices offer the organization an opportunity to expand its artistic horizons and develop its audience’s perspective.

Artistic Director Jeff Frank commented on the next installment of the Amplify series: “I am thrilled that First Stage is able to offer the second season of our Amplify series. Each of these productions features the work of a national playwright using their voice to lift those of the young people of Milwaukee. Connecting these remarkable writers with our amazing young people and witnessing them all working together to create powerful plays that speak with authenticity has been an amazing experience. We can’t wait to share their work with First Stage audiences.”

Postell Pringle (Composer) is a seasoned 20-year veteran of the stage, the lens, the pen and the microphone . . . and he’s just warming up. A critically-acclaimed performance artist, Pos takes a multi-disciplined approach to art. Based solely on an urge to fuse a love of stagecraft, visual and oral storytelling, folklore and hip hop music. Just as David Chang flips a southeast Asian noodle dish using NYC street cart ingredients, Pos is dedicated to creating new works by breathing life into a dusty, old cannon. The result: a transportive, historically rich, delicious trip. Family-style. No reservations necessary. He’s an actor, performer, rapper, music producer, playwright and occasional director and choreographer. He hails from Decatur, GA. He resides in ‘do or die’ Bed-Stuy, Brooklyn NY. postellpringle.com

Wilkie Ferguson (Orchestrator) is a Broadway veteran, a native of Miami, Florida and a graduate of New World School of the Arts. Having studied mathematics at Morehouse College, and classical piano performance at Eastman School of Music, his first job after college was assistant director/piano accompanist/music theory instructor on the faculty of the Boys’ Choir of Harlem, where he had the privilege of working with some of the most talented young voices imaginable. In addition to being a classical pianist, Ferguson has also worked as a professional singer, dancer and actor. He was a part of the original broadway casts of the Tony Award- winning THE GERSHWINS’ PORGY AND BESS, MOTOWN THE MUSICAL and WONDERLAND and has toured with IN THE HEIGHTS, HAIRSPRAY and DREAMGIRLS. As a film composer, Wilkie’s work can be heard in Parrotheads, the documentary of Jimmy Buffet’s fan club, currently the number one documentary on iTunes. Wilkie is the creator and orchestrator of Take On Me and Hip Hop Musicals. Take On Me is an original ’80s pop musical revue, featuring jazz arrangements and a live big band, which has enjoyed critical acclaim and sold out runs in Los Angeles and South Florida. Visit takeonmemusical.com for more info.

Christopher Gilbert (Director/Choreographer) is a First Stage Theater Academy Teacher, Director and Choreographer. He is from the north side of Milwaukee and began teaching his own dance classes by age 14. His first introduction to the industry was acting and dancing with the Nickelodeon show Yo Gabba Gabba which helped instill in him a new perspective on life. After touring and working on the TV show in L.A., he transitioned back to Milwaukee so he could invest back into the community. In 2013 Christopher went full time as an educator, musician and motivational speaker. Since then, he has choreographed for Black Arts MKE, First Stage and Wisconsin Lottery. He has also coached the Grand Dancers for the Milwaukee Bucks and collaborated with the Milwaukee Brewers. For the past four years, he has been directing his own motivational dance show called Elevation at Dominican High School.

Deonte Malique Ellis (Drummer) (aka Malique Lion), born in Milwaukee, is a young up-and-coming percussionist. He is setting an example for his peers and the next generation, by trailblazing the Milwaukee Music Scene. Deonte currently is a part of a few ensembles and bands as well as teaching, all while maintaining his own business ventures. To name a few: Milwaukee Bucks Drumline, coach of his high school drumline at Riverside and drummer for bands “Nwa Na Agbe” and “The Urbanites,” to name a few.

Jeff Frank (Artistic Director) is recognized as one of the top directors in the field with an expertise in developing new work for theater for young audiences. He holds a BFA in Theater from the University of Wisconsin-Whitewater and an MFA in Child Drama from the University of Utah. Having served as First Stage’s Education and Academy Director from 1996 – 2003 and as First Stage’s Artistic Director since February 2003, Jeff remains committed to the power of theater to transform lives and is forever thankful to call First Stage home.

A one-act musical by Tyrone L. Robinson and Postell Pringle

A group of seemingly unconnected high school students find common ground in the most unlikely of places – the audition for their school’s competitive step dance team. As the students become unified through the power of rhythm and dance, experience the joy of finding your tribe in this energetic performance. Suggested for families with young people ages 10+.

Additional productions in the 2021/22 Amplify – BIPOC Short Play Series are:

HOW TO ACTUALLY GRADUATE IN A VIRTUAL WORLD

When Milwaukee High announces that graduation will be virtual, TT gathers friends to come up with a way to make the ceremony special. As they weigh their options – and battle invisibility, hopelessness and indifference – we learn how the pandemic affected them all. Is an achievement an achievement if it goes unacknowledged? Tune in and consider this question in this provocative short play. Suggested for families with young people ages 12+. The production can be viewed here: youtube.com/watch?v=kJTSDnxCROA&t=117s

THE TALE OF LA LLRONA AS TOLD BY CONSUELO CHAVEZ

Disappointed that a thunderstorm has stopped them from their traditional trick or treating, six middle-schoolers huddle together in a basement on what might be the last time they are together to celebrate All Hallow’s Eve. To pass the time, they share some of their favorite ghost stories . . . but are they just stories? Suggested for families with young people ages 12+. Warning – the performance includes blackouts, loud noises and scary moments.

To reserve tickets for in-person performances or for additional information, please go to: firststage.org/events-tickets/2021-22-season/amplify-bipoc-short-play-series/ or call (414) 267-2961.

First Stage is one of the nation’s leading theaters for young people and families. First Stage touches hearts, engages minds and transforms lives by creating extraordinary theater experiences through professional theater productions that inspire, enlighten and entertain. Its Theater Academy, the nation’s largest high-impact theater training program for young people, fosters life skills through stage skills and serves nearly 2,000 students each year. As Wisconsin’s leader in arts-integrated education in schools, First Stage’s dynamic Theater in Education programs promote literacy, character building and experiential learning throughout the curriculum, serving over 20,000 students each year. First Stage was selected to participate in the Partners in Education program of the John F. Kennedy Center for the Performing Arts (2012), and was the recipient of the Milwaukee Business Journal’s Eureka Award, recognizing creativity and innovation in business, education and the arts for its Next Steps program for students on the autism spectrum (2013, 2015). First Stage is a member of TYA/USA, the American Alliance for Theatre and Education, the Wisconsin Alliance for Arts Education, Milwaukee Arts Partners and is a cornerstone member of the United Performing Arts Fund (UPAF). firststage.org