You are here: Home / Home / Carousel / Author finds peace in helping others overcome trauma
Share this... 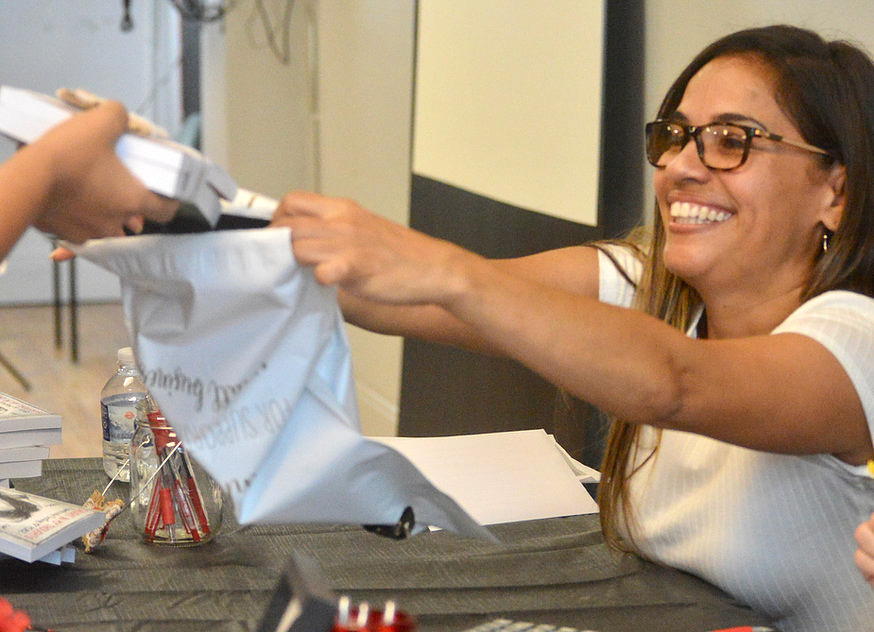 Eileen Alvarado, 50, a youth advocate, author and survivor of trauma, hopes her third book, “Caught in My Thoughts: Fearlessly Finding MY PEACE,” will help others overcome their trauma. (Photo provided by Eileen Alvarado)

For a long time, Eileen Alvarado didn’t want to be seen.

That’s despite working with youths in schools and in the community where she taught them about partner and sexual violence, how to protect themselves and how to address their trauma. She’s even written two books that draw from her own abusive upbringing.

“A lot of my personality wasn’t just being an introvert, it was anxiety of being around people,” she said. “The more I hid from those feelings the more paralyzed I became.“

Struggling, the 50-year-old took time off from her job as a youth advocate at the Milwaukee Center for Children and Youth to focus on her third book, “Caught in My Thoughts: Fearlessly Finding MY PEACE.” Writing that book, which was launched at an event in late August, has now helped her break those shackles, Alvarado said.

It’s a semifictional tale of a princess who undergoes changes while seeking salvation from a prince. The story drew from her traumatic past and how she longed for a prince to save her from her hurt and pain, she said. As she wrote it, she delved deep into her childhood and consciously thought about the situations that made her most anxious. She said she realized then that it was relationships and her fear of rejection that drove her to isolation and fueled her depression.

“The more I understood that, the more it gave me compassion for myself,” Alvarado said. “It wasn’t that I didn’t love myself, it was about overcoming my thoughts that kept me bound and affected my relationships.”

“Her smile lights up the room, but one part of me now realizes that some of her smile was part of her defense mechanism,” she said. “It covered her pain and was her way of battling.”

Velazquez said the book, which is meant for readers of all ages, also helped her understand her own personal life.

“She talks about fear and insecurity and things we walk in our own life,” she said. “We all have experienced some sort of trauma, and if we don’t address it, then it carries over into other parts of our life and even how we interact with our children.”

Alvarado said her goal is to help people begin to unmask those uncomfortable thoughts and to realize they can overcome them.

“The things that go through our mind, feelings of sadness and not wanting to go on in life are real,” she said. “In being emotionally aware and facing those fears there is healing.”

Alvarado has been overwhelmed by the response she’s gotten from her book. A local producer created a short film based on the story. During the launch event, more than 40 books were purchased and donated to teens, and she’s working with a nonprofit to sponsor more free books to distribute to youths.

She also received grant support to start a book club for students at local schools and is using the book and a lesson guide she created to help them open up and talk about their own experiences.

“We discuss the characters and how it relates to them,” Alvarado said. “With it, they’re able to talk about feelings and emotions, boundaries and trauma without feeling intimidated.”

Michele Wink, co-founder and director of Milwaukee Center for Children and Youth, an organization created to fill gaps in services and advocate for young people in need, said that what Alvarado does is extremely brave.

“She does public speaking and does other things even though they give her anxiety because she wants to help people,” said Wink, who allowed her to use some of her work time to write. “Her book, its messages and goals are very compatible with our mission to thrive and not just survive.”

Alvarado, who just released another book, this one featuring poems, said she’s ready to take on her challenges.

“Before I could never be me because I was caught up trying to be someone I thought people would like,” she said. “I’ve been able now to find that peace of mind and find what love was for me.”

You can purchase Alvarado’s third book, “Caught in My Thoughts: Fearlessly Finding MY PEACE” by visiting eileencruzalvarado.com.