You are here: Home / Home / Carousel / Latinx medical students get the word out about COVID-19
Share this... 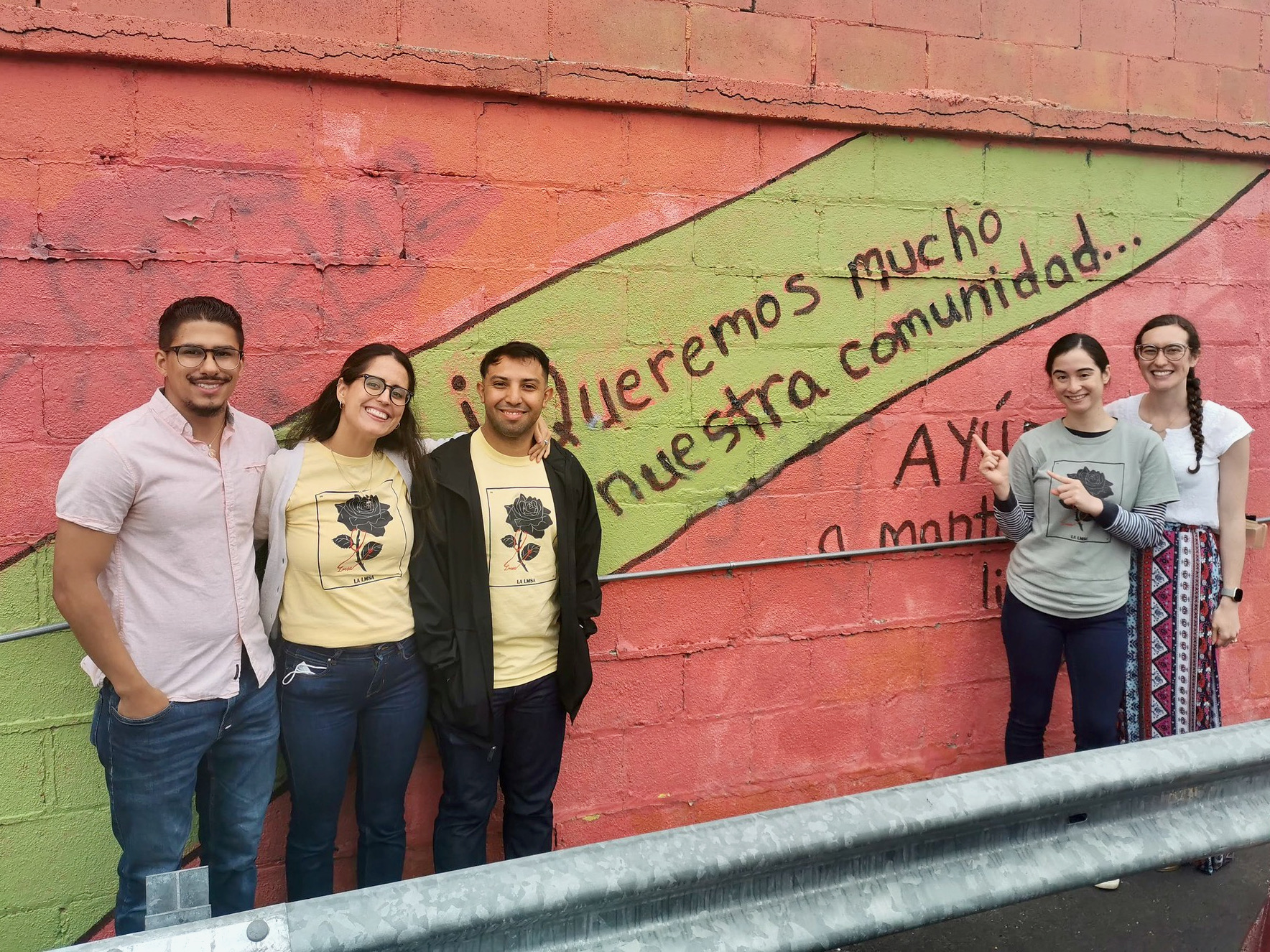 Members of the Latino Medical Student Association pose next to a mural on Milwaukee’s South Side. From left to right: Dr. Christian Hernandez, Raquel Valdes, Cristhian Gutierrez-Huerta, Ana Maria Viteri and Laura Carrillo. (Photo provided by Medical College of Wisconsin)

These Latinx students at the Medical College of Wisconsin want to become doctors for different reasons.

Ana Maria Viteri, co-president of the Latino Medical Student Association, was inspired by her mother, who did community outreach. Viteri, who was born in Ecuador and came to the United States at age 9, said she was motivated to go into medicine because of the disparities she saw in health care for the Latinx community.

Jessie Duarte, another co-president of the student association, which also is called LMSA, grew up in Salt Lake City as the son of Guatemalan immigrants. He often wondered how much easier it would have been for a Latinx doctor to address his family’s health concerns directly.

Now, Viteri and Duarte both seek to make the vision of a healthier community a reality. Their first challenge: COVID-19.

Spurred by disproportionate rates of the virus, the Latino Medical Student Association, a national group with a chapter at the Medical College of Wisconsin, took to the streets on the South Side in late to do outreach about the vaccine and to provide information about COVID-19. The group has 80 members at the college. Viteri and Duarte head the eight-member executive board.

Their first stops were in South Side churches, speaking to congregations about COVID-19. Then they became regular fixtures at festivals and back-to-school fairs. At some events, they saw people walk straight from their table to go get vaccinated elsewhere at the festival.

Milwaukee’s South Side has seen more COVID-19 cases than any other area in the city. The 53215 ZIP code, home to Layton Park and Burnham Park, has seen nearly 12,000 cases, according to data from the Milwaukee Health Department.

The next closest is the 53204 ZIP code, containing Clarke Square and Walker’s Point, with over 7,800 cases, also on the South Side. In Wisconsin, the Latinx population has more cases per 100,000 people than any other racial or ethnic group, according to the Department of Health Services.

The team partnered with the United Community Center, an organization that provides services to the Latinx community on the near South Side, to do outreach and distribute pamphlets that are culturally and linguistically appropriate, Viteri said.

Shary Perez, health research program coordinator at United Community Center, said that the students were instrumental in connecting with the younger generation. Many in the community were hesitant to get the vaccine because they still had a lot of questions about it, Perez said.

Viteri said medical lingo can be complicated even for budding medical students and breaking down advanced terms is crucial for getting the right messages out into the community.

Sometimes using analogies and illustrating medical concepts is more effective than explaining something scientifically, she said.

“They can translate not just into Spanish but also make it more understandable,” Perez said. “It’s important to have a simple conversation and not use big words.”

Viteri said that the group has run across people who were hesitant or flat out refused to get vaccinated. The members stress the importance of listening to their reasoning.

“Science is real, but so is history,” Viteri said. “We have to honor that some people have medical mistrust. But you navigate that through increasing visibility and access to health care.”

Many young people in the community didn’t think they needed the vaccine because they were healthy, Perez said, but having the medical students available to talk about their own experiences with it and the science behind it helped change minds.

‘People were proud of them’

Perez said having the opportunity to communicate with the students one-on-one without having to go to a doctor’s office made all the difference.

“People were proud of them,” Perez said. “They were proud to see Latinos working to get into medicine.”

Viteri stressed the importance of visibility in the community, not just by putting a familiar face to institutions like MCW, but also by helping to inspire the next generation of medical students to step into their shoes. Duarte said the group mentors pre-med students and visits local high schools.

“If I would have been able to see a Latino medical student, I think it would have been more motivating,” Duarte said. “Just being there and answering questions and saying ‘you can do it.’ Of course it’s tough. It’s a long road, but you take it step by step.”

The importance of that representation and cultural competence could make all the difference for a patient. Viteri said dealing with the virus in these communities can be “multifactorial” as residents might be living in multigenerational homes, have other medical conditions and work in jobs that they can’t afford to miss.

Understanding these challenges comes naturally to those living through them.

As far as lessons learned through the outreach, Duarte said being attentive to the community’s concerns is something the group plans to practice as physicians.

“Just take the extra few minutes,” Duarte said. “Never be too good to answer the small questions. They can make a huge difference.”