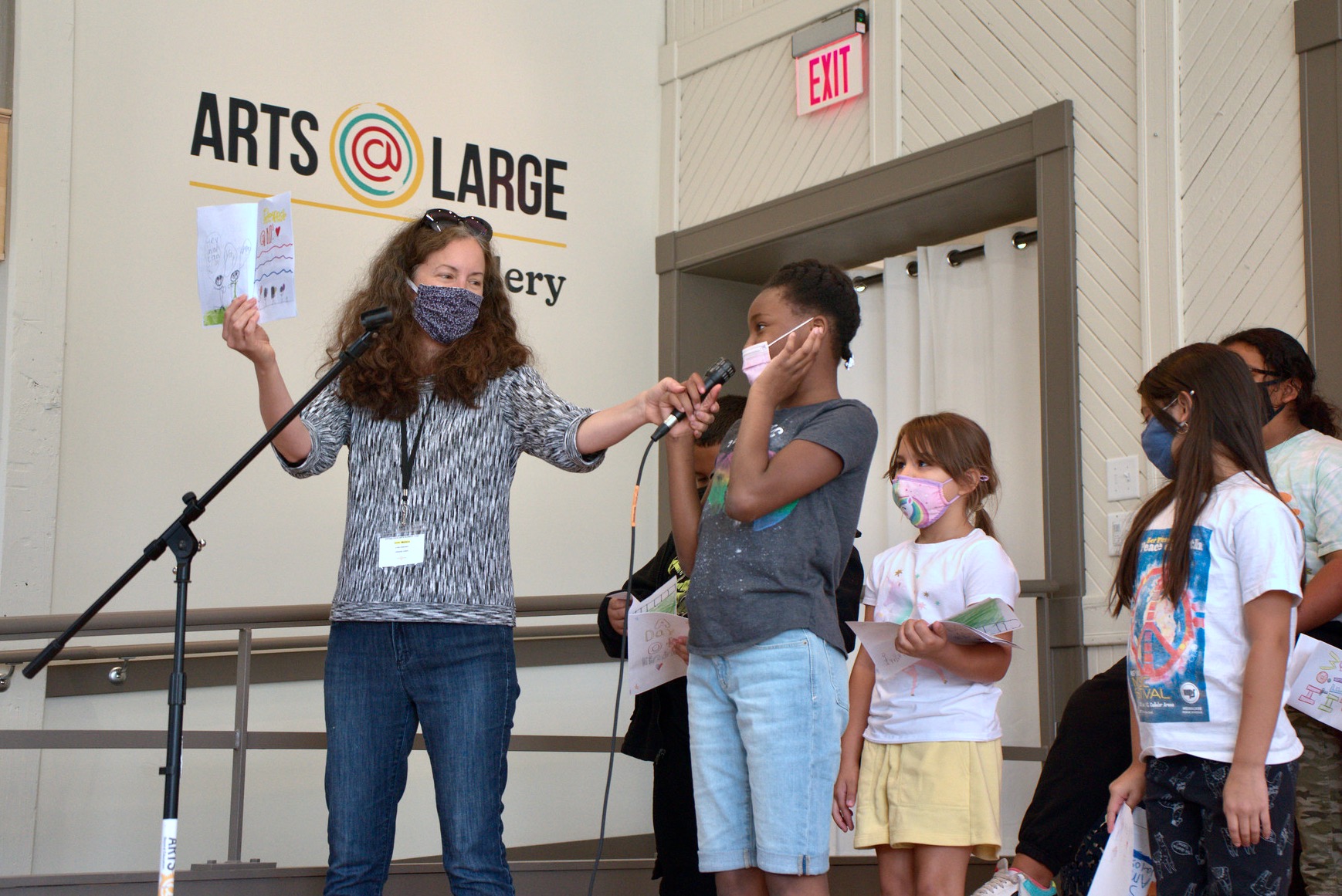 Students perform as part of the A@L Arts Summer Camp. At the camp, artists guide campers through art-making exploration around big idea topics that help them understand how artists respond or build community. (Photo by Sam Woods)

Anessia Johnson has been doing hair since she was in eighth grade and wants to own a salon someday.

You might expect her to be spending her time at salons to learn tricks of the trade, but Johnson, who graduated as valedictorian at The Alliance School of Milwaukee and now attends Fisk University in Tennessee, has spent much of her free time in the Arts @ Large café.

While interning with Arts @ Large, she learned how to do inventory lists and other skills necessary for running a business

“They gave me a little experience on what it’s going to be like to run a business,” she said. “But also these people have given me a place to call home. I know I’ll always have a place here.”

Johnson is not the first person to have her life touched by Arts @ Large. The nonprofit arts education organization is celebrating its 20th anniversary of bringing arts programming and education to Milwaukee’s youths.

Teri Sullivan, co-founder and CEO emeritus of Arts @ Large, will be the first to tell you that the nonprofit has never exactly been flush with cash. This was especially true in 2001, when Sullivan and Kim Abler got a $1 million grant from the U.S. Department of Education, spread out over four years, to supplement arts programming in Milwaukee.

In some contexts, $250,000 per year may be considered a lot of money. But when you’re designing and implementing curricula in over 20 schools across the city, Sullivan and Abler had to make some sacrifices.

“Kim and I were running everything out of our cars during that initial grant and for years after,” Sullivan said.

Sullivan’s and Abler’s job was to help classroom teachers work with music and art teachers to deliver an innovative curriculums, such as, for example, making a quilt as a way to teach fractions.

This may sound simple. But their use of the arts to supplement any subject, from math to social studies to science, proved necessary. 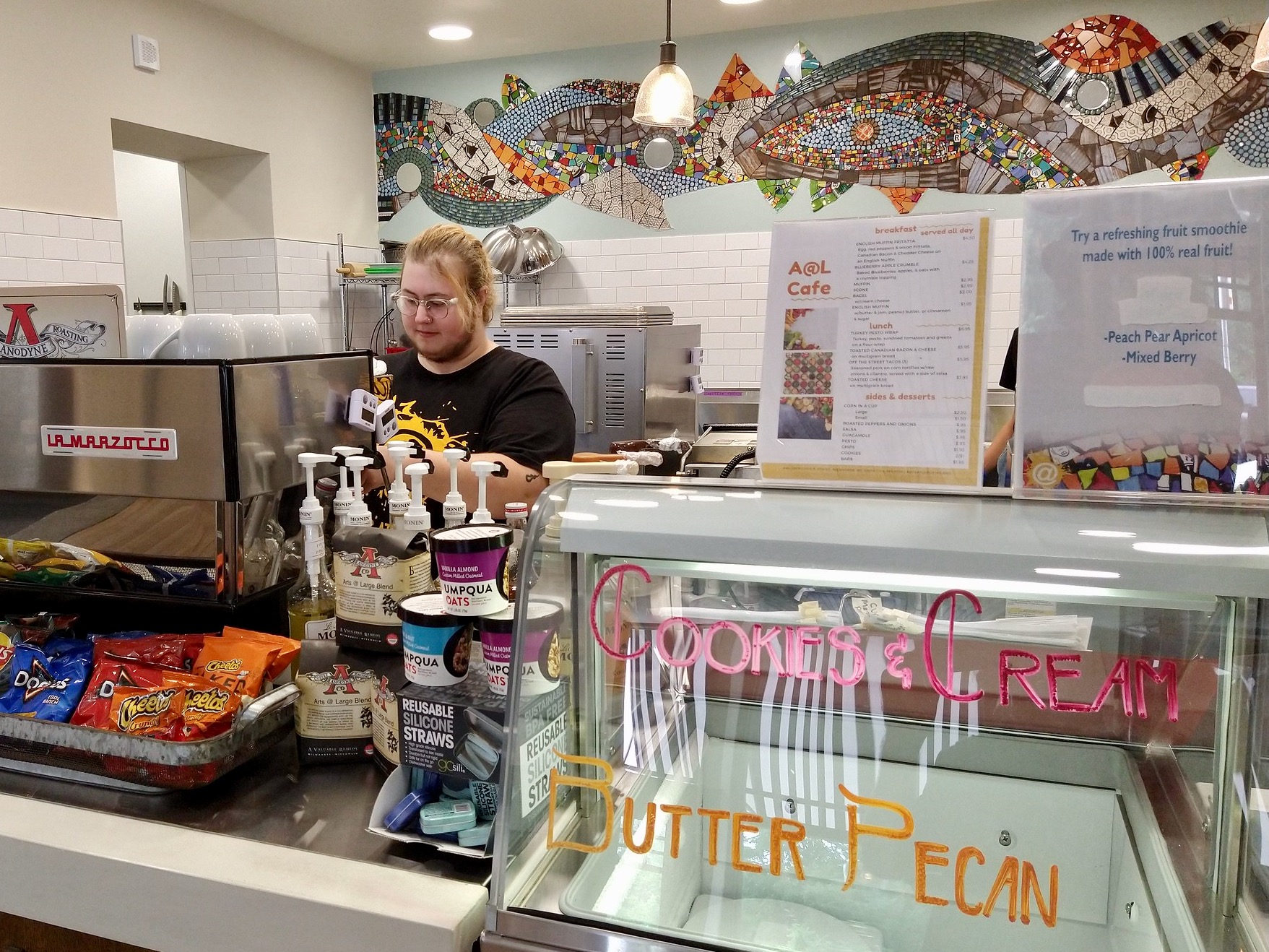 Bob Kann, a longtime friend of Sullivan’s who was commissioned by Arts @ Large to write a book about the nonprofit, said that what Arts @ Large was doing was innovative at the time.

“In those days, teachers were operating in silos even more than now,” he said. “Math and art teachers didn’t interact.”

Arts @ Large now has a brick–and–mortar home and community center located at 1100 S. 5th St. It serves an average of 50 schools and 13,000 students, families and community members each year.

It also has a new CEO. Sean Kiebzak took over after Sullivan stepped down in July 2020 and became the permanent CEO in January.

In addition to leading the organization, Kiebzak also is Sullivan’s son. When his mother started the nonprofit, Sean was 15 and “wanted to be a rock star.”

After taking over, Kiebzak felt the pressure of needing to succeed, not just because he believed in the organization’s mission, but because he needed to prove he was qualified for the job and not just handpicked based on family connections.

“I was really nervous about how people would react,” Kiebzak said. “But after my six-month evaluation my insecurities about that have gone away.”

Like any nonprofit, the nonprofit still faces its challenges.

It needs $1 million to close out financing on the community center, for example.

But to meet that financial goal, Sullivan said the nonprofit’s focus must remain on serving Milwaukee residents.

“We do what’s right and the money will come,” she said.