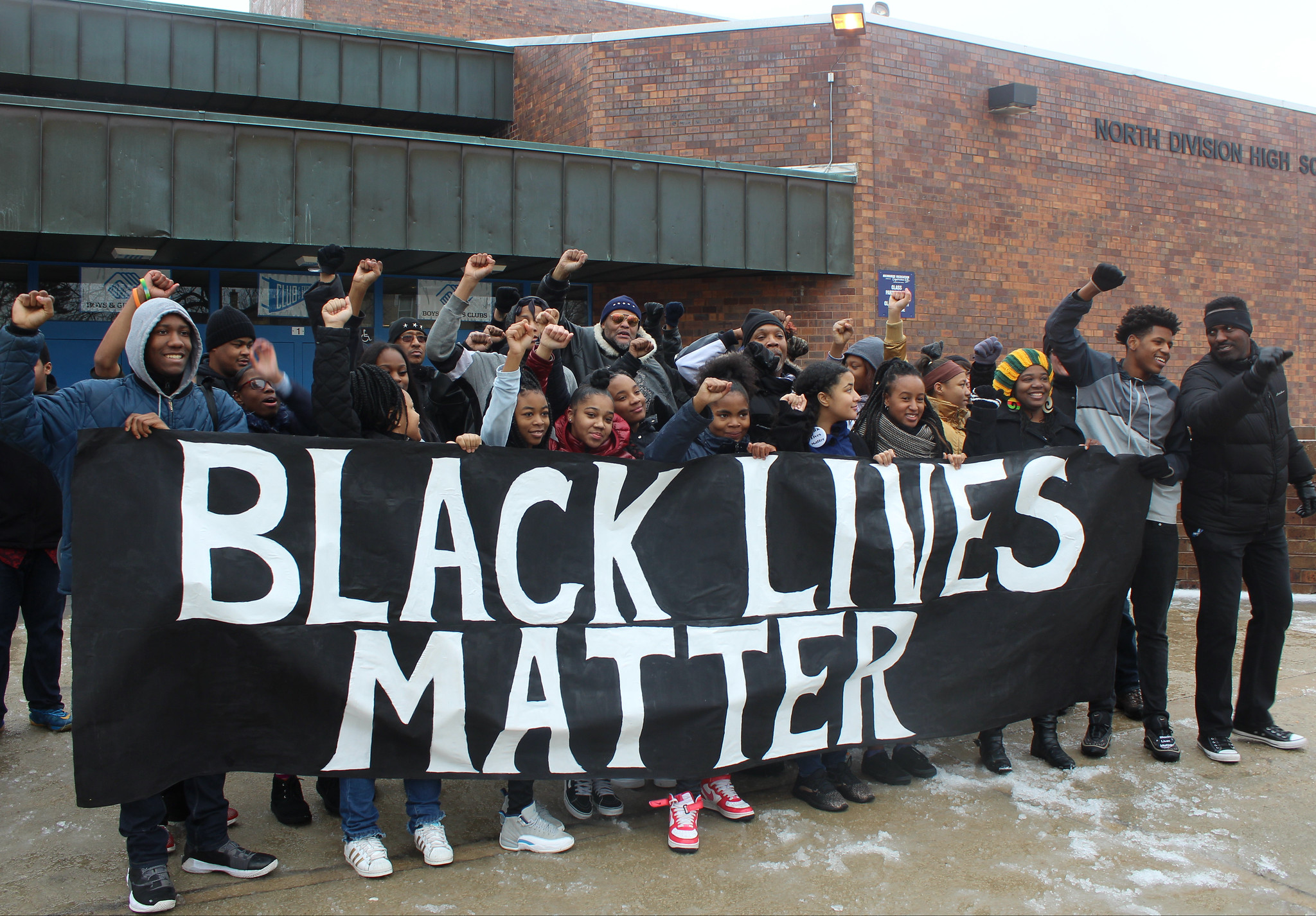 Nearly 200 students demonstrated outside North Division High School for Black Lives Matter at School Week in 2019. Three years later, MPS reports that despite making up around 50% of students, Black students account for around 80% of suspensions. (NNS file photo by Allison Dikanovic)

Despite making up 50% of the MPS student body, Black students have received 81% of suspensions this school year, according to data MPS will present to the Milwaukee Board of School Directors on Tuesday night.

In total, over 10,489 suspensions have been issued during the 2021-22 school year, according to monthly reports submitted to the Milwaukee Board of School Directors.

Of the 1,504 reported suspensions for “chronic disruption or violation of school rules,” 1,227, or about 82%, were given to Black students.

Earl Arms, an MPS spokesman, said: “Overall our suspensions have gone down across the board for all behaviors and racial groups. As a total of all suspensions, it continues that 80% of all suspensions are written for Black students. That disproportionality can vary by school and behavior over that time period.”

Following an investigation by the U.S. Department of Education Office of Civil Rights, or OCR, that found that the district had disproportionately suspended or expelled Black students over two school years, MPS has submitted annual reports on its disciplinary data to OCR.

MPS also began reporting on its monthly suspension data to the Milwaukee Board of School Directors following a resolution in September 2020.

The OCR investigation looked at data from the 2011-12 and 2013-14 school years and found that Black students made up about 55% of the student population and accounted for about 80% of suspension and expulsions, according to the report.

In January, the number of suspensions for all races and Black students was 1,182 and 938, respectively, compared to 2,223 and 1,733, respectively on average for each month between September through December.

All MPS schools were learning virtually from Jan. 4 through Jan. 14, or roughly half of the month.

Arms explained that virtual learning is more accommodating of behaviors that are otherwise threatening to staff or other students. Those behaviors can be dealt with in other ways. Therefore, he said, they “do not result in suspensions at the rate as behaviors do while all students are learning in person.”

The district report also highlighted alternatives to suspension that were used, again broken down by race.

MPS is required by the Milwaukee school board to report monthly on discipline following a resolution in September 2020, more than two years after an agreement with OCR to take specific steps to address racial disproportions in discipline, including providing staff with alternatives to suspension, holding informational sessions for parents and community members and establishing student committees to “allow students to discuss the implementation of discipline policies and procedures.”

Some schools appear to be making strides at reducing suspensions overall. At a presentation of discipline data to the school board’s Parent and Community Engagement Committee in January, MPS highlighted the work done by Audubon Middle and High School, also known as Audubon Technology and Communication Center.

This included the formation of a “Student Discipline Committee,” made up of middle and high school students, that helps staff craft disciplinary policy.

Audubon principal Leon Groce told the board last month that the inclusion of student voices led to change in the school’s cellphone policy, which resulted in an “almost 30%” reduction in referrals for suspension.

Through December, the majority-Latinx school (63.9%) tallied 309 suspensions overall, compared to 962 during the 2017-’18 school year through December. Groce said that student voices were essential to this reduction.

“When we invite (student voices) to the table, it does make a difference,” Groce said.

“We are proud to say that we are making strides in the right direction.”

MPS said that all 30 middle and high schools have a Student Discipline Committee that meets monthly.

MPS will present this data to the school board’s Parent and Community Engagement Committee on Tuesday night at 5:30 p.m.

If you are interested in giving testimony, email your first and last name to governance@milwaukee.k12.wi.us with “PACE committee board testimony” in the subject line before 3 p.m.

MPS is also hosting a community conversation about classroom conduct, which will touch on discipline practices and procedures.

You can register to attend online here.