You are here: Home / Home / Carousel / On the South Side, a historic Ukrainian church does what it can to support a country
Share this... 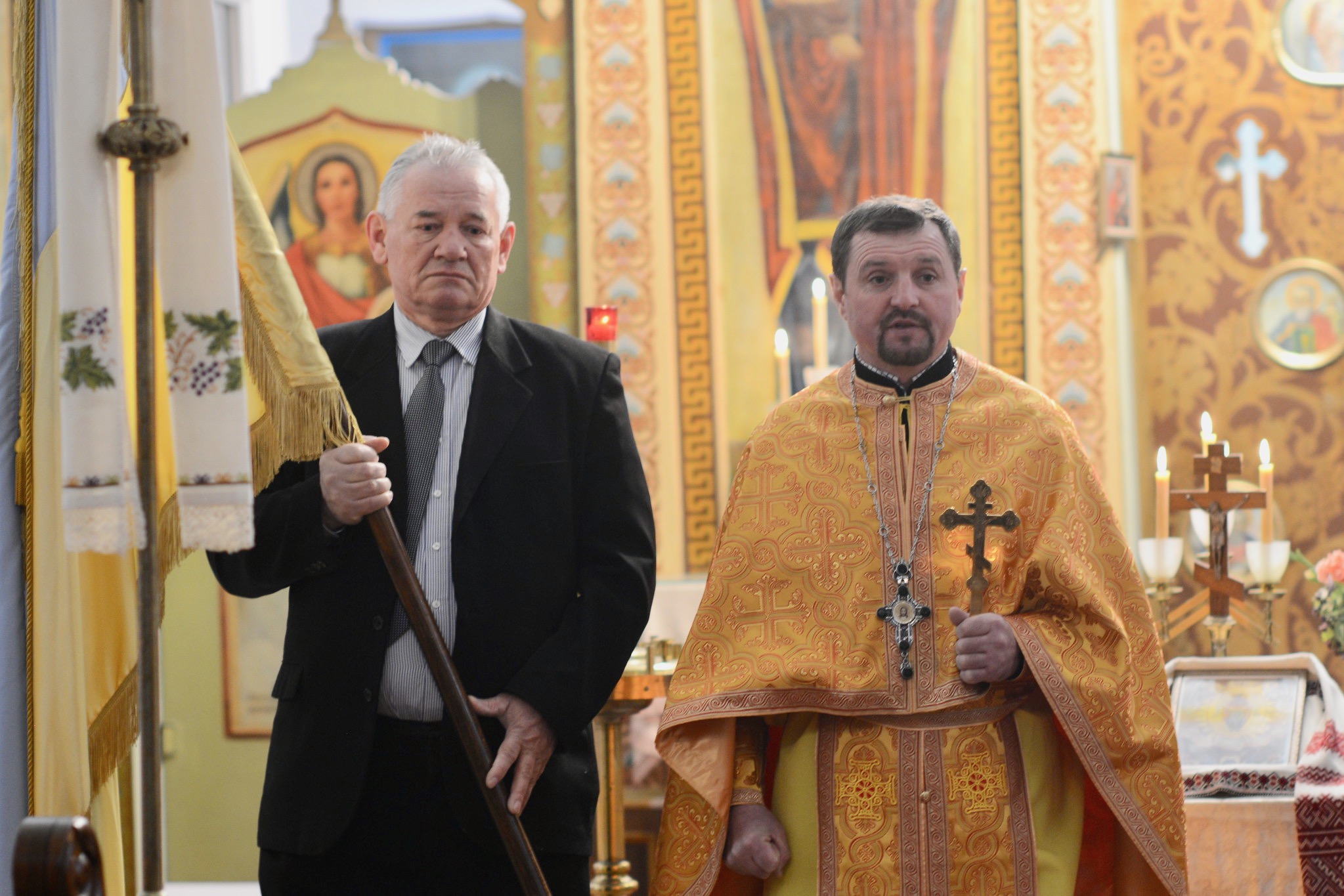 Before services began, churchgoers gathered to pray for Ukraine and sang a rendition of the Ukrainian national anthem. From left, Prokopiy Chorney and Fr. Mykola Limar. (Photo by Sue Vliet)

At the head of the church, the priest stands and recites hymns and prayers in the Ukrainian tongue. At its rear, a choir accompanies him, completing the other half of the service. For two hours, they harmonize and pray as the priest moves through each part of the Mass in the Orthodox tradition.

Between them is the congregation, mostly silent. Their heads are bent in reverence, pensive and clouded by current events. Most of them still have family in Ukraine – some were even born there. A recent invasion by Russian forces has resulted in casualties and destruction.

But it’s Sunday. The people are gathered in prayer just as they have been for over a century. And here, there’s work to be done.

The church, a stronghold for the city’s Ukrainian community since 1917, is rallying to support loved ones overseas. 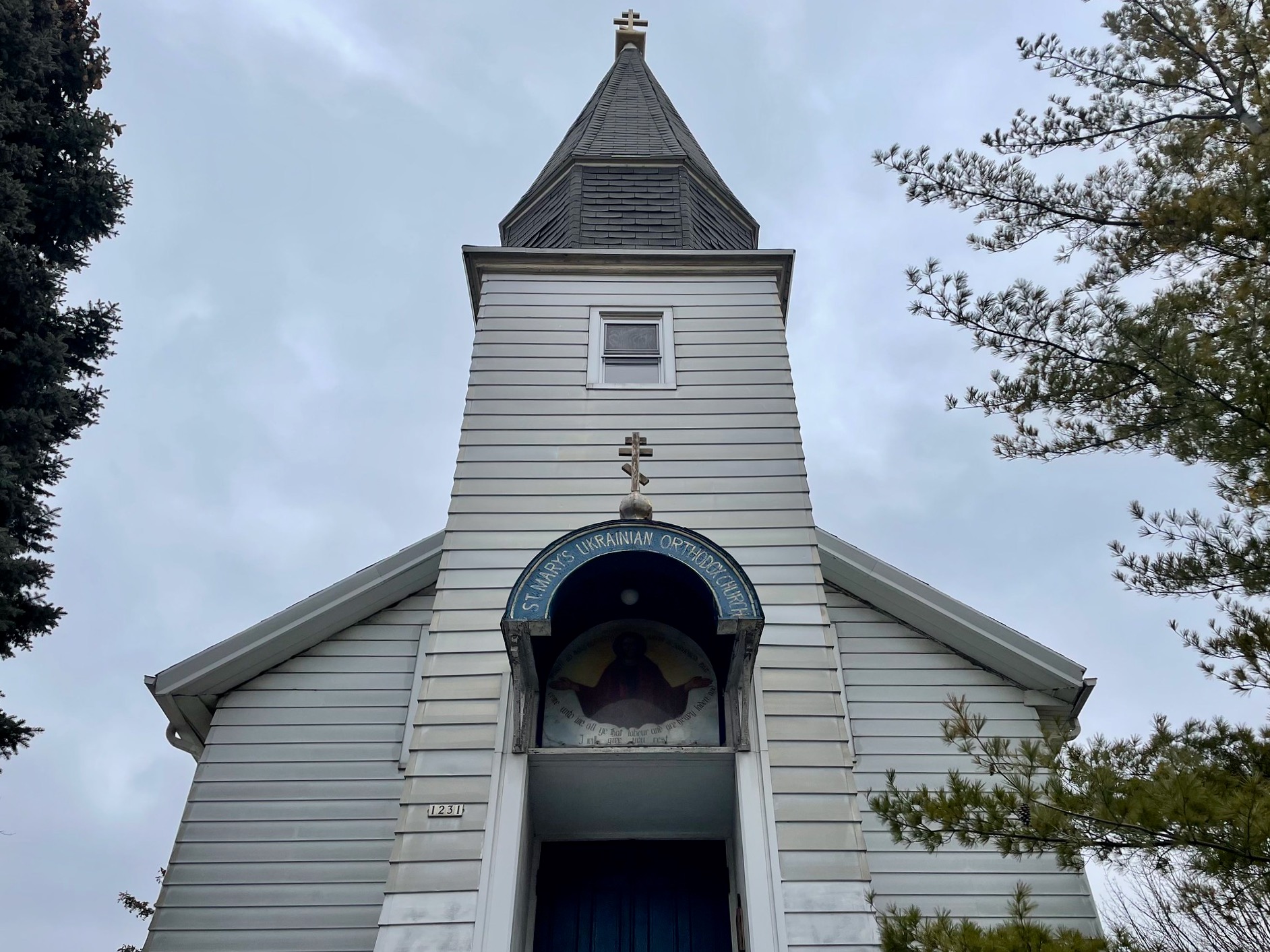 St. Mary’s Ukrainian Orthodox Church has been a stronghold for the city’s Ukrainian community since 1917. (Photo by Sue Vliet)

Much of the church’s decor is still the same as it was at its founding, said Ed Bergey, parish treasurer. That includes the iconostasis, translated from Greek as “icon stand,” a wall of religious icons and paintings common in Orthodox churches that separates the sanctuary from the rest of the chapel.

In an excerpt from the Encyclopedia of Milwaukee, a digital urban historical project by University of Wisconsin-Milwaukee, writer Bill Reck describes the development of St. Mary’s after it was purchased by Ukrainian community members in 1917. It had previously been a Norwegian Lutheran church.

“This site, now known as St. Mary’s Ukrainian Orthodox Church, long formed a central hub for the city’s ethnic population,” Reck wrote. “For example, in the early years of the parish, Orthodox as well as non-Orthodox Ukrainians gathered for services, but also for opportunities to socialize with other Ukrainians, despite religious and cultural differences among the group.”

A large reason for the influx of Ukrainians in the area was displacement after major conflicts, such as World War I and World War II. After fleeing Europe and finding themselves in Milwaukee, they took it upon themselves to keep the customs alive.

As new arrivals to the country, the church served as a place to meet fellow Ukrainians.

“They were displaced people,” Bergey said. “They came here looking for a common language and a common history, if you will.”

After services on Sunday, the congregation still gathers in the basement of the church. They eat, drink and socialize just as the church’s forbears did. Bergey said the gatherings remain an important part of the community in the city.

The church wears its age on its sleeve. Severe problems with the roof and beams of the church have forced staff to put up bungee cords to reinforce the walls, Bergey said. The parish staff is hoping to make repairs soon. 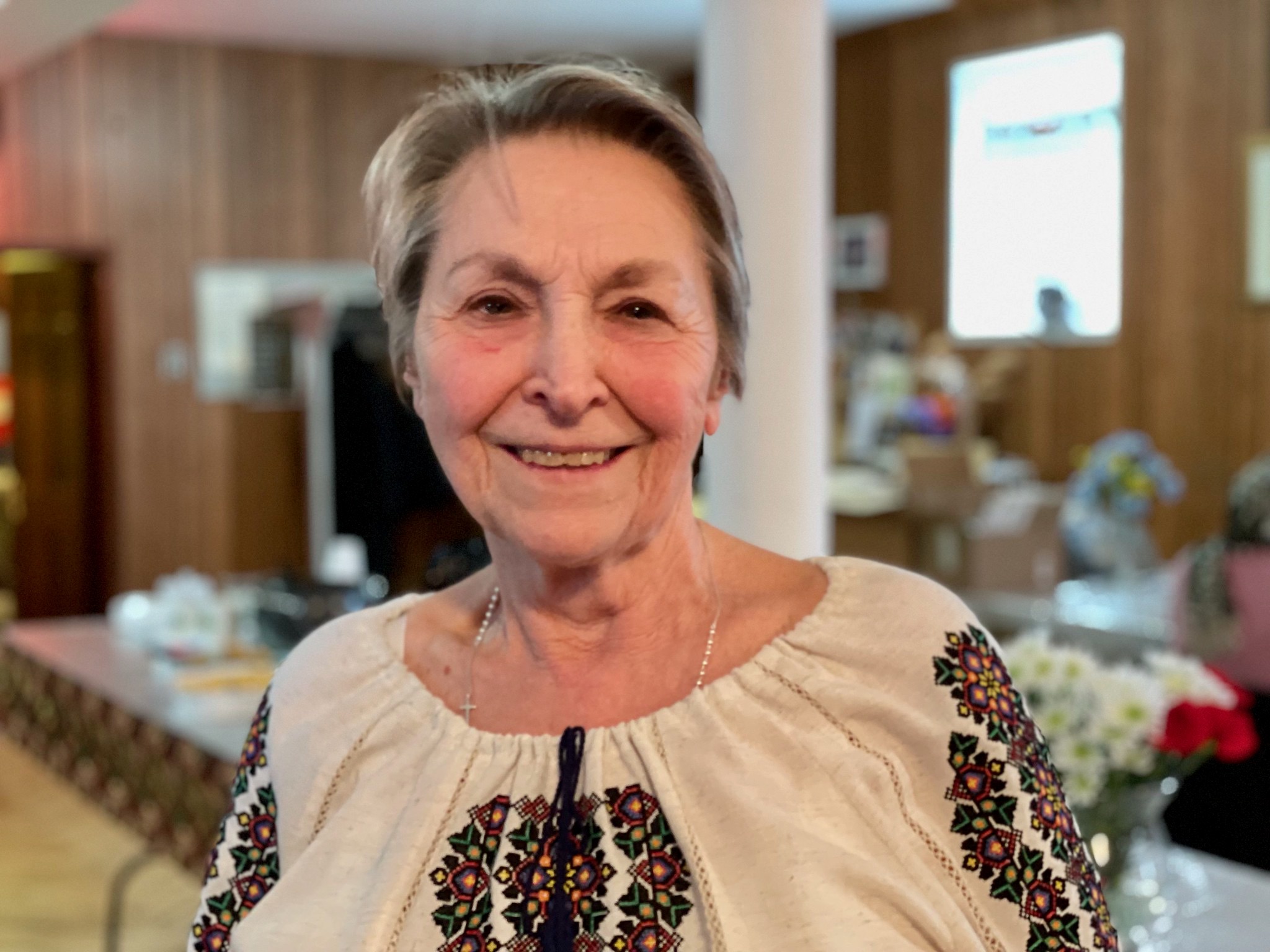 Parish Board President Sophia Torcivia has been leading efforts to help Ukrainians. “I’m like the go-between,” Torcivia says. “I keep going to where the most good can be provided.” (Photo by Sue Vliet)

It’s rare to catch Sophia Torcivia, parish board president of St. Mary’s Church, in a moment of downtime. On top of trying to keep the church in one piece, she’s got people depending on her. On top of the work she does at the church, she keeps busy by volunteering at a food pantry.

Her latest project is rallying medical supplies to send to the Ukrainian front.

“I’m like the go-between,” Torcivia, who was born in the Ukraine but whose family fled when she was a child, said. “I keep going to where the most good can be provided.”

It’s not without its toll. She said she had a splitting headache from having cried so much over the last few days and was desperately trying not to cry anymore.

In some moments, though, such as the Ukrainian national anthem being played at the church, she can’t control her emotions.

Even through it all, she doesn’t plan to stop trying to help anytime soon. For Torcivia, this is a mission.

“If I can be of help to the Ukrainian people in any way possible, that’s why God put me on this Earth,” Torcivia said. “If that takes my time, then it’s well worth it. If I can just see that maybe I saved two people, even one – well, one is better than none.”

Those who wish to send donations for medical supplies can do so by sending them to 1231 W. Scott St. Supplies can also be donated after Sunday services, which start at 10 a.m.

The church has a goal of raising $60,000 for repairs. It has a GoFundMe page for people to donate online.