You are here: Home / Home / Carousel / The YMCA Teen Achievers program challenges youths to define their own version of success
Share this... 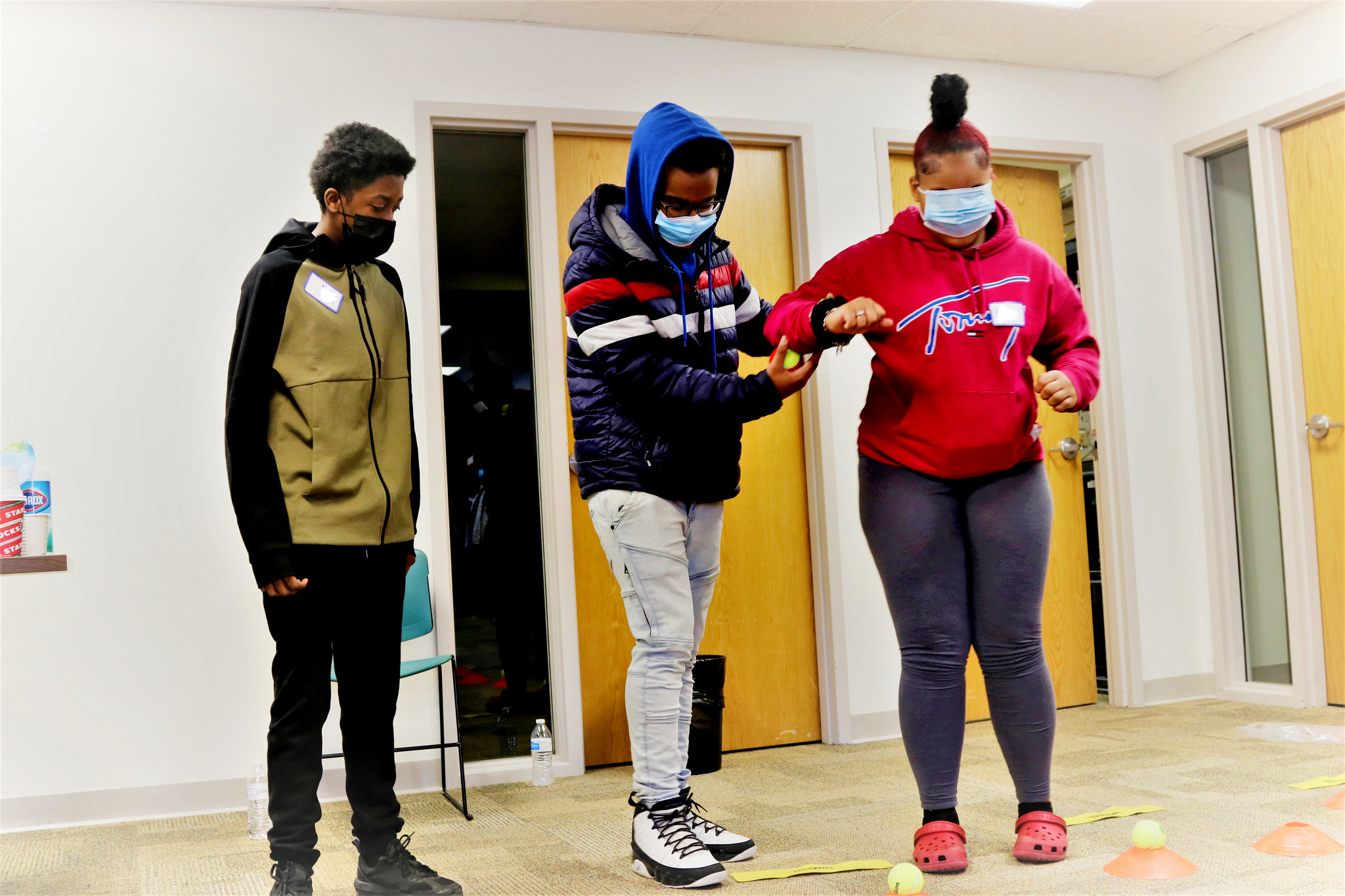 He knew it was a program meant to get students ready for post-high school life. But as a sophomore, he does not know exactly what he wants to do after he graduates.

However, Burrell has found that the Teen Achievers program is just as much about developing him as a person as it is about cultivating his college and career prospects.

“I’ve only just started … but they’ve already taken me outside of my comfort zone,” Burrell said after his first in-person meeting with other Teen Achievers recently.

During a game used to practice effective communication, Burrell had to guide another teen who was blindfolded through a maze of tennis balls

“I don’t really talk to strangers like that, but guiding someone else that I don’t really know forced me to do what I don’t normally do,” Burrell said, adding that he appreciates opportunities to try new things and explore himself.

Since 1962 the Teen Achievers program has provided career and college preparation for high schoolers throughout the nation. At first, the program went by the name “Black Achievers” to signal its intention to cater to Black youths, but the program now goes by “Teen Achievers” to be more clear that it is open to teens of all racial and ethnic backgrounds.

Glenn Carson, senior director of teen programming at the YMCA of Metropolitan Milwaukee, said the program has also changed in other ways since its inception, such as being held both in-person and virtually, as well as increasing the program’s emphasis on developing teens’ socioemotional growth.

Socioemotional growth refers to helping youths experience and manage their emotions in their relationships.

“We are not just pushing college, but your success, whatever that means to you,” Carson said. “We want to be a resource to help them figure out what” success means for their future.

Adults are welcome, too

Since opening in Milwaukee in 1982, the YMCA Teen Achievers program has touched the lives of more than 7,000 teens as well as about 950 adult community leaders.

These adults, known in the program as the “Adult Achievers, learn alongside the Teen Achievers during Saturday meetings. They are recruited through partnerships the Teen Achievers program has with local corporate sponsors such as We Energies, Kohl’s and Children’s Hospital.

Adults participate in programming alongside the teens. During a February Saturday Summit – a monthly meeting of all teen and adult members of the program – participants focused on managing stress, communicating effectively and working with others toward common goals. To facilitate, the YMCA partnered with STRYV365, a local nonprofit providing education and athletic programs to develop a resilient mindset in kids. 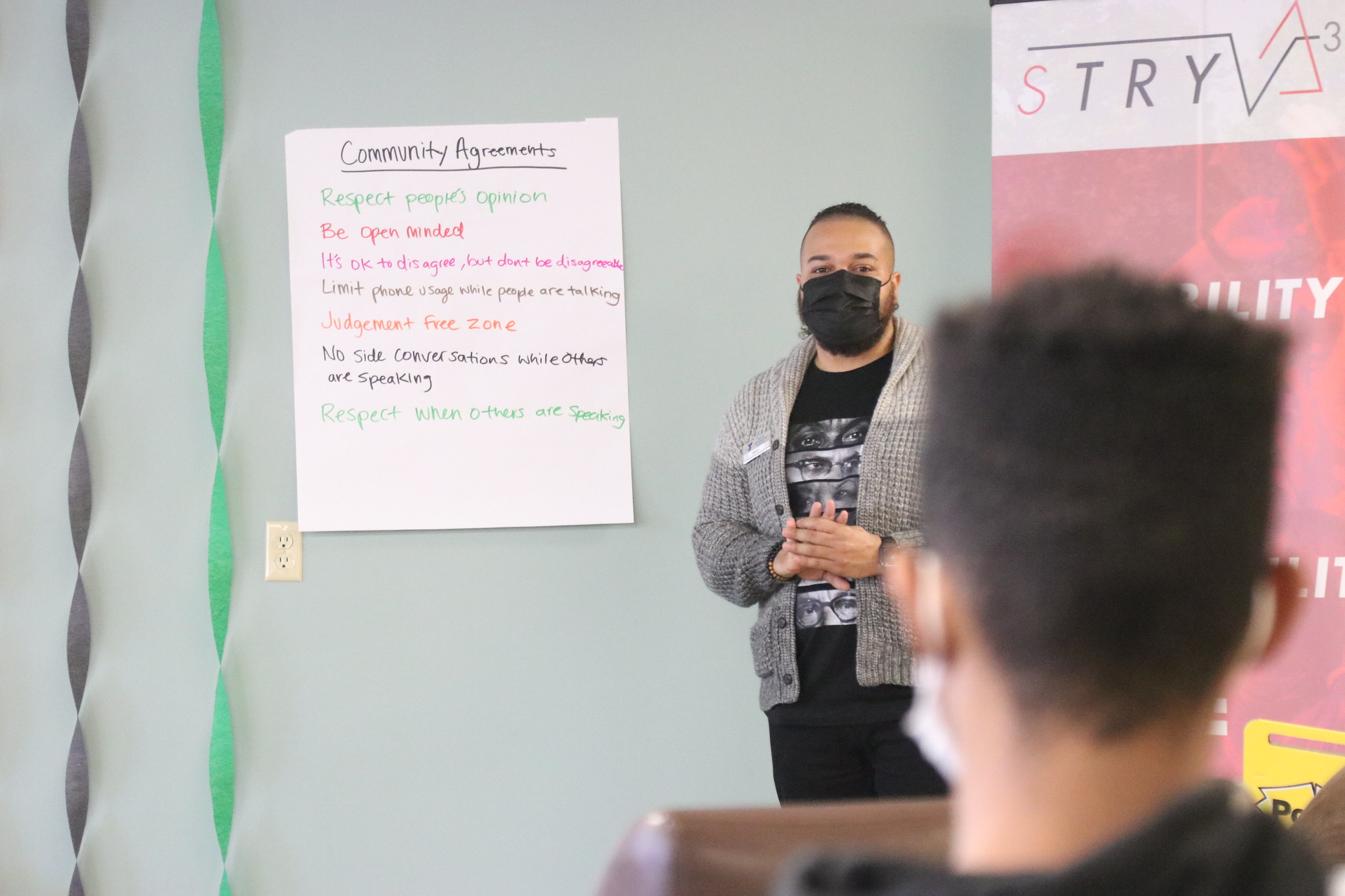 Glenn Carson, senior director of teen programming at the YMCA of Metropolitan, goes over community agreements with a cohort of Achievers. (Photo by Sam Woods)

Karynn Collier, a self-described “people person who loves to help,” was recruited to the Adult Achievers through the program’s partnership with Kohl’s and has a background in youth and community development through her church.

She said that mentoring in programs like these comes down to being present, not perfect. This means finding ways to connect with young people not because of your professional experience but by sharing from your life.

As she and a Teen Achiever stood next to a piano, she shared that when she was young and learning piano her teacher yelled at her, causing her to quit. This made the teen laugh and share a story about a time she gave up.

Collier saw this exchange as an encapsulation of what she is trying to accomplish: connect with one person at a time in a small way every chance you get, which she hopes will have a huge impact on the cohort by the time the program ends in June.

“At least now she knows that she’s not the only one who has quit at something,” Collier said. “We have that in common and can build on that.”

‘I want to leave with other people’s perspectives’

To recruit teens, Carson said he works with area schools to identify students who can benefit from the structure the nearly six-month program provides.

Carson and his team work to identify each teen’s goals through surveys, conversations and icebreakers.

Teens in the program meet as separate regional cohorts at three locations within city borders and once per month all together at the Saturday Summits.

Both the regional meetings and citywide meetings are packed with programming that develops the teens’ socioemotional skills and introduces them to careers and colleges that may be of interest to them based on their individual goals revealed early in the program.

There are also opportunities for SAT/ACT prep, financial management and community service throughout the duration of the program.

Carson said a big part of getting teens to buy into the program is having adults practice what they preach. He said he shared with this year’s cohort that his personal goal during the program was to get better at speaking Spanish, which the teens hold him accountable to just as he and other staff hold them accountable to their goals.

“Now they’re asking me to see my Duolingo to check if I’ve been practicing,” Carson said.

Burrell still doesn’t know exactly what is next for him after high school.

For now, though, he’s perfectly content with learning from the wealth of knowledge around him.

“I want to leave with different people’s perspectives, and learn how other people look at things.”