You are here: Home / Home / Carousel / Clearing the air of coal: How the community pushed We Energies to clean up its Menomonee Valley plant
Share this... 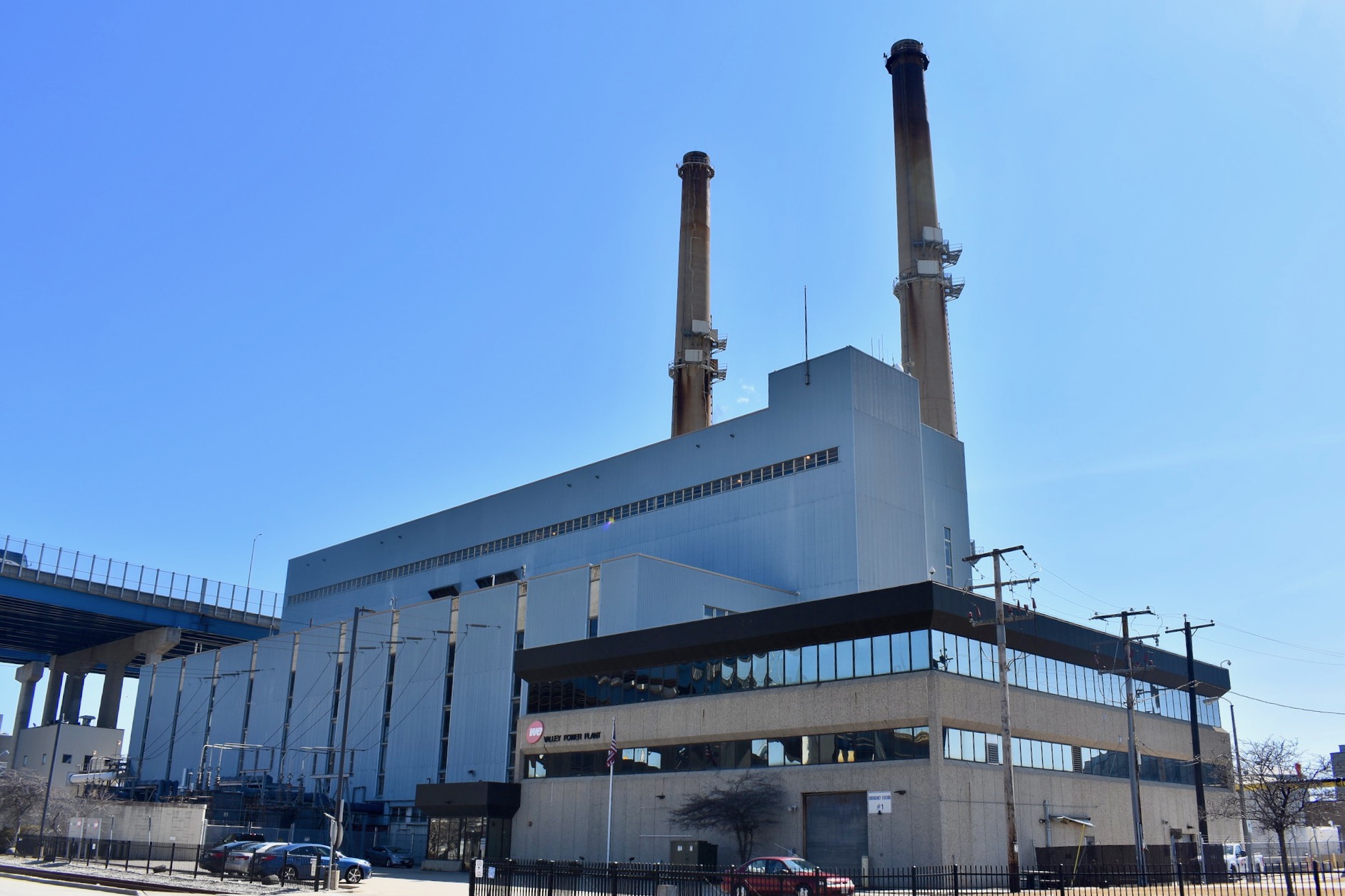 We Energies owns the Valley Power Plant in the Menomonee Valley neighborhood, which completed its conversion from coal to natural gas in 2015. (Photo by Alexandra Garner)

Editor’s note: The author of this story served as an intern for the Sierra Club Wisconsin Chapter from September 2020 to May 2021.

Driving on the I-94 highway into Milwaukee, clouds of steam can often be seen puffing out of two tall smokestacks into the sky. But just less than 10 years ago soot often blew out from those stacks.

Centered in the Menomonee River Valley neighborhood is the We Energies Valley Power Plant. It provides steam and uses natural gas for electricity, but before 2015, the plant used coal.

How that transition occurred offers a study in how community members and organizations can join to advocate for their health and environmental change. Accounts by activists at the time and press reports show a collective effort to make the Valley Power Plant cleaner.

Community efforts to push We Energies to improve air quality control methods began as early as 2010, when the Wisconsin Department of Natural Resources proposed to renew the Valley Power Plant’s air pollution permit. Opponents argued that the proposed permit did not align with We Energies’ plan to deal with its coal-fired power plants as part of its “Power the Future” plan.

Dennis Grzezinski, former senior counsel of the Midwest Environmental Advocates, a nonprofit law center, said in an email that We Energies decided to close its coal plant in Port Washington, replacing it with a natural gas plant. Grzezinski pointed out that the town was “an almost exclusive white community.”

“Its Valley Plant, on Canal Street in Milwaukee, nestled between the state’s largest Latinx and Black neighborhoods, which had never had upgraded air pollution control equipment installed, was planned to be left unimproved and continuing to emit large quantities of toxic air pollution into those communities,” Grzezinski said.

According to a 2010 Milwaukee Journal Sentinel story, the Valley Plant was We Energies’ oldest power plant to lack modern emission controls at the time.

In 2012, the NAACP, Indigenous Environmental Network and the Little Village Environmental Justice Organization released a study called “Coal Blooded: Putting Profits Before People” that assessed the impact of coal plants on low-income communities of color across the United States.

The study found that of the 209,000 residents who lived within three miles of the Valley Plant, two-thirds were people of color.

It “did not address at all the environmental justice issues posed by the disparate treatment of white and minority communities,” Grzezinski said.

When asked what role the community played in We Energies’ decision to transition the Valley Power Plant from coal to natural gas, We Energies spokesperson Brendan Conway said in an email that there were several opportunities for community members to provide feedback at public meetings and learn about the transition.

“In October 2012, We Energies provided tours of Valley Power Plant to nearby residents, local businesses and steam customers,” Conway said. “The tours were held on two different days and provided guests with the opportunity to learn more about the current operations of the plant and the proposed conversion to natural gas.”

In 2010, press reports showed that We Energies was considering adding more pollution controls to the Valley plant or transitioning it to cleaner fuel.

Pamela Ritger de la Rosa, Milwaukee program director and staff attorney for Clean Wisconsin, a nonprofit that advocates for environmental protections in the state, said We Energies may have converted the plant because its leaders saw that coal was on the decline, as was and still is happening throughout the electric industry. But she said the community played a key role in pressuring We Energies to make a change at that time.

“I think if that organizing hadn’t been done, they might have waited to convert this plant at a later time,” Ritger de la Rosa said.

The Wisconsin DNR hosted a public meeting in Milwaukee in November 2010 in which roughly 150 people came to voice their opinions on the proposed permit, Grzezinski said.

“Normally, at most a handful of people would attend such a public meeting, apart from DNR and company staffers,” he said. “They more than overflowed the large hearing room, and virtually all of them wanted a permit that would protect public health.”

Midwest Environmental Advocates, Black Health Coalition of Wisconsin, Milwaukee Latino Health Coalition and the American Civil Liberties Union of Wisconsin also submitted comments to the Wisconsin DNR in November 2010 that voiced their opposition to the proposed permit. The groups’ leaders said the proposal failed to protect public health, violated state and federal provisions and regulations of the Clean Air Act and did not comply with the DNR’s duty to uphold environmental justice and civil rights.

‘They could no longer ignore us’

In 2011, environmental, health, social and religious organizations joined together to create the Cleaner Valley Coalition.

Dianne Dagelen, former conservation chairperson for the Great Waters Group of the Sierra Club, said We Energies initially turned the coalition away when former chairperson Juan Carlos Ruiz went to talk with them.

“There wasn’t a lot of willingness on We Energies’ part to make that conversion. They felt it was too costly at the time,” said Royal, who was involved as a community member.

Ritger de la Rosa said in May 2012, the Cleaner Valley Coalition saw an opportunity to raise its concerns about the Valley Power Plant during a Wisconsin Public Service Commission hearing about We Energies’ proposed rate increases.

The Cleaner Valley Coalition also hosted events to engage the Menomonee River Valley community and share information about the plant.

“They knew that their families had high rates of asthma, and they knew that sometimes they’d go outside and it’d be harder to breathe than at other times,” Ward said. “I don’t know that everyone knew the coal plant was one of the causes of that.”

In August 2012, We Energies announced that it would seek approval from the Wisconsin Public Service Commission to transition the Valley Power Plant from coal to natural gas.

Ritger de la Rosa said the plant’s transition from coal to natural gas had a huge impact in Milwaukee, cutting greenhouse gas emissions in half and dramatically decreasing air pollution, particularly soot, smog and particulate matter that can lead to asthma and heart disease.

Last year, We Energies announced it would be closing the coal-fired power complex of the Oak Creek Power Plant in 2023 and 2024. This excludes the Elm Road Generating Station, which Ritger de la Rosa said community members have been organizing to shut down.

Conway said community members living in the Menomonee River Valley and customers have been supportive of the transition.

Royal said community members aren’t primarily focused on the Valley Power Plant right now. Instead, he said, residents have other environmental concerns like oil runoff from highways and lead pipes across the city.