You are here: Home / Home / Carousel / ‘It hurts’: Milwaukee drivers find pain at the pump
Share this... 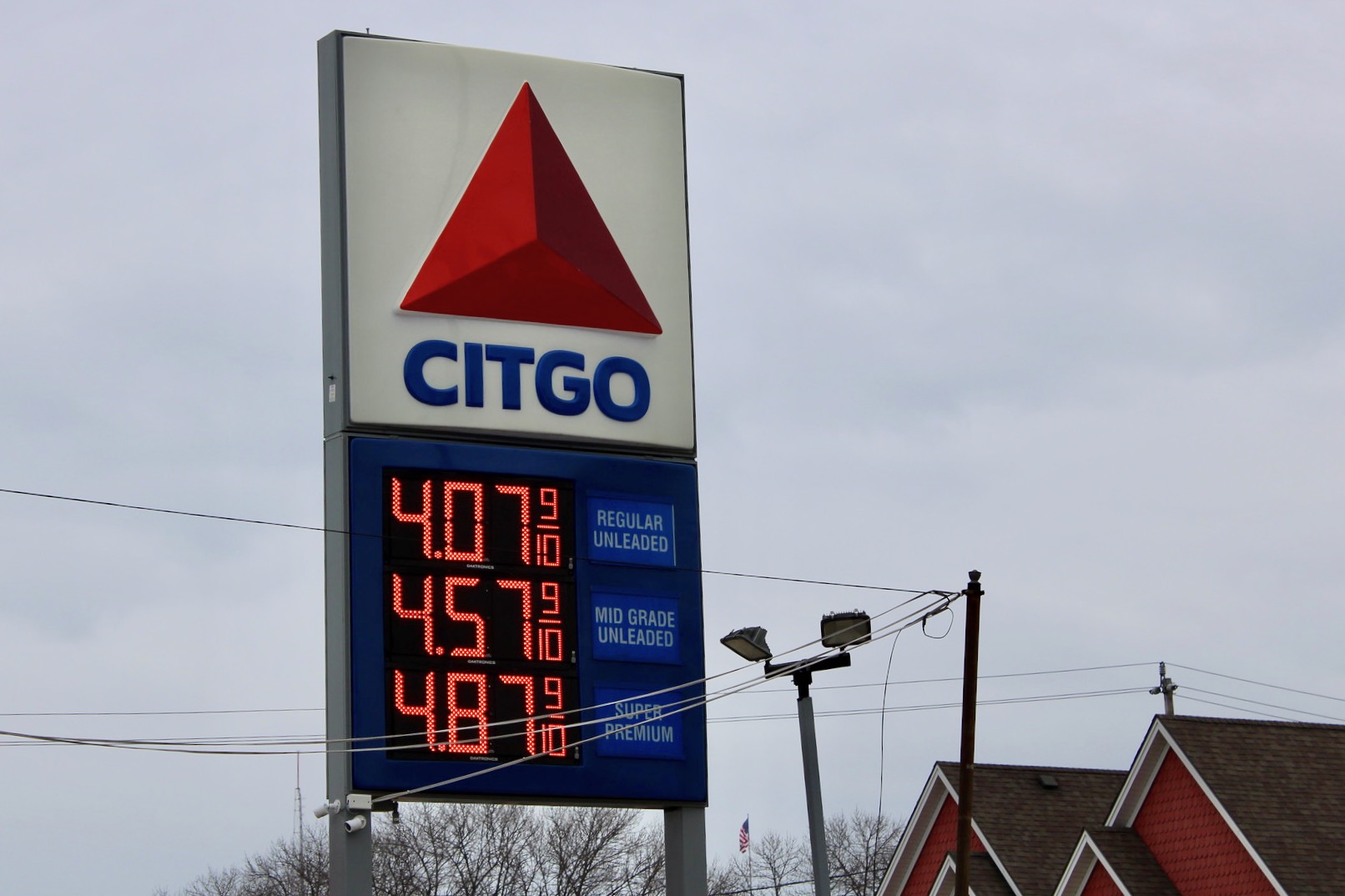 The price of gasoline has residents rethinking their commutes and purchases. The price here was nearly $4.08 per gallon for regular on April 20 and nearly $5 for premium at this Citgo station at 1530 W. State St. (Photo by Matt Martinez)

As gas prices reach an average of $4 a gallon, Milwaukee residents on the North Side and South Side say they are finding it more difficult to fill their tanks and are rethinking their commutes and purchasing strategies.

GasBuddy, an online price website, listed a low of $3.74 for regular on Monday and a high of $3.84 in a comparison of Milwaukee area stations.

John “Jojo” Jimenez lives near South 22nd Street and gets gas from a nearby Citgo on National Avenue. He often has flashbacks of how relatively low gas prices used to be.

“It’s kind of annoying to see the prices go higher each time because back then I remember when gas was $2,” he said.

Jessica Thoma, who was pumping gas at a Speedway on South 76th Street, knows increased gas prices are a matter of simple economics as companies pass on higher costs due to a spike in the price of global crude oil.

She realizes this but is having trouble adjusting.

Elizabeth Watson, who was pumping her gas in West Milwaukee recently, thinks the rising gas prices are linked to the 2020 COVID-19 outbreak. This is something the experts say has also contributed to the increase. When the public was not going out as much, the prices were low to match the supply and demand. Now, Watson recognizes, demand is going up, but supply is staying down.

Nationally, prices reflect this. According to the U.S Energy Information Administration, the prices were about $2.32 a gallon in March 2020. When businesses started to open up from COVID restrictions in 2021 and 2022, the prices jumped to $3, then to $4 a gallon.

“It catches you off guard,” said Alycia Berete who lives on Milwaukee’s North Side.

Seventeen-year-old Yar Cam is a South Side resident who lives on West Layton Avenue. He said he understands that the United States had blocked Russian oil imports, but also knows that this represented only about 2% of U.S. oil imports. Given that small percentage, he has trouble reconciling the effect.

“If the prices are going to increase, it should at least be a reasonable amount and for a reasonable reason,” he said.

But fingers point toward global crude oil, not domestic supply, as the trigger for the higher prices, not Russian exports to the U.S. The Energy Information Administration lists that price at about $102 a barrel.

Matthew Hauser, president and CEO of Wisconsin Petroleum Marketers & Convenience Store Association, said, “Crude oil was recently trading at a 13-year high, placing upward pressure on retail gas prices. Even before the ban on Russian imports, many oil buyers were already reducing their purchases of oil from Russia, constraining oil supplies in an already tight market.”

It doesn’t look like things will get better in the near future, Hauser said: “Retailers are seeing daily wholesale price changes for gasoline and diesel fuel. It appears this volatility may last for a while.”

Erin Lentz, who was pumping gas in the Southridge area but lives in West Allis, said she feels for pickup truck drivers who have to pay more.

Thoma, one of those pickup drivers, put over $65 of gas in her truck at Speedway on South 76th Street.

Customers such as Thoma are now considering smaller vehicles or even vehicles that eliminate fuel consumption altogether. Thoma said she’s looking forward to purchasing a Tesla.

Hauser explained that Wisconsin is lucky enough to have a plentiful supply.

Nonetheless, Watson said she still procrastinates to fill her tank, hoping that prices will decrease. She jokingly told her mom that she’s lucky to have a second job that will pay for her gas after those two-hour drives to visit family in Chicago.

“The prices there aren’t any better, but Wisconsin gas is better because Illinois taxes everything,” Watson said.

You can let someone else drive