You are here: Home / News / Health and Wellness / The Healistry Summit takes aims at Milwaukee mental wellness
Share this...

A community event on Saturday  wants to give residents new tools to manage their mental health, drawing from experts around the city.

The Healistry Summit will focus on healing and coping methods for people of color during the pandemic. The event will also discuss the importance of mental health and mindfulness and destigmatizing services.

La’Ketta Caldwell is the founder of Keytalife, an organization that advocates and empowers youth to discover their purpose, and she is co-founder of Raising The Bar, a nonprofit that provides mentorship and opportunities for youth and adults. She said that the event is meant to provide a space for community healing. The work began during the pandemic with events tailored toward women to share their healing and coping strategies.

The event is a partnership between Keytalife, Raising The Bar, the All of Us Research Program, a health database from the National Institutes for Health, and Unity Gospel House of Prayer, a church on the city’s North Side.

Caldwell said the goal of the summit is to bring together people doing powerful work inside the community who can speak to each individual.

Those interested can register on Eventbrite. The event is free.

Caldwell said they hope to have roughly 70 people for the first event to make sure sessions can still be personal for attendees; they had roughly 40 signed up as of Thursday.

A look at the speakers

Harry Evans, founder of Heal Black Man, a group that engages Black men with yoga and wellness services, said that he hopes to share his tips with attendees on how to live a balanced life.

Part of that balanced life includes exercise such as yoga, and meditation, which allows people to take a break from their everyday lives and helps clear their minds.

Evans said sometimes participants are skeptical. Their preconceived notion might be that yoga isn’t “for them.”

Usually, they get over that quickly, he said.

“You can see it — it allows them to relax a bit, then we have a bit of dialogue after,” Evans said. “That’s the goal, getting men in the habit of expressing themselves.”

Lakesha Jones, a licensed professional counselor who will lead a breakout group for women at the event, said participants will engage in activities that encourage positive thoughts and affirmations.

It will also help people identify ways to manage their mental health, including an activity where participants will have a list of techniques and coping methods. They’ll identify which ones they would be willing to try.

“We’re going to help people add another tool to their toolbelt,” Jones said.

For breakout-session speaker Ed Hennings, the man he is today has been 25 years in the making. Since 2016, Hennings has become the owner of three businesses around the city and started his own motivational speaking engagements. In the 20 years before that, he was serving time in a 40-year prison sentence for first-degree reckless homicide.

When Hennings, a resident of 53206, speaks about it now, he talks about “the worst decision of his life.” He was drawn into a lifestyle with “intoxicating freedom” and a chance to earn money for himself. It was doubt in himself that led him down the path.

The 20 years that Hennings spent in prison were part of that process, he said. It helped him realize the truth about his goals, dreams and the strength of spirit he’d need to achieve them.

“I told myself that if I ever got a second chance, I wouldn’t need a third,” he said.

Hennings said one of the main messages from his session will be “unlearning” — as in unlearning bad habits and ways of thinking.

Part of that comes from the messages we get from the outside, he said. He’s intentional about surrounding himself with things that uplift him. He encourages everyone else to do the same.

“Everything I watch, read and listen to says ‘Ed Hennings, you can fly,’” he said. “And I believe it.”

Hennings said fear of failure was a major contributor to people’s unhappiness, and that overcoming it was critical.

The Benefit of Brokenness

For Bridgett Wilder, another summit speaker, adversity is like climbing a mountain. The way to the top is paved with rocky times.

“I’ve never seen any mountain I tried to climb where I benefited from going up the smooth side,” Wilder said. “I always slide right back down because there’s no grip. My brokenness gives me grip.”

Taking a lifetime of trauma and heartbreak, Wilder said she finds a way to spin her life’s trials into a positive. She is founder of Perseverance Health and Wellness, where she provides fitness and wellness tips to clients,

Wilder has faced many hardships. She lost her husband and 6-year-old daughter. She raised nine children on her own. When she was a teenager, she survived sexual assault.

But she has persevered and tried to find ways to heal from the trauma, and helping others see it in themselves.

“Many of us have trauma from childhood that we’ve suppressed, and we’re walking around chopped up, scattered from the inside,” Wilder said.

In her work now, she tries to help people understand the process of healing and recovering from grief. There is no perfect blueprint for it. There is no “timeline for grief.” Helping people navigate the stages and steps of healing is crucial, as it often takes time.

Recovering from traumatic events often helps people get mental clarity and more opportunities because of it, she said. Doing the work and trusting in the process is a major message.

“If you know within yourself that you’re doing okay, that’s what makes you operate authentically and unapologetically,” Wilder said.

Most of all, she tries to share her story to inspire others. 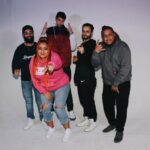