You are here: Home / Home / Carousel / Family with lead-poisoned child: city officials are ‘complicit’
Share this... 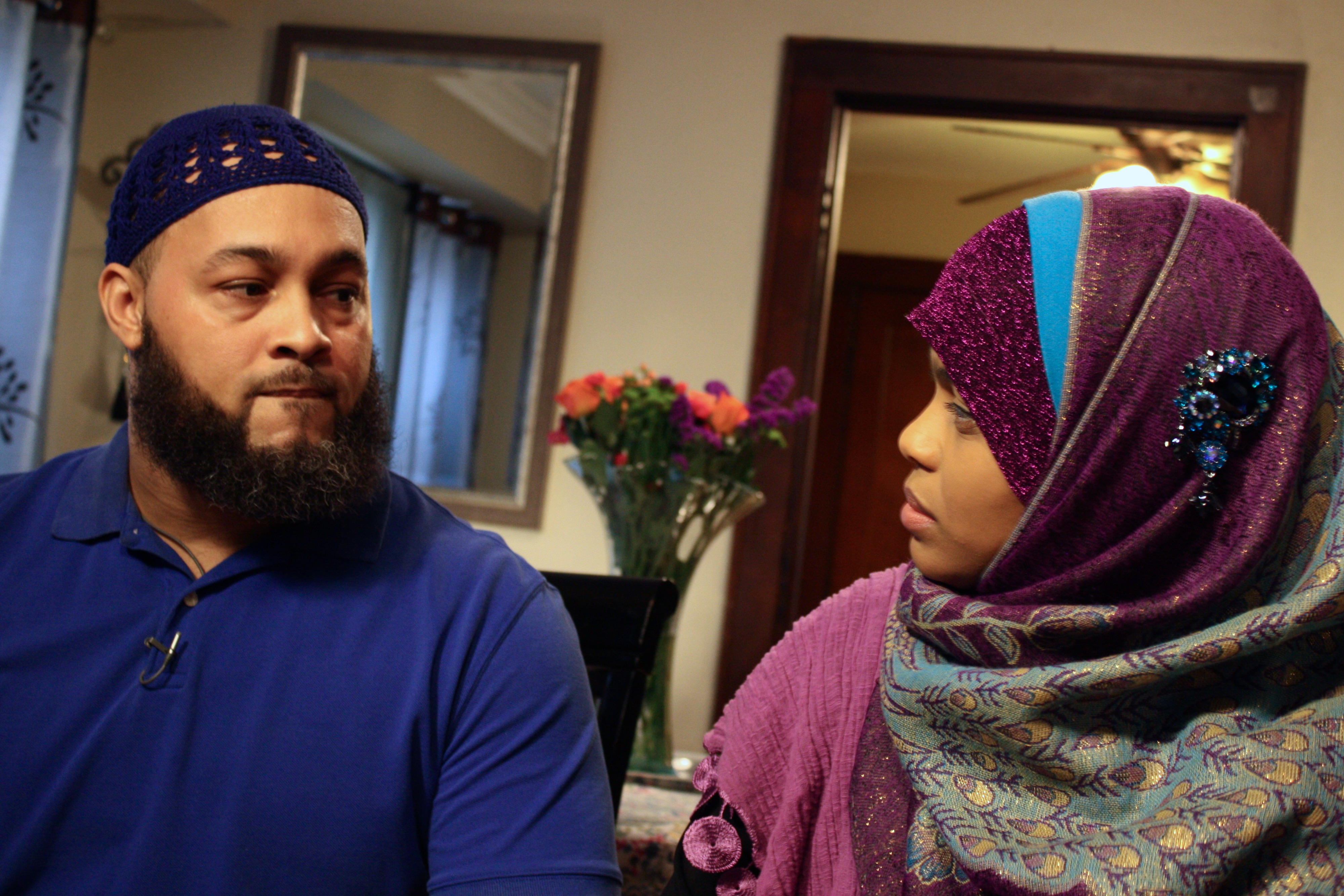 Nazir and Aminah Al-Mujaahid sit in the living room of their North Side home during a recent interview. (Photo by Jabril Faraj)

Shu’aib Al-Mujaahid is a quiet child. The 5-year-old peeks out intermittently, through sunken eyes, from behind his mother, curious at the cameras that follow him. His older brothers Sulayman, 10, and Salahudeen, 12, filter water from the kitchen tap through a ZeroWater filter into five-gallon jugs, used to store clean water for drinking.

In April 2017, Shu’aib tested high for lead in his blood. A finger-prick test showed his blood lead level was 11.4 micrograms per deciliter (µg/dL), more than twice the level of 5, at which the Centers for Disease Control and Prevention (CDC) suggest action be taken. Though a more accurate venous test conducted the following day showed a much lower level of 4.8 µg/dL, the incident brought the issue to his parents’ attention. 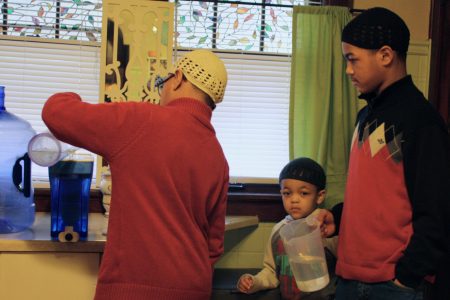 Shu’aib stands in the kitchen of his North Side home as his brothers, Sulayman (in red) and Salahudeen filter water. (Photo by Jabril Faraj)

“Obviously we were very concerned, as we know lead is a poison,” said Nazir, Shu’aib’s father, adding that he and his wife were “shocked.”

Since then, the Al-Mujaahids have taken to filtering all the water they consume. However, Shu’aib’s most recent test, in January, showed that the boy’s level actually increased to 5. “Five is still alarming, period,” said his mother, Aminah. “There’s not supposed to be any lead in his blood system.” Aminah and Nazir said their six other children, all of whom were homeschooled, do not have any lead in their blood.

The family moved into their North Side home, which has a lead lateral service line, in March 2014. Before that, they lived at 4940 W. Vienna St., an address that also has a lead service pipe. However, the home on Vienna had a sophisticated water filtration system. Nazir said the family drank water directly from the tap until Shu’aib’s test in 2017, which was about the time the family learned about the threat of lead water pipes through the Freshwater for Life Action Coalition (FLAC).

Where the lead came from — paint, water or soil — is unknowable, though Nazir suspects it is the water. Regardless, he and Aminah have noticed differences in their youngest son’s behavior, particularly his speech, which Nazir referred to as “delayed.”

Aminah said she and Nazir have done a lot of research “so that we can help our son learn as best he can”; the parents are using Vitamin C, activated charcoal, calcium and magnesium to try and get the lead out of his system. But it hasn’t been easy.

“I feel like it has slowed my son down substantially to where he could be,” Aminah said. “It’s kind of turned things upside down.”

April 2017 was not the first time Shu’aib tested high for lead in his blood. Records of the boy’s lead tests provided by his parents show that he tested at 6.4 µg/dL on Aug. 18, 2014, when he was 2. The test was performed at a Southeastern Pediatrics clinic located at 8532 W. Capitol Drive by a physician who no longer practices there. A medical assistant who assisted with the case was laid off in March 2017 for unspecified reasons, according to a clinic spokesperson.

Nazir and Aminah said they were never informed of the high level, nor did they receive any follow-up information from the care provider or the City of Milwaukee.

Comments on the August 2014 test results read: “Results above Expected Range / mom called pt to have repeat in 1 month with ZPP.” A medical assistant who has worked at the clinic for eight years, explained that ZPP is a test that determines how long lead has been in the blood. However, she had trouble deciphering what the other comments meant.

“I don’t know — it doesn’t really make sense,” she said. “In this case, I’m not sure who spoke to mom or who they thought they might have spoken to.”

According to the medical assistant, a doctor or medical assistant will usually call parents to inform them of an “abnormal” test, when to follow up and what other testing should be done. Regarding this case, she said, “I’m really not sure what happened there.”

There was no immediate follow-up test performed, according to the records. The next test, in September 2016, measured Shu’aib’s blood-lead level at 3.7 µg/dL.

The confusion is not limited to medical providers, but extends to the city’s efforts, as well.

In an email communication early this year, city officials first offered to test the water at the Al-Mujaahid home, then denied knowledge of the offer. Ultimately, in an email sent to Nazir on April 18, after Milwaukee Neighborhood News Service asked about the exchange, MWW spokesperson Sandra Rusch Walton reiterated the offer for MWW to test the water, and offered the alternative of having the test done at a private lab.

Late last year, the Common Council unanimously passed a resolution that requires the Health Department to be more transparent about the health effects of lead and what it is doing to inform the public of those risks. Initially, MHD claimed it had been doing what the resolution called for all along, and then delayed implementing any of the changes. Until recently — with MHD under a new commissioner — there was no evidence that the department had begun implementing the steps called for in the resolution.

On April 8, FLAC spokesperson Robert Miranda sent an email to 12 alderpeople expressing dissatisfaction that the measure, which he and other activists pushed for, was not being implemented. Miranda received no response. After Milwaukee Neighborhood News Service asked MHD about the email on April 16, the Health Department issued a press release that said it is “sounding the alarm to all Milwaukee residents that no level of lead in the water is safe.”

This message appears to contradict Mayor Tom Barrett, who at a recent news conference blamed lead paint for the high levels of lead poisoning in Milwaukee, and implied that lead service pipes are not a factor.

Michael Carvan, a professor at the UWM School of Freshwater Sciences, and pediatrician Earnestine Willis, director of the Medical College of Wisconsin’s Center for the Advancement of Urban Children, both said it is virtually impossible to determine the source of lead exposure unless a particular case is examined and even then it can be difficult to tell, “unless you can find paint chips in the child’s feces,” Carvan said. Willis added there is no test that differentiates between sources.

Neither Barrett nor anyone from his office or the Health Department was available to participate Saturday in a series of panel discussions on lead poisoning aired on Milwaukee PBS and produced in partnership with NNS and WUWM. Instead, Barrett agreed to an on-camera interview, but canceled about an hour before it was scheduled.

Nazir Al-Mujaahid said the city’s response to this issue, and his son’s case specifically, has been frustrating. He said, no matter the primary source of lead, Barrett and the city have not done enough to take responsibility for the issue and educate people so families and individuals can protect themselves.

“I think they’re complicit,” he said, of the administration.

And Willis said people need to stop pointing fingers. “It’s time for everyone to own the problem and get to doing something about it.”

Ald. Tony Zielinski, who is running for mayor in 2020, recently introduced a resolution that would provide $1 million “for the purchase of lead-removing water filters and expansion of the City’s lead safety educational campaigns”; the Finance and Personnel Committee will consider the measure at the beginning of May. A proposal by Zielinski to create a task force that would develop a comprehensive lead poisoning plan has been put on hold, according to the alderman. He did not say why.