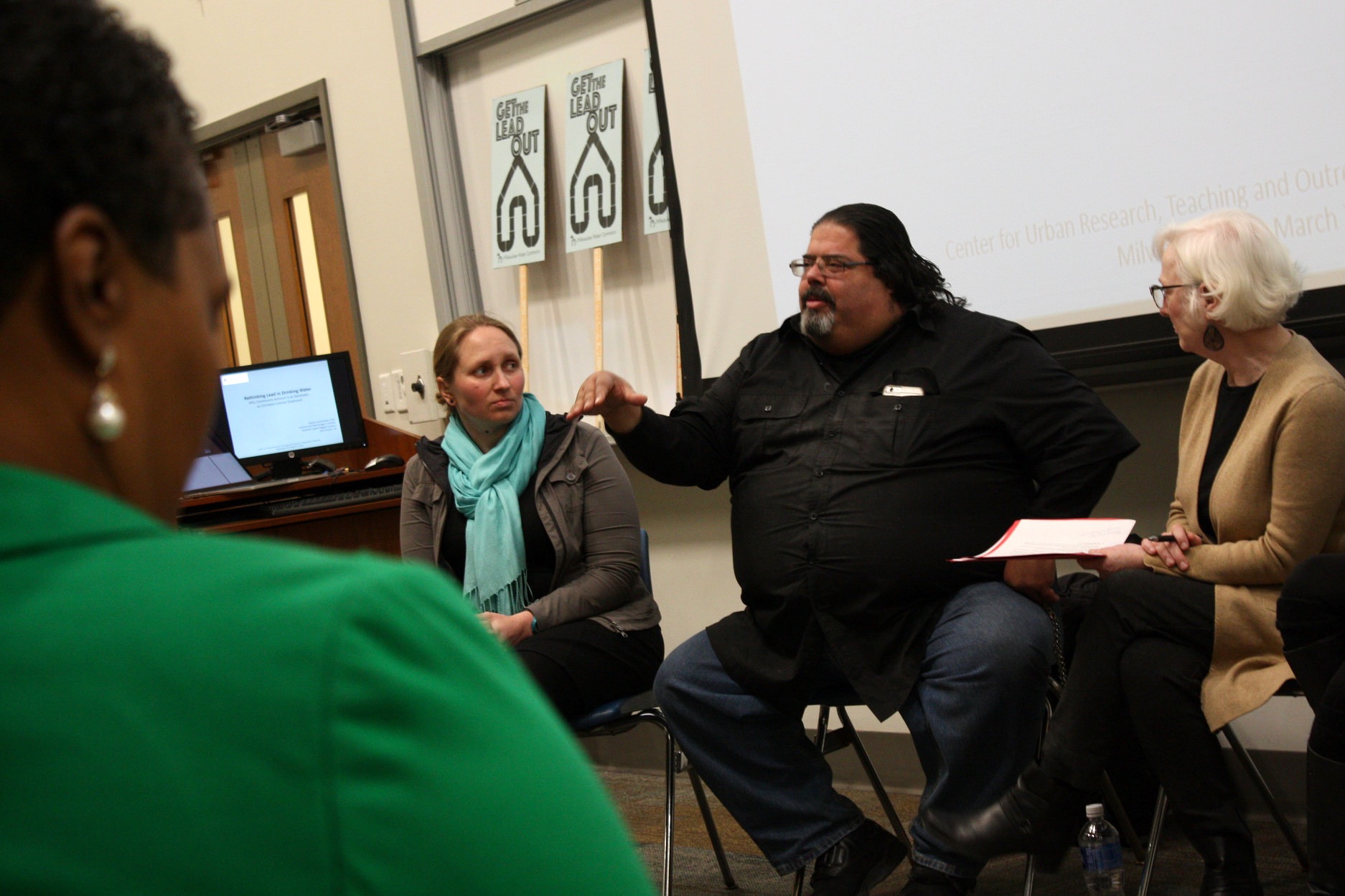 Ald. Tony Zielinski will introduce a resolution in the coming weeks that would create a task force to produce a comprehensive plan to combat lead poisoning. Zielinski joins other aldermen, Interim Health Commissioner Patricia McManus and representatives of community-based organizations, who have previously called for such a plan.

Supporters said the plan must include strategies to educate residents about the risks of lead poisoning through paint, water and soil, as well as more aggressive efforts to distribute water filters and ensure children are being regularly tested. The plan would set a timeline to achieve specific goals, including replacing lead service pipes that currently deliver water to more than 70,000 city homes.

In the meantime, activists and city officials have said filters need to be made more widely available, particularly for families that can’t afford to buy one. They also said continued outreach to educate people is essential.

The City of Milwaukee and Milwaukee Health Department have, over the last few years, been criticized by community advocates for communication they say was not straightforward or honest. Representatives of community-based organizations, including Kirsten Shead, co-chair of Milwaukee Water Commons’ drinking water initiative, said it is time to admit that lead in water is a problem and get more aggressive about addressing the issue.

“We could actually just step out and lead on it. We could just own it, say, ‘This is happening all across the country, we’re going to find a solution and we’re going to take all this energy … and just look at the issue straight on,’” said Shead, at a recent panel hosted by Marquette University. “We’ve dealt with complicated, expensive problems before.”

Ald. Jim Bohl, who chaired the Water Quality Task Force, said if the aim is to be comprehensive, the plan should address lead in food. A June 2017 report by the Environmental Defense Fund showed that baby food, particularly fruit juice, is a “meaningful” source of lead exposure. It estimated the societal benefits of eliminating lead from these foods at more than $27 billion annually. 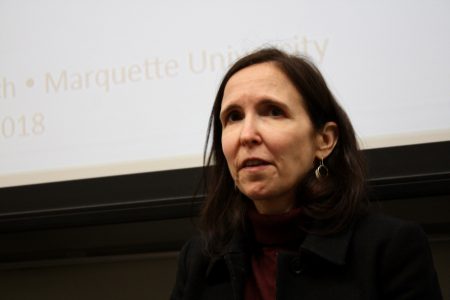 Yanna Lambrinidou, a national lead-in-water expert and activist, speaks during a panel at Marquette University. (Photo by Jabril Faraj)

“What comprehensive means to me is overturning all the rocks, not just the three that somebody told me are the rocks,” he said.

Bohl added that the task force model can be lengthy and bureaucratic. He suggested that a more informal “working group” may be more efficient and effective.

Zielinski said his office is working on the legislation and he plans to introduce the measure at the next Common Council meeting, on March 27. Once referred to committee, it would most likely be heard in April or May and, if approved, would go back to the full Common Council for a vote.

Proponents have said the city’s Water Quality Task Force report, released in April 2017, would be a good place to start. The report lists 20 recommendations to make drinking water safer, including that the city “do all in its authority to accelerate the removal and/or rehabilitation of lead service lines.”

The Health Department declined to comment for this story. McManus and Common Council President Ashanti Hamilton did not respond to questions regarding whether they support the measure.

“It needs to be a community-based planning process,” said George Olufosoye, state director of Next Gen America, a group that advocates for environmental responsibility. Olufosoye said young people and residents “who are directly affected” need to be involved in the planning, and that elected officials and other “key players” who are not engaged in this conversation also need to be at the table.

“Until we have buy-in at the top level, we’re not going to see much change,” he added.

Shead and other panel members agreed that, “we can’t dig up our own pipes.” They said the city — which encouraged the use of lead for service lines since 1872 and mandated the use of “extra strong lead pipe” from 1921 until it banned lead pipes in 1962 — should be responsible for replacing the hazardous infrastructure. They remain confident that the money can be found, even if the city doesn’t have it right now, but city officials, including Bohl, have continued to say accelerating replacement is simply not possible.

“They (the city) obviously knew there was a problem (when lead lines were banned),” said Robert Miranda, spokesperson for the Freshwater for Life Action Coalition (FLAC). “So, why are they saying that we (residents) own these pipes now? Because they don’t want to pay for their mistake.”

However, even if all lead service lines are replaced, many homes likely have interior plumbing made of lead. And, Yanna Lambrinidou, a national lead-in-water expert and activist, pointed out that, even today, plumbing materials are not completely lead free, adding that, “We need to rise up and demand that new plumbing has zero lead in it.” Kweku Akyirefi, a child psychologist who has worked with children at Milwaukee Public Schools and in the Department of Corrections, lamented the generations that already have been lost.

“It’s just a matter of a commitment,” said State Sen. Lena Taylor, who also attended the panel. “Power concedes nothing without a demand. It never did, and it never will.”

Community groups will continue to push officials on this issue, representatives said. FLAC is continuing its research into lead infrastructure; representatives from Milwaukee Water Commons will be attending events at churches and schools to educate residents; and Sixteenth Street Community Health Centers is hosting lead workshops across the city.

“We are moving into the community with solutions; we’re moving forward with protecting our communities,” Shead told the audience at Marquette. “Come and join us — get on board — because we are going to be on the right side of history on this.”