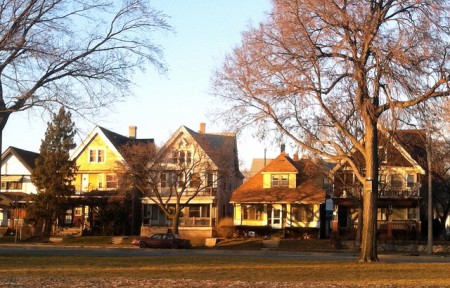 Houses on Lloyd Street, across from Washington Park. (Photo by Andrea Waxman)

After watching Milwaukee’s Washington Park neighborhood “disintegrate in a lot of ways” since he moved there more than 40 years ago, Mike Howden is optimistic about the community’s future.

“It’s been very sad to see things change so much. When we first moved here, there was neighborhood shopping, including grocery stores and dime stores, and none of that exists at this point,” said Howden, who moved to 40th Street across from the park in 1981. However, Howden pointed out that good things have happened and are happening now.

He and other residents, business owners, organizations and community development agencies, working together as Washington Park Partners, are beginning to implement a new five-year Sustainable Community Plan, which they developed over the last year and a half.

LISC (Local Initiatives Support Corporation), a facilitator of the planning process, defines sustainable communities as places where residents of varied incomes have the opportunity to build assets, participate in their communities and become part of the mainstream economy.

The new plan for a sustainable Washington Park focuses on seven core areas, each with its own committee and detailed action steps. The seven are: 1) housing; 2) arts and culture; 3) jobs and business; 4) education; 5) the park; 6) health and wellness; and safety.

For each core area, the plan lists action steps and detailed sub-steps. The plan assigns a specific time period, team of lead agency and partners, and performance measure to each action step.

For example, the housing committee’s initial goals include: demolishing half of the vacant structures that are a hazard (the second half will be demolished in 2013); commissioning a market study to determine the need for senior housing; and developing housing for homeless individuals with on‐site supportive services at 35th and Lisbon. 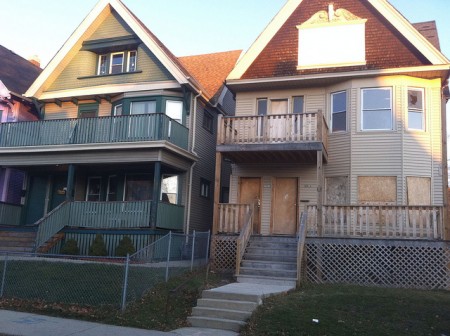 Boston pointed out that housing development can stimulate other improvements. For example, affordable housing initiatives such as Toussaint Square and Columbia Square on North Avenue, and construction of six town homes on 39th Street by United Methodist Children’s Services helped stimulate the Urban Ecology Center in Washington Park.

Howden and his wife serve on the health and wellness committee, among other activities. They are particularly concerned with bringing healthy food into Washington Park, which Howden says is a “food desert.” During 2012, the committee plans to offer cooking demonstrations that encourage residents to prepare healthy foods; promote a Vliet Street Green Market; promote gardens and gardeners in the neighborhood; and create and sustain a SHARE Mobile Market. SHARE is a non-profit food-buying club for healthy, affordable food.

Lack of jobs is the main challenge facing Washington Park residents, according to business owner and professional community advocate Teig Whaley-Smith. “The primary reason that we have all of these other problems is because of the issue of poverty and people not having job opportunities,” he said. For that reason, the plan is based on building a neighborhood that is healthy in a multi-faceted way “so it becomes an attractive place for businesses to locate, for people to make investments and, for people who are already working, to move into the neighborhood.”

Whaley-Smith, an attorney and consultant operating his own business in the neighborhood, serves as sustainable communities director for Washington Park Partners. He grew up in the community in the 1980s and is upbeat about the improvements that have taken place there since then.

After completing his education, Whaley-Smith decided to move his family back to Washington Park. The high level of commitment of all of the parties now working in the neighborhood has softened many of the challenges he faced growing up, he said.

“When I was growing up in the neighborhood, there were many more abandoned buildings. We didn’t have organizations like United Methodist Children’s Services (Washington Park Partners’ lead agency) or the Urban Ecology Center or Progressive [Community] Health [Centers] clinic [on Lisbon Avenue] or all these other people that are doing great work in the neighborhood.” Gangs were prevalent then and “we didn’t have Westside Academy, Our Next Generation and all of these people working with young people.”

He added, “There are days, already, when I think you would be crazy to be living anywhere else.”