You are here: Home / News / Arts and Recreation / Coach works to revive baseball on south side
Share this... 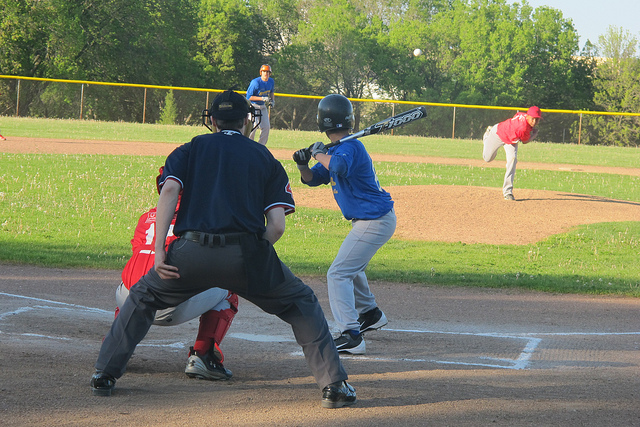 Julian Haliga paces along the first base line, watching as his batter stares at ball after ball. Finally, a pitch near the strike zone, and the kid takes a hack. The pitch is outside, and the batter tries to pull it. The ball rolls slowly towards the left side of the infield for an easy out.

“You can’t swing at outside pitches like that, you got to hit them differently!” the coach shouts.

Haliga’s team has run up what seems to be an insurmountable lead by the fifth inning, and though he relaxes a little, he doesn’t take his gaze away from the diamond. He doesn’t miss a play or a chance to teach.

Haliga is coach of the Milwaukee South Side Baseball Club, a team he founded in 2010. The team plays in the Felix Mantilla Little League, which includes 22 teams and is run by the United Community Center (UCC), 1028 S. 9th St. Nearly all the players on the south side club are Latinos, between the ages of 13 and 15.

Haliga has been coaching youth baseball for more than a decade, starting when his kids became involved in the sport.

Last year, his club was one game away from the championship. “It’s the farthest that a Mantilla league team has ever gotten,” Haliga said.

He points to the outfield walls of the baseball diamonds at Baran Park, 2600 S. Chase Ave., where the league has been playing since the 1980s.

“There’s no championship banners out there, not even one; you go to the parks in the suburbs and there’s banners all over.”

Once the league’s teams enter tournament season in the summer, they’re competing against suburban teams with more resources for training, equipment and even paid coaches.

Suburban teams also have a bigger pool of players to choose from.

In the city of Milwaukee, baseball is no longer the popular sport that it was in the 1960s, ’70s and ’80s. Back then, baseball was played on park diamonds, alleys, streets and open fields of grass.

“Baseball used to be all day every day,” said Rick Peck, a volunteer coach for the league, who grew up in the city.

Peck, whose son plays for Haliga’s team, has spent most of his life around the game, playing college ball in central Florida where he pitched and played outfield. He also played with the Rock River and Land O’Lakes leagues in Wisconsin.

He teaches at the Milwaukee School of Languages, and brought his son to play in the Mantilla League rather than a suburban league because he felt that the cost of youth sports had become excessive, effectively pricing out kids from the city.

Major League Baseball officials have known for quite a while that baseball has been struggling in urban areas, largely due to the expense of the sport. The league created the Reviving Baseball in Inner Cities program, known as RBI, to increase opportunities for inner city kids to play ball. 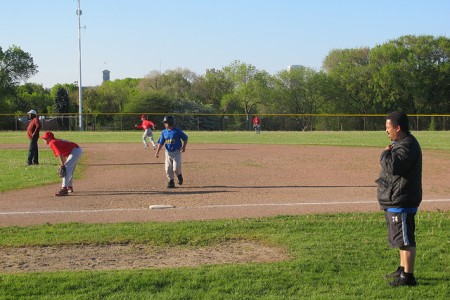 In Milwaukee, RBI sponsors a little league run out of the Boys and Girls Club at 3000 N. Sherman Blvd. on the north side.

The Mantilla league is sponsored by the Brewers Community Foundation, whose focus is on helping low-income and disadvantaged youth and their families, according to its website.

This year, Milwaukee Brewer stars Yovani Gallardo and Alex Gonzalez donated $15,000 to buy all the jerseys for the league on behalf of the foundation. The charity also donates funds for upkeep of the playing fields and improvement the baseball facilities at Baran Park. One year, the charity contributed $20,000, though this year the total was closer to $8,000, according to Jerad Luedtke, vice president of the Mantilla league.

The $40 the league charges its players doesn’t cover the actual costs. The players sell candy, while Haliga, his coaches and the players’ parents hold fundraisers and seek sponsors among area businesses to help defray the cost.

UCC, with contributions from donors and the sign-up fees, provides the rest of the funds to run the league, and also pays for vans for travel to tournaments. It also makes up any shortfalls, Luedtke said.

Though it’s affordable, Haliga said that the city has “terrible baseball. There’s not enough training so it’s not competitive.”

Still, Haliga is passionate about closing the gap between city and suburban baseball teams. He wants his players to go to college, and he knows that a player can make that affordable for his family by receiving an athletic scholarship to play baseball.

When teams are able to invest in equipment and training for the players, it pays off. Last year, Haliga’s team was able to train some of his players at R.J. Fergus Hitters Baseball Academy in Racine. The Academy is a 20,000-square-foot, full-service sports training facility. It’s the premier baseball-training academy in the state.

“When we came back, we were the best team in the city,” Haliga said. This year, 40 kids from the Mantilla League will be heading to Hitters for more training. The camp is expensive but R.J. Fergus gave the league a sizable discount, knowing he’d be helping players from the inner city participate, according to Haliga.

The camp fees will be paid with money from fundraisers, which also help the teams purchase equipment. Haliga’s team, which has accumulated thousands of dollars worth of baseball equipment, is at the top of the division.

“Last year we traveled to the Dells, stayed in a hotel and all the families cooked out together,” said Vicky Campbell, whose son Dezmen pitches and plays first base. The player’s families pay for their hotel rooms and pitch in for food.

While the families build bonds with other families, the players are building camaraderie of their own.

“I like being out here and playing baseball with the other guys,” said Andrew Tapiz, a catcher.

His time with coach Haliga has helped him improve his baseball skill set, Tapiz said. “He knows everything about hitting; he’s an amazing coach who understands his players and has taught me everything I know.” Tapiz will leave the team soon to play for the baseball team at St. Thomas More High School.

Back on the field, Haliga yells to his right fielder, after his attempt to throw out a runner at the plate came up woefully short: “Don’t throw the ball like that. Always hit the cut-off man.”

Haliga is not a paid coach. He works full-time as a mortgage insurance adjuster, waking up each morning at five-thirty and getting to work at seven.

An hour after clocking out, he’s at the park. Some weeks, he coaches every day.

Though he’s intense, he laughs and jokes often with his players, some of whom play and train year-round. According to Haliga, players need year-round training to realize their potential.

Two of Haliga’s players were chosen to play for the R.J. Fergus Hitters traveling team, a showcase squad. Nearly all of the players on the Hitters squad end up playing college ball, according to Haliga.

He doesn’t mind sending his best players to the traveling team because he knows that it will benefit them, as well as his team, in the long run.

After the team made it to the championship game last year, Haliga sat his team down to explain what they had just accomplished. “Even if you’re disappointed that we lost,” the coach said, “this should be the best bummed-out feeling you ever had.”