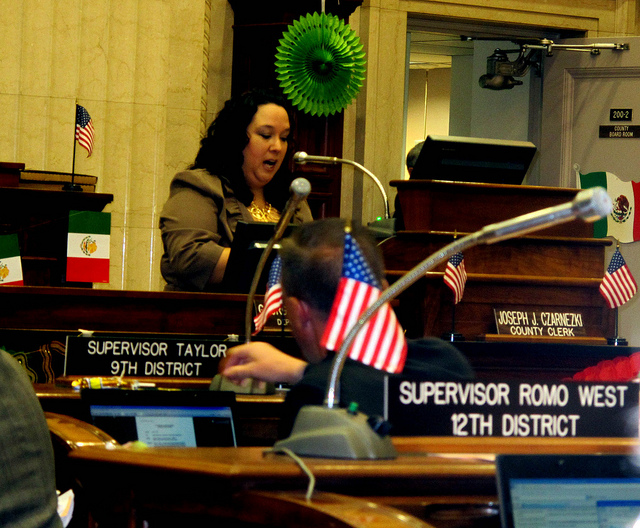 Peggy West, county supervisor for the 12th district, speaks to the board. (Photo by Edgar Mendez)

Immigrants in Milwaukee who are detained for non-violent offenses will no longer be subject to additional Immigration and Customs Enforcement (ICE) investigations, following the passage of Resolution 12-224 by the Milwaukee County Board of Supervisors.

In a victory for the immigrant rights group Voces De La Frontera and its supporters, the county board passed the resolution, championed by 12th District County Supervisor Peggy West, by a vote of 14-4.

The resolution directs Milwaukee sheriffs to decline ICE detention requests unless they involve persons who have specific kinds of criminal records (such as felony or non-traffic misdemeanor convictions, for example), are criminal defendants or have outstanding criminal warrants, or are suspected of gang or terrorist activities.

Currently, the Milwaukee County Sheriff’s Office (MCSO) honors all ICE detainer requests. Sheriffs are asked to place a hold of up to 48 hours on an inmate to allow ICE to investigate whether that person should be processed for deportation.

Supporters of the resolution argued that detainer policies are harming families and that even those guilty of only minor traffic offenses are being deported. 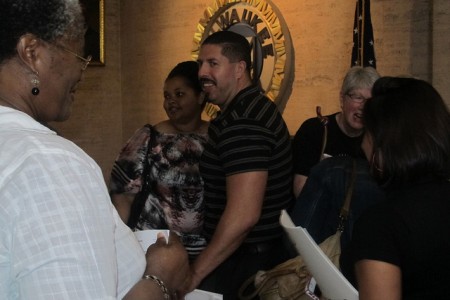 Voces president, Primitivo Torres (center) celebrates with supporters outside the board room after the vote. (Photo by Edgar Mendez)

“The vote was a good step in keeping families together here in Milwaukee; these hard working people are non-criminals and pose no threat to society,” said Primitivo Torres, president of Voces.

Supervisor Deanna Alexander of the 18th District, one of four board members who voted against the resolution, said she couldn’t support it because it amounted to failing to cooperate with ICE.

County Executive Chris Abele, who had previously threatened to veto the resolution, said that it would have no practical effect because ICE detainers are federal law, and thus would not be impacted by local policies.

The 14 votes were enough to make the resolution veto-proof.

West disagrees with Abele’s interpretation, saying that the detainers from ICE are not mandatory, but are simply requests.

She said that passage of the resolution would save the sheriff’s department money. Its budget has been cut $14 million this year. West added that some counties in Arizona have adopted a similar policy.

Supervisor David Bowen (10th District), who also sponsored the resolution, said that the measure helps protect the working class and the poor.

“We’re here to do what’s right; we should be pursuing cases that are worth the time,” Bowen said.

About 20 supporters of the resolution, included many from religious groups, attended the hearing.

Joyce Ellwanger wore a black Milwaukee Inner-city Congregations Allied for Hope (MICAH) shirt and held a sign in support of the measure.

“We are all immigrants and need to be treated with equity rather than punitively.”