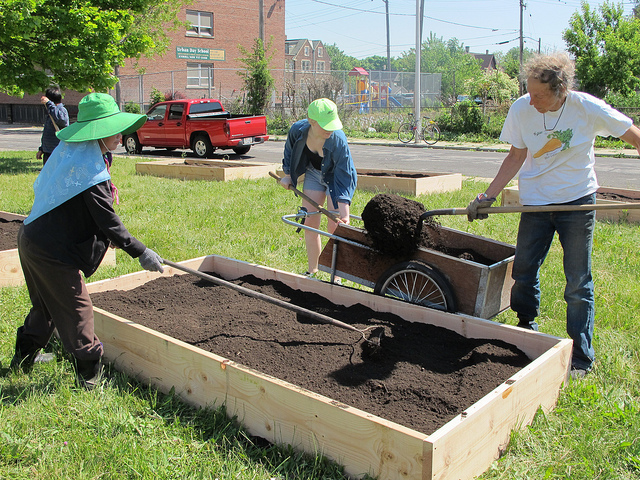 Imagine being able to walk out your door or down the block to pluck plump red tomatoes fresh from the vine, crisp sugar snap peas, organic lettuce, baby bok choy, sweet carrots or spicy radishes.

Victory Garden Initiative’s fourth annual “blitz” made this possible for many Milwaukee residents when 300 volunteers installed nearly 300 raised-bed gardens throughout the city.

Victory Garden Initiative builds communities of people who grow their own food. The organization envisions “a Milwaukee where in the [growing] season every person – not just people with resources – has access to fresh… fruits and veggies,” said Executive Director Gretchen Mead. “We really could make Milwaukee a harvestable city.”

The 4-foot-by-8-foot gardens usually cost $150 and are made of untreated lumber filled with one cubic yard of Purple Cow Organics soil. It’s a simple, replicable structure, which makes installation possible with volunteer labor. 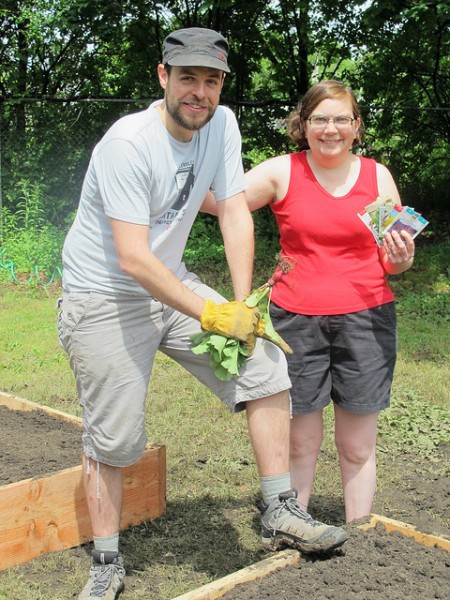 Each garden should produce $400 worth of food in a season – “if you know what you’re doing,” Mead said. Victory Garden Initiative has created a Garden Mentor Program to help educate new gardeners.

Mead founded the organization and coordinated the first blitz in 2008 after witnessing the negative impact of the industrialized food system on the vulnerable people she worked with as a social worker. “There are many, many issues our society is facing [that] can be responded to with food, from basic things [such as] ‘let’s turn off the TV and get outside more and meet our neighbors’,” she said.

The garden, used by six parish families, was a collaborative effort among the Green Team, the school and Nehemiah Project, a neighboring organization at 2506 W. Vliet St., which installed three raised beds to grow fresh ingredients for salsa and hot sauce used in a jobs program.

Chao Y. Lor was one of the volunteers who installed the gardens, along with Richards and about 10 other Victory Garden Initiative volunteers. Lor’s sister’s family is one of two parish families who will use the raised beds.

Some of the same volunteers braved the rain a few days later to install three gardens in the Martin Drive Community Garden on 46th Street, bringing its total number of raised beds to 11. Four are used for growing food that anyone in the neighborhood may eat.

Steve Falsetti, a Martin Drive resident and third grade teacher at Victory K8 School for the Gifted and Talented, spearheaded the effort to build the garden after moving to the neighborhood in 2008.

“It has become a center for neighbors to orbit themselves around,” he said. Neighborhood kids have helped to plant, move wood chips and build beds. The garden is home to an annual picnic and last year a white sheet hung on the fence became a movie screen for nighttime entertainment.

Clegg lives in an apartment that doesn’t have adequate gardening space but grew up with a dad who was an excellent gardener.

“I enjoyed having [a garden] because [food] was fresh and you could get [it] right away,” she said. “It’s an accomplishment. It’s fun to watch things grow,” she added before getting to work on her garden.