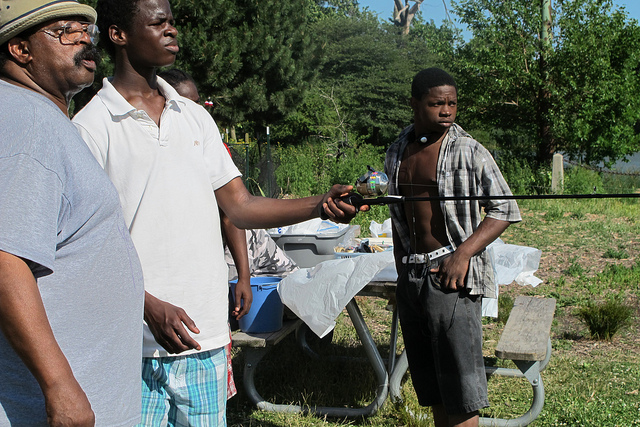 It’s a sweltering summer day, and E.B. Garner is wondering if anyone will brave the heat to show up for the bi-weekly fishing club he founded and hosts at Washington Park Pond just outside the Urban Ecology Center.

Gradually, a handful of youth gather at the pond.

Ajalae Adams, 12, a seventh grader at Whitman Middle School in Wauwatosa is the first to arrive, with her grandparents, Stephanie and Kevin Hardison. She wants to learn to fish, and “grandchildren always prevail,” says Kevin Hardison.

Garner, who buys all the equipment with his own funds and with some donations, walks his new students through the basics.

Emphasizing the pole’s straight path in a cast, he says, “It’s just like shooting a basketball.” Using a giant demonstration hook, he warns about its sharpness and shows how to tie the line to it. 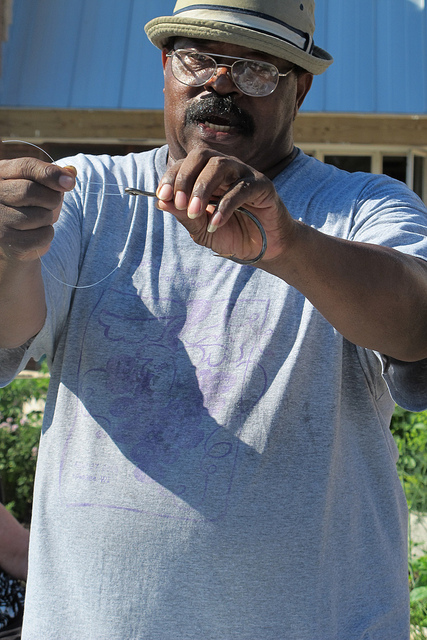 E.B. Garner demonstrates how to tie a line to a fishing hook at Washington Park Pond during his fishing club. (Photo by Jennifer Reinke)

For the first couple rounds, he baits the participants’ hooks with plump nightcrawlers. After that, they’re on their own. That’s Garner’s system.

“A dollar to the first fish,” says Garner. Seconds later, Stephanie Hardison is reeling in the first catch of the day.

Ironically, Garner grew up near a river and had to eat fish every weekend, so now, he said, “I don’t eat fish period.

A certified angler and retired county parks employee, Garner started the club 15 years ago after promising a neighbor boy he’d teach him to fish if his grades and behavior improved. His own grandchildren also had been begging him to take them fishing. What started as a group of 12 quickly grew.

He recalled one girl, about 7 years old, who showed up at 9 a.m. and fished all day long. Just before 4 p.m., she caught her first fish. Garner knows she’ll succeed at fishing because she had “so much patience,” he said.

“That little girl did a dance I never seen before.”