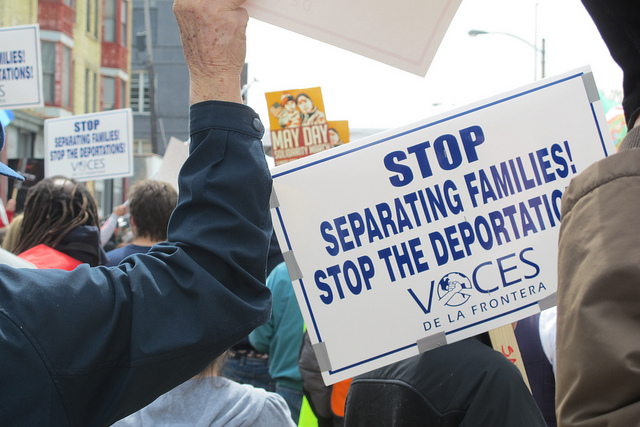 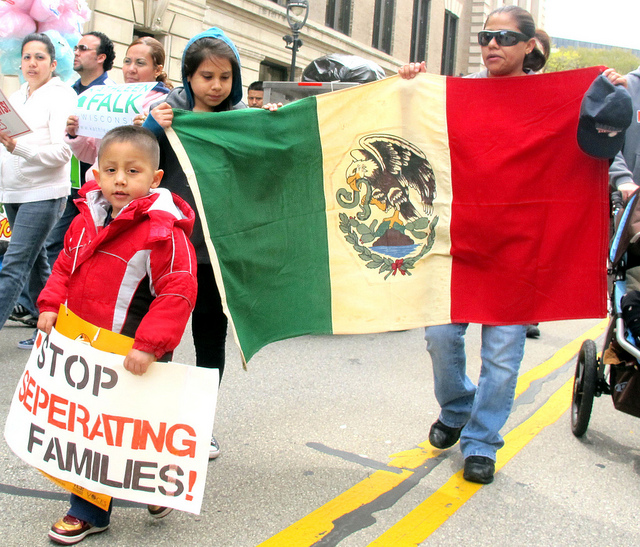 The last time Hector Arenas had any contact with law enforcement officials was when he was 22. Fifteen years later, he was removed from his home by immigration officers and deported to Mexico, leaving behind five children and their mother. Read more

On the second Tuesday of each month, an overflow crowd of men, women and children fills the headquarters of Voces De La Frontera for the New Sanctuary Movement’s “Circulo De Apoyo,” or “Circle of Faith” meeting.

Nancy Flores leads the New Sanctuary Movement (NSM), part of a nationwide coalition of faith-based groups that support immigrant families affected by deportation since the inception of the Secure Communities program in Wisconsin.

“The program focuses on helping families whose loved ones are in the middle of removal proceedings. We’re called by our faith to help people and children who are facing separation due to a system that’s broken,” Flores said.

They begin each meeting with a prayer. However, soon after it devolves into a series of heart-wrenching flashbacks to the day their loved ones were taken into custody or deported, the state of their legal battles or the struggles that their lives have become ever since. Usually it’s all three. Some cry as they speak, and most talk about feeling traumatized by the experience.

These are the families of some of the 119 undocumented immigrants from Milwaukee County and 466 from Wisconsin taken into immigration custody and deported under the federal Secure Communities program between Jan. 11, 2011, and April 30, 2012, when data were last made available.

In January 2011, Wisconsin joined 36 other states participating in a program that aims to protect communities by removing immigrants who pose a threat to the public. The program is expected to be nationwide by 2013, according to ICE.

Gail Montenegro, spokeswoman for ICE, said that agency’s highest priority is to remove individuals who pose a danger to national security or a risk to public safety.

“ICE prioritizes its enforcement in the following areas: Criminal offenders and national security threats and recent illegal border crossers, egregious immigration law violators, such as those who have been previously removed from the United States, and fugitives from immigration court,” wrote Montenegro in an email. 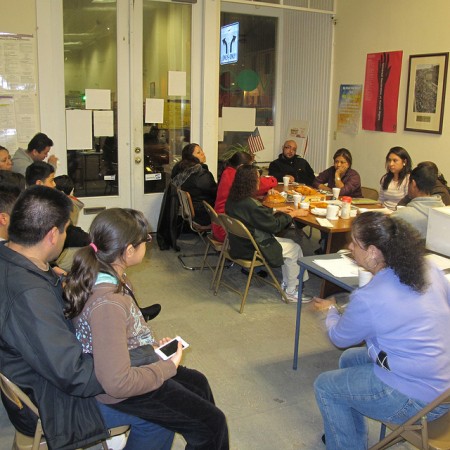 However, critics of the program say that it repeatedly targets immigrants who pose no threat to society, have not been arrested or convicted, or who have been arrested only for minor violations such as traffic offenses.

Flores said if the program were implemented correctly, only high-priority criminals would be deported.

Many of the members of the New Sanctuary Movement claim their loved ones had never been in trouble with the law. In fact, government data show that 34 percent of individuals deported from Milwaukee County had no criminal record, lending credence to the claims.

In her email, Montenegro wrote that in 2011, 55 percent of all individuals removed by ICE were convicted criminals, leaving 45 percent who had no criminal record.

However, Montenegro defended the program, saying that immigrants who are not classified as convicted criminals still may be deported for other reasons. For example, they may be immigration fugitives with an outstanding deportation order, or have illegally re-entered the United States after a previous deportation.

“The majority of the non-criminal immigration violators (about 68 percent) are individuals who illegally re-entered the country after having been deported, which is a federal felony. They just have not been federally prosecuted for it,” Montenegro said.

Convicted criminals who can be deported as a result of the program are classified into three levels, according to a memorandum of agreement between the U.S Department of Homeland Security and ICE:

Of the 65 percent deported from Milwaukee who did have a criminal record, most had been convicted of Level 3 offenses. In Wisconsin, 46 percent were convicted of minor offenses; nationwide the figure was 40 percent.

Although Montenegro denied that detainees are being deported for minor crimes such as traffic stops, she acknowledged that ICE is adopting a new policy regarding minor traffic offenders.

Going forward, individuals arrested solely for minor traffic offenses, who have not been previously convicted of other crimes and don’t fall within any other ICE priority category for deportation, will only be detained after a conviction, according to Montenegro.

Flores says that the program leaves a lot of gray areas and many people are being deported who shouldn’t be. “A lot of people who come through have not been charged with crimes and do not pose a ‘threat to society’ in the definitions we are given,” she said.

Only 28 percent of convicted individuals deported from Milwaukee were classified as Level 1, compared to 36.7 percent nationwide.

Individuals are targeted for deportation using a complex combination of advanced technology and data-sharing tools intended to identify aliens in federal, state or local custody (or at-large), who have been convicted of serious criminal offenses or have immigration violations.

The system identifies people to take into custody. If a suspected undocumented immigrant already is in custody, enforcement officials check the database to see if the individual has been identified by ICE for deportation.

The Milwaukee County board recently passed legislation ending ICE detainers for non-criminal immigrants or those who’ve been accused or convicted of non-violent or minor crimes. Consequently, enforcement officials no longer will hold immigrants in custody to be processed by ICE unless they’ve been convicted of, or are wanted for, a serious crime, among a few other circumstances.

Flores said she is unsure about what impact the legislation will have. The key, she explained, is how it’s implemented.  If it’s done correctly, then only high-priority criminals should be deported, Flores noted.

She added, however, that ICE has not yet sought to compel compliance through legal proceedings.

In Wisconsin, 203,000 names have been submitted to the database, with 3,628 matches (1.8 percent). About a quarter of the submissions to the database originated from Milwaukee County, with 3.4 percent resulting in matches. 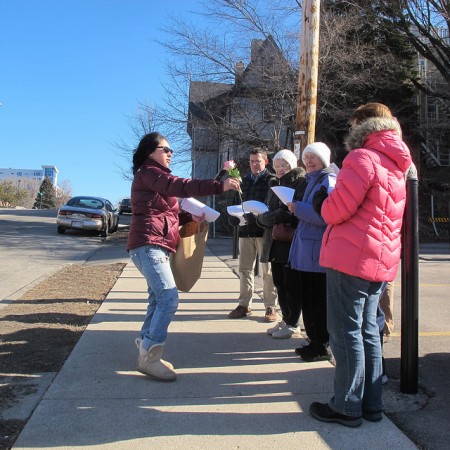 Nancy Flores, leader of the New Sanctuary Movement at Voces, hands out roses during a monthly vigil for families of the deported, across the street from Milwaukee’s Immigration and Customs Enforcement Office (ICE), 310 E. Knapp St. (Photo by Edgar Mendez)

So despite the high volume of submissions, very few people are actually identified as eligible for deportation. For those who are, ICE issues a detainer, and proceedings begin to determine whether the individual should be removed, according to Montenegro.

Critics of the program argue that it discourages undocumented immigrants from reporting crimes to the police, for fear of deportation for themselves or loved ones. Flores said that many in the community view the Secure Communities program as an unholy collaboration between police and immigration officials.

Montenegro said ICE has developed a new policy designed to protect witnesses and victims of domestic violence or other violent crimes. However, policy changes won’t help the members of the New Sanctuary Movement who meet every month. They’ll continue to talk about a son who was detained on his way to cash his first paycheck or a husband who was gone when his wife came home at 11 a.m.

They’ll talk about what brought them to America. They’ll say it was for their children. Some will speak openly about their pain, while others thumb nervously at pamphlets, minds seemingly thousands of miles away.

Said Flores, “They come here to not feel alone.”