You are here: Home / Home / Carousel / New Urban Ecology Center ‘big shot in the arm’ for Valley
Share this... 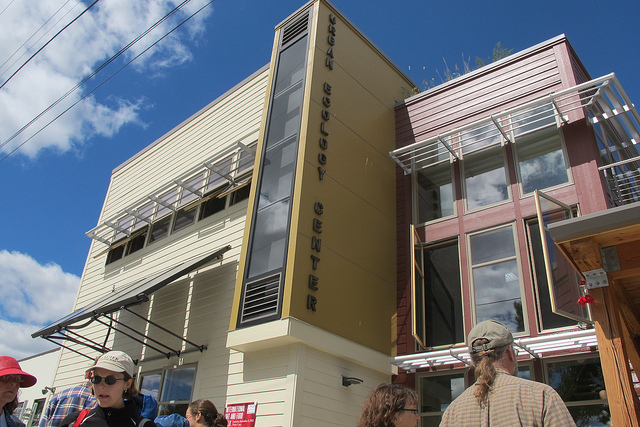 The new Menomonee Valley branch of the Urban Ecology Center is located at 3700 W. Pierce St. in Silver City. (Photo by Edgar Mendez)

Less than a year after breaking ground, the Menomonee Valley branch of the Urban Ecology Center (UEC), 3700 W. Pierce St., is open to the public. The center is part of a major transformation taking place in the Silver City neighborhood.

Just 10 years ago, Silver City was rife with shuttered storefronts along West National Avenue. Outdoor places for residents to congregate and children to play were few and far between. But things have changed.

The two-floor, 6,500-square-foot center, built on the lot of an old tavern, features classrooms and a green roof among other amenities, but its main asset is the natural environment that surrounds it.

Laura Bray, executive director of the Menomonee Valley Partners (MVP), calls the center the door to the Valley, opening up countless opportunities to play and learn hands-on about nature.

Bray sees parallels between her experience growing up in the Riverwest neighborhood with that of children living in the area surrounding the new UEC. 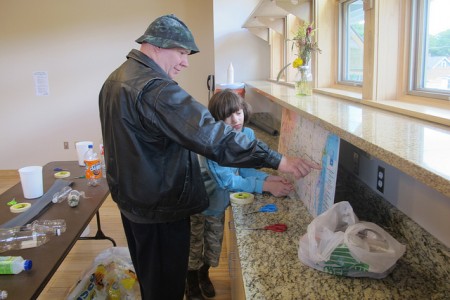 Michael Bean and his daughter Abigail check out a map in a second floor classroom at the Menomonee Valley branch of the Urban Ecology Center. (Photo by Edgar Mendez)

“I grew up near the Milwaukee River but was told to stay away,” Bray said.

Like the Milwaukee River, the Menomonee River, which runs just south of Silver City in the Valley, had been polluted and neglected for decades, and was also off limits to neighborhood children.

Nearly in tears, Bray said that now kids in the area will be able to explore and to really know what it means to have nature in their own backyard.

The neighborhood recently hosted a groundbreaking for a new 26-acre park in the Valley, which the UEC will use as a key teaching tool. The park connects the neighborhood to the Hank Aaron State Trail through the Valley Passage.

The developments in the Valley are all part of a $26 million “From the Ground Up” initiative, created by the UEC and MVP, along with the City of Milwaukee, State of Wisconsin and a dozen other community-based organizations, to connect surrounding neighborhoods to educational, environmental and economic opportunities in the Valley.

Alderman Bob Donovan, who represents Silver City, called the neighborhood the new Riverwest. “This center is another big shot in the arm,” Donovan said.

South Side resident Dennis Martin said that he’d been taking his granddaughter to the Riverside branch of the UEC since she was 4, but now he will bring her to the new center since it’s much closer.

He said it provides a great outlet for his granddaughter as well as other children to get out and learn about nature.

Betty Ho, who lives three blocks from the center, said that it also is a good way to keep neighborhood kids out of trouble. “It’s nice that they will have something to do that will keep them off of the streets,” Ho said.

Living in urban environments such as Milwaukee often keeps people from noticing the natural world that surrounds them, according to Ken Leinbach, executive director of the UEC. But, the new center will help change that for those who visit.

“That’s what this center is all about.”