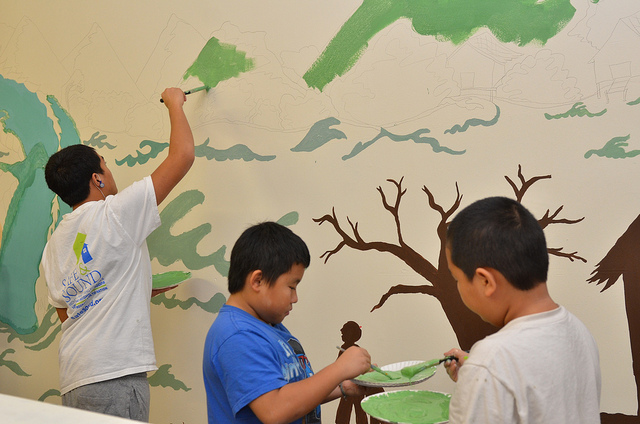 (From left Calvin Moua, Ken Moua and Lue Vue paint in the mountains bordering the Mekong River on a mural depicting a legendary sea serpent. (Photo by Sue Vliet)

A legendary serpent said to live in Southeast Asia’s Mekong River seems to writhe across one wall in the Hmong American Friendship Association as a group of young people fill in the pencil sketch with brilliant shades of green paint.

Aaron Moua, a seventh-grader at Audubon Middle School, isn’t sure whether the mythical creature symbolizes good or evil but guesses that whatever else, it represents power.

On a recent Saturday morning, about a dozen Hmong youth from HAFA and an equal number of African American youth from Neighborhood House of Milwaukee worked together to decorate HAFA’s community hall with murals depicting Hmong history and folklore.

“The purpose of the exercise is to initiate conversation about cultural differences and create cultural competence,” said Safe & Sound community organizer Phoua Vang. 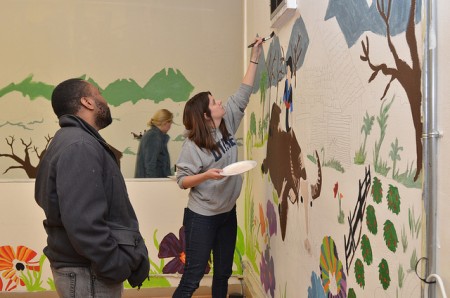 “These youth share the same neighborhoods and the same resources but they have misunderstandings about each other,” Vang said. By working together to understand their own and each other’s cultures, Vang hopes to break down negative stereotypes and build tolerance and understanding among the youth.

She wants them to see that “as individuals, they can have a huge impact on the neighborhood by keeping open minds about the different cultures that they share the neighborhood with,” Vang said. Projects like this also give the young people, who live in a high-poverty area, something to do to keep them safe, off the streets and involved in positive social and learning activities, Vang added.

Moua would like people to understand that “some Hmong people are shamanists (who believe in powerful spirits that can be influenced only by shamans or intermediaries) and they don’t believe in God. And they have their own musical instruments that most people don’t know about,” he said. His cousin Calvin Moua, a freshman at the Hmong American Peace Academy, said he was very interested in the project “because we’re expressing our religion to the people outside.”

Vang designed the mural project to continue the conversation the youth began while working on a “PhotoVoice” project last summer. In that project, the youth assessed and photographed some of their neighborhoods’ assets and liabilities. Then, they walked Mayor Tom Barrett through one neighborhood to show him what they had identified as valuable and what they thought needed to be changed to improve safety.

Two other organizations contributed to the mural project. Milwaukee Habitat for Humanity donated the paint and representatives taught the young people how to restore furniture. Washington Park Partners provided lunch.