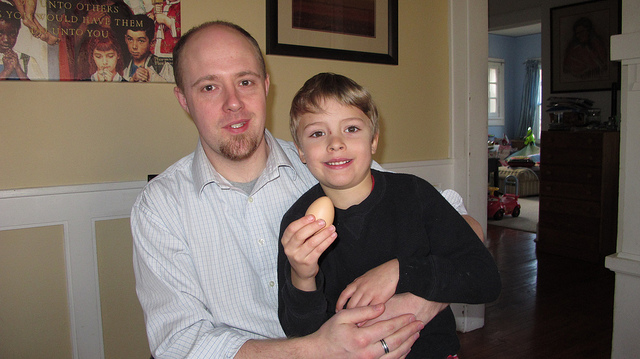 Alex Runner and son Ben, 6, show off a fresh egg from their backyard chicken coop at their Sherman Park home. (Photo by Andrea Waxman)

Alex Runner’s family is one of just 14 households to take out a permit to raise egg-laying chickens since a city chicken-keeping ordinance was passed in May 2011. For Runner, at least part of the appeal of raising chickens relates to his interest in people.

“Alex is an extrovert who draws people to himself. He asks questions, promotes thoughtful discussion, is involved in social media, and likes to engage more than anyone I’ve ever met,” said Runner’s friend and fellow chicken-raiser Rob Stensberg.

Runner, 36, and his wife, Jessie, jumped on the chicken-raising bandwagon early. As Milwaukee Common Council President Willie Hines Jr.’s top aide at the time, Runner had a front-row seat as the ordinance unfolded and won approval.

“We’ve always been a big gardening family,” said Alex, who grew up in Whitefish Bay. After earning a college degree in journalism, he spent two years teaching English in Japan and it was there that he learned to appreciate eating the freshest food, he said. Jessie, now a nurse, was raised with a goat, chickens and cows in rural Genesee. 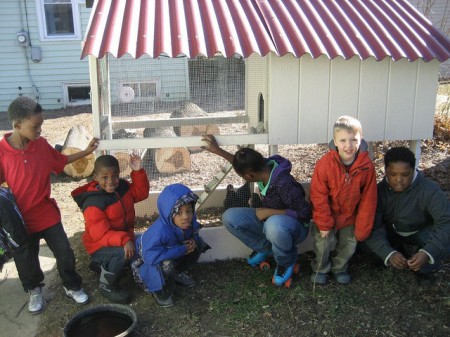 After the chicken ordinance passed, the Runners took a one-day class from the grassroots group Cream City Hens to learn how to choose and care for chickens. The class, which will be offered again in April, taught them the finer points of coop building, breed selection, chicken nutrition, composting waste — there are special requirements when chickens are involved — and a lot about the safety and sanitation of fresh chicken eggs. .

That October, the Runner and Stensberg families bought 10 chicks together. Now their small children have beloved pets and fresh eggs every morning. An added bonus is increased interaction with neighbors, especially children, who are attracted by the novelty of live chickens.

Whether Runner’s interest in and respect for all people was a cause or effect of his Japan experience, there is no doubt it’s a quality that defines him.

“He’s choosing to raise his family in the city and he’s passionate about that. I have seen him on his block interacting with kids who look different from him. That’s a strength of his, to connect with people across cultural and ethnic lines,” said neighbor Dr. Corey Thompson, professor and chair of urban education at Cardinal Stritch University.

Hines was drawn to Runner’s “sincere love for Milwaukee and the community he lives in, his [writing] skills and his energy,” he said. After he hired and worked with Runner, Hines grew to admire him as a loving father with a desire to roll his sleeves up and make Milwaukee stronger, he added.

And Runner loved the job. His four years as Hines’ chief of staff “was like getting a master’s degree in municipal government,” Runner said.

Following in the footsteps of about 20 families from their church who had moved to Sherman Park from Shorewood, Glendale and River Hills, the Runners bought their house at 48th and Meinecke streets in 2005. They were attracted by the neighborhood’s rich history, beautiful architecture and 100-year-old homes, and they wanted to live in a diverse and affordable neighborhood, Runner said. 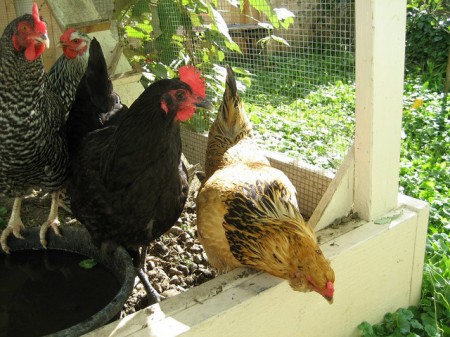 The Runners’ chickens are affectionately known as “the girls.” (Photo courtesy of Alex Runner)

“I think we had a little bit of arrogance when we first moved here,” he said. “We thought we were going to uplift the neighborhood and bring all these resources. But what we really learned was there were all these wonderful families, primarily African-American, who had been here for generations. We came to teach, but we ended up learning a lot more than we teach.”

When his first son Ben, now 6, was born, Runner’s commitment to the city grew in intensity, he said. The family grew with the arrival of second son, Judah, now 2, and the children’s education became a primary focus. With the help of neighbors, the Runners did extensive research and selected MPS’ French Immersion School for Ben. A supporter of MPS, Runner is satisfied that MFIS is as good or better than the suburban school he attended. He believes good schools are the most essential component of a vibrant neighborhood.

Runner regularly brings neighbors together to talk about issues and also connects with them socially. With his gifts for communicating and remembering details about neighbors, Runner builds the fabric of community, Stensberg observed.

Reflecting on the community, Runner noted that it’s no different than any other neighborhood: solutions to individual and community problems are complex. “Diversity is such a buzzword, but there are so many layers to diversity, to a marketplace of ideas. There are a lot of attractive things about living here along with the difficult things.”